How to travel by air with a wheelchair

Airports and airlines offer a special service for passengers with reduced mobility. Since many people today are travelling, it is useful to remember what to do in these cases.

Major airlines operating in Spain have already announced they will cancel half of their scheduled flights due to the general strike on Wednesday November 14.

The speed limit on Spanish highways will be 120 km/h from the first day of July. The Government decided not to extend the limit of 110 km/h launched in March to alleviate high oil prices, although it has served to save as much as 449.7 million Euros.

Today and at least until 30th of June has come into force the new speed limit on Spanish motorways. The Council of Ministers approved on Friday these measures to reduce energy consumption. Also will be applied fines for driving at a speed exceeding 110 km/h.

As of March 7th, transiently but without a fixed deadline, the maximum speed on Spanish motorways and highways will be 110 kilometers per hour instead of 120 km/h and the price of tickets for middle distance trains and suburban trains will be reduced in 5% 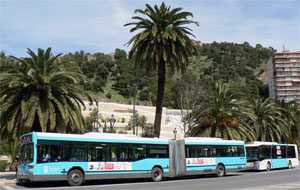 Currently public transport in the Costa del Sol is still deficient in many sections and municipalities, and therefore many travelers and tourists choose to a rent a car at Malaga airport if they need to move at their holiday destination with greater freedom and without relying on buses

British Airways turns its attention towards Malaga and Malaga airport in its expansion of flights for the upcoming summer season, which starts on March 27th, 2011. The company announced yesterday that it will double the daily flights offered in this campaign between the capital of the Costa del Sol and the UK. British thus joins the largest air corridor originating in the UK, Malaga-Gatwick

The general strike in Spain was convened for the 29th of September by the C.C.O.O. (Workers’ Commissions) and U.G.T. (General Workers’ Union). This strike will affect especially public services, such as hospitals, schools, courts or public transport. The Ministry of Public Works has agreed with unions on minimum services both in the air transport and railway. Some flights may be cancelled, affecting also Car hire Malaga airport companies