The 5 Most Impressive Views Of Malaga

No wonder that tourism in Malaga has grown so much, even in the winter months, as the province of Malaga hosts some of the most beautiful landscapes of Spain. Here you can see a list of which – in our opinion – are the 5 most impressive views of Malaga:

The 5 Most Impressive Views Of Malaga 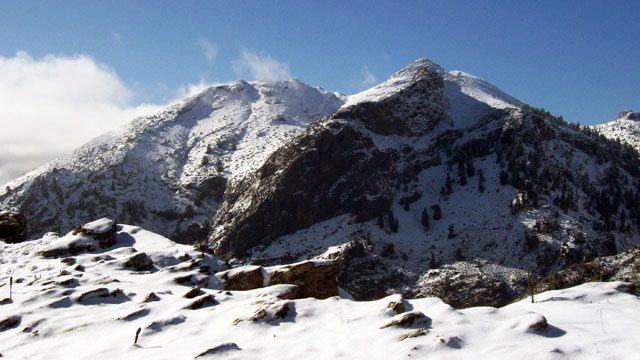 Torrecilla Peak is part of the Natural Park of Sierra de las Nieves, located on the western side of the province of Malaga. This mountain reaches 1.919 metres, being the highest peak of this mountain range and the second highest in the province (only surpassed by La Maroma). If you like hiking or cycling routes, you have to visit this place. There are a large number of routes in Internet indicating how to ascend Pico Torrecilla. From above you can see the beauty that holds the Natural Park of Sierra de las Nieves, especially in the winter months, when snow covers much of the surrounding mountains.

How to get there: https://goo.gl/maps/zQyLLLmoNMiQXDeb9

You probably already know this particular cliff, not only because there was filmed the legendary television series “Blue Summer” but also for being one of the resort towns of the Costa del Sol. The views from the Balcony of Europe from its ledge may produce a slight tingling in the stomach, and even a slight sense of vertigo, but it’s worth it. Don´t forget to bring your camera!

If you rent a car at Malaga airport, you can get to Nerja in just over an hour. It is an excellent place to sample the local cuisine; in fact, many of the bars and restaurants offer tasty tapas with typical food of the area.

How to get there: https://goo.gl/maps/xMchrRMJ13mJnEJK9 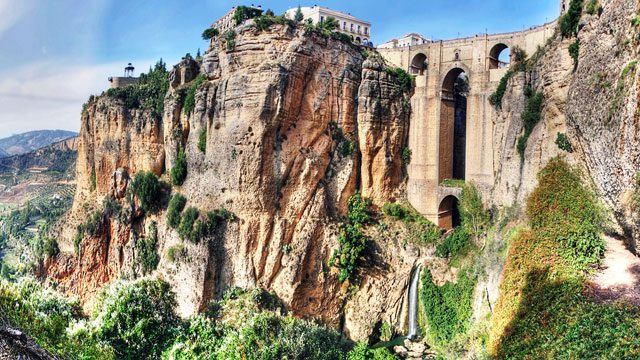 The well-known “Tajo” is the ultimate symbol of Serranía de Ronda, the main reference of rural tourism in the province of Malaga. The New Bridge connects the Old Town with the modern part, providing truly breath-taking views. The streets of this city and the surrounding natural environment will delight lovers of photography. Do not miss the craft shops!

How to get there: https://goo.gl/maps/6kb4G1PZawjb1fUH9 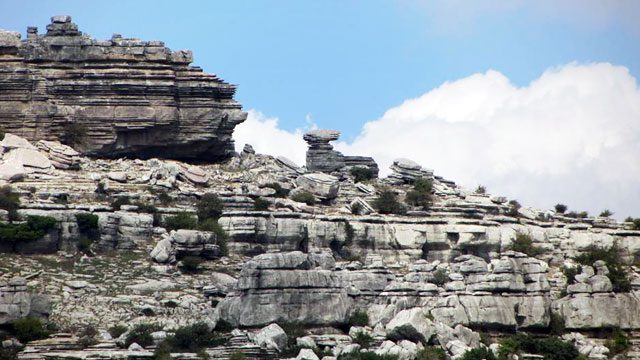 El Torcal de Antequera is composed of striking rock formations which took their present form due to the effect of water, which for millions of years passed through this area located at more than 1.000 metres above sea level. You can access by car until the Torcal Interpretive Centre and from there follow different routes on foot into a forest of stone where the shapes of the rocks resemble animals, vehicles and other everyday objects.

How to get there: https://goo.gl/maps/Th54mrcszBNsPDNX8

And in the first place, to end our list, we have chosen the chilling “Caminito del Rey”. This singular passage, just one metre wide, winds about 100 metres high along the Gaitanes Gorge. The poor condition of its paths and the lack of safety fences gave this place for years a reputation as highly dangerous, due to several fatal accidents.

In 2015, after a year of restoration, the Caminito del Rey was officially opened to the public and today is one of the most visited natural places in the province of Malaga.

How to get there: https://goo.gl/maps/ATueskGs6eyUtYEv7

You can find in this Blog entry everything you need to know to visit the Caminito del Rey.

These are our favourite corners of Malaga, although there are many more we could mention. If your favourite place is not on this list, do not hesitate, write a comment and share!