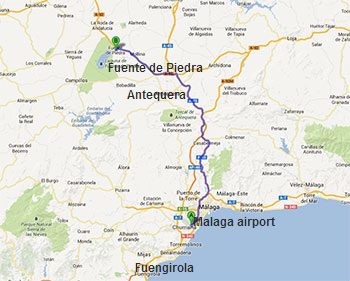 Viewing this image of Flamingos probably the first thing that comes to mind is that it was taken in one of the large wetlands in Tanzania in Africa.

Well, it turns out that this natural wonder is located in the north of Malaga province.
About 50 minutes’ drive from Malaga city is situated the Laguna Fuente de Piedra, a protected natural area which this year has a record number of flamingos due to abundant rainfall. The lagoon is one of the most important wetlands in Europe, the reference in the Mediterranean and one of the top five in the world.

Since Flamingos are still breeding and the chicks need three months to learn to fly, it is still early to know when the traditional banding will be held, although the forecast is that it will take place in the month of August.

The Laguna de Fuente de Piedra Nature Reserve is located in the northwest of the province of Malaga, about 75 kilometres from the capital and near the border with the province of Seville.

In the Peripheral Protection Zone there is a Welcome and Information Centre, as well as several areas with bird hides from which the birds can be observed without disturbing them. Visiting Hours: Monday to Sunday: 10 am to 2 pm and 4 pm to 6 pm

It’s quite easy to get there; so if you´re tired of seeing roasted bodies on the beach, just take one of our fantastic cars and head north, on the A-45 (or alternatively the AP-46 toll road) to Antequera and then take the A-92 to Fuente de Piedra.

You´ll be travelling through the Mountains of Malaga, passing by the Village of Casabermeja (famous for its white cemetery), and a little further the eye enjoys sweeping landscapes without buildings, only a few farmhouses in the distance; you´ll pass close by the stunning lime stone formations of El Torcal, the city of Antequera with a rich archaeological and architectural heritage and the prehistoric Dolmens of Menga.

A very appealing day trip with lots to discover, don´t you think?

A personal tip: If you go to Fuente de Piedra to see the Flamingos, you can leave early in the morning and return spending the hot noon hours savouring typical dishes in the restaurant of Torcal Alto before returning to the Costa del Sol. The Guadalhorce and Guadalteba Reservoirs