Due to the mild climate and a pleasant mix of culture, nature and leisure at the same time, more and more tourists discover Malaga as an attractive holiday destination only a few hours away.

Because of its diversity the coastal region of Malaga in southern Europe is developing into a popular holiday destination, attracting throughout the year a large number of tourists. In the streets can be found holiday makers of all age groups; this is due to the fact that Malaga has not only a very good infrastructure but also a wide variety of recreational activities.

Often it is not only a holiday: Many tourists return, students extend their stays abroad and especially retirees decide to settle here, so that the residence tourism is growing annually.

What makes Malaga so special?

The Costa del Sol as a vacationer’s paradise; Malaga is located on the Costa del Sol – one of the most popular coastal regions among holiday-makers. The Mediterranean only rarely has waves and invites young and old to swim, which is even possible in late October, early November. 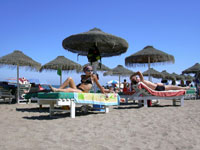 For vacationers who prefer to sunbathe on the beach, is well taken care of: Beach bars won´t let you starve and the most popular beaches have available a large offer of leisure activities. Who does not want to lie on the sand can rent beach umbrellas and sun loungers.

Besides the sea as a heat regulator, the mountain range of the “Montes de Malaga” protects the area from storms and cold winds, although the weather can get a little bit rougher in the coldest months from December to February. The mean minimum temperature is around 13° C, the mean maximum temperature at 22.8 ° C.

Apart from the sea, beach and the mountains of Malaga, the historic centre of Malaga has as well a lot to offer: Many historical sites, Churches, the Cathedral and numerous museums. 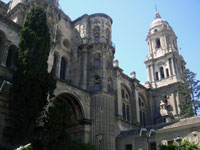 The famous cathedral is located in the old town and has an incomplete built tower, which is why it is referred to as the “little one-armed lady”. The most famous museum is the Picasso Museum, which gives together with his birthplace a great overview of this famous painter.

The fortress castle Gibralfaro as well as the Alcazaba and the Roman Theatre are just some of the obvious legacy of the Phoenicians, Romans and even Arabs. From Gibralfaro one has the best views directly on the sea, the beach promenade and the harbor, and a part of the city.

If sightseeing is not scheduled in the holiday planning, the old town is perfect for shopping and offers restaurants of all kinds, tapas bars, cafes and bodegas. While the latter are distributed throughout the Old City, the largest and most popular shops are situated in “Calle Larios“, and adjacent streets.

The most appropriate time to explore the culture of Malaga is the Holy Week, when are taking place impressive processions. Also is recommended the time around middle of august when takes place the popular Malaga Fair, with plenty of celebrations day and night.

This described versatility of the charming southern coastal strip is the reason that brings here together very different people from all over the world. Not to forget the very animated nightlife in Malaga. Due to the excellent transport network of buses, as well as trains, especially at Malaga airport, it is easy to arrive and travel around the Costa del Sol. If you want a little more independence, you can find excellent deals on car hire at Malaga airport.

For those who plan to hire a car, check our Malaga driving routes.

Related posts
Malaga and the Costa del Sol, always worth a visit
Heat wave on its way to Malaga
In Malaga and southern Spain there is still a lot of summer ahead