The 10 best dishes from Malaga for Christmas

When you visit Malaga during Christmas and the New Year, you should not miss the tasty local cuisine that brings together the best of the Mediterranean diet.

We asked colleagues and friends from Malaga, to find out what their favourite dishes are for this time of year and what they have been preparing traditionally at home and we have compiled the 10 best dishes from Malaga for Christmas. With the wide variety of restaurants available in Malaga, it will be easy to find all these delicacies during your visit to Malaga at Christmas.

The 10 best dishes from Malaga for Christmas

Due to the great selection in typical Malaga Christmas Gastronomy we have compiled the most popular dishes, surely it will make your mouth water as you pass through the different sections!

Board with cheese and iberian ham

In many places, they start with a snack to whet the appetite. In Malaga, probably the star dish would be a board combined with typical Malaga cheeses and Iberian ham. 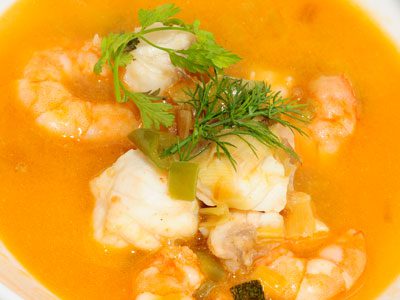 A typical dish of Malaga is the Picadillo Soup (Sopa de Picadillo), a soup with minced poultry, hard-boiled egg, noodles and cubes of Serrano ham and decorated with a touch of mint.

Another option is the delicious AB Vineyard Soup (Sopa Viña AB), named after the white wine that is added to it; a classic gazpachuelo enriched with prawns, shrimp, rice and peas. It is perhaps the most typical Malaga soup of all. 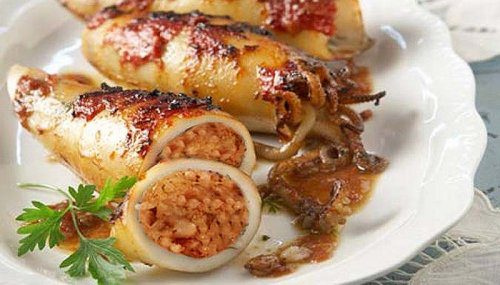 Many people in Malaga do not usually eat fish as a main dish at this time of year, as they have this delicacy all year round and many associate it with a more summery meal taken in the chiringuitos (Beach Bars). A popular seafood dish however is the Stuffed Squid (Calamares rellenos) with minced meat and seafood in almond sauce.

Many homes prepare roasts, larded meat, turkey rounds or pork rounds or roast lamb grilled and served with their sauce.

Larded meat (Carne mechada) is a traditional and popular meat in southern Spain that is usually prepared with pork, although it can also be made with beef. 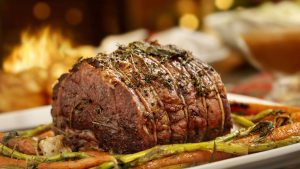 Loin in Lard (Lomo en manteca) is another typical recipe from the mountains of Malaga. Its ingredients are loin of pork, lard, sweet paprika, oregano and laurel.

Roasted lamb (Cordero asado) is another favourite Christmas dish of many locals, accompanied by “patatas a lo pobre“, which are potatoes fried in abundant oil with green peppers, onions and eggs, in the purest Malaga style.

And last but not least, we would also like to mention the pork fillet (Solomillo de cerdo) with Malaga muscatel wine, raisins and pine nuts.

The usual drinks (usually alcoholic) that accompany dinner are cava and white wines for seafood and fish and red wines for meat.

Lemon sorbets are also very popular as a light digestive, to make room for desserts! Typical Malaga sweets are borrachuelos and bienmesabe, accompanied by a glass of Anisette.

Here we have prepared for you a small selection of restaurants in the province of Malaga that open at Christmas, with vegetarian and vegan options. Reservation is essential!

We are happy to hear your suggestions and recommendations to expand the list!