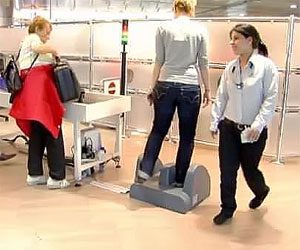 The sad image of barefoot passengers passing security checks will be history within a few months at Malaga airport. This terminal, along with fourteen others, has been chosen to deploy a total of 106 equipments of metal detectors in footwear, as reported by Spanish Airports and Air Navigation (AENA).

With these new measures would expedite the boarding process and uncomfortable situations for the passenger will be eliminated.

These new detectors will complement the 133 units installed between 2008 and 2009 at the airports of Madrid-Barajas, Barcelona-El Prat, Palma de Mallorca, Bilbao, Alicante, Seville and Santiago.

Aena explains that during this year will be installed 81 equipments, while the remaining 25 will come into operation in the first quarter of 2011. The airport manager emphasized that the operation will make more comfortable and smooth the process through the filters.

See how Magshoe works on this video:

Next time you travel to Malaga, after returning your car hire at Malaga airport, you will probably have to pass through a Magshoe, so remember to double check that there aren’t coins or any metallic pieces inside your shoes to avoid being inspected.

Staying safe and secure with MalagaCar.com