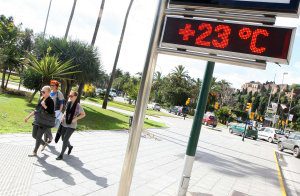 These days the striking news is about a prediction of “a year without summer” by French meteorologists. The truth is that lately the weather is a bit choppy, but will it be so bad? What do you think?

According to this meteorological model, this summer will be fresh and humid; but, not wanting to offend anyone, why do our clients come to the Costa del Sol, if not to escape from cold, damp weather (even in summer)? Joke aside. We did some research and some points seem very sensational, while others may have some truth.

Summer often does not present itself very promising in many European countries and even in the north of the peninsula the summer weather can vary from about 15 to 20 degrees Celsius compared to the south.

So, meanwhile there don´t occur mayor volcanic eruptions like the one in 1816 which caused the real “year without a summer”, if on the Costa del Sol it cools down a few degrees and it rains occasionally, we can still enjoy a great summer.

Nor can we forget that we are still in spring, which generally tends to be more unstable. Here in Malaga, we have had already a couple of days with 30 degrees Celsius (86ºF) and currently temperatures are between about 17ºC (62.6ºF) in the morning and 25°C (77ºF) during the day.

And if there is really bad weather you can still gather with good friends like Lord Byron did with his physician John William Polidori, Mary Shelley and her husband on a stormy night in the dark and cold summer of 1816 and let your imagination run wild… giving birth to “Frankenstein” and the original story of “The Vampire”. The Best Family Hotels on the Costa del Sol