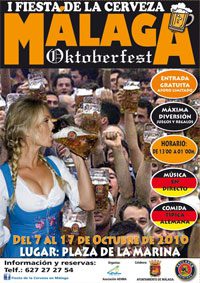 In Malaga city will take place the first edition of the German Beer Festival, from 7th to 17th of October, on the square Plaza de la Marina. This event is aimed to revive the world-famous Oktoberfest of Munich, where beer is the undisputed star.

The event will be held in a large tent on the Plaza de la Marina, decorated with German motives and with live music. In addition to 30,000 liters of best Paulaner beer, visitors can enjoy sausages, pork spareribs, chicken, German sausage, Bavarian cheese, desserts and Bretzel, at an affordable price. There will be also entertainment, games and gifts. You can enjoy German Paulaner beer in different varieties.

The tent has space for more than 1,000 people and will be equipped with the typical large wooden tables and benches. Opening hours are from 1 pm until one o clock in the morning.

Malaga, past and present (Video)
Discounts at 11 Spanish Airport shops during this week, including Seville and Malaga
Related posts
3rd Great Beer Festival in Fuengirola