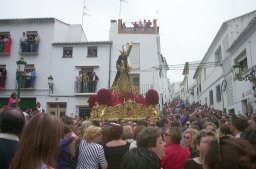 Alora has a great culture and popular festivities like the gastronomic day, one of the most important and known as the "Perotas Soup Day", dedicated to Alora’s most traditional dishes and celebrated every mid October.

- The Holy Week (Semana Santa) is another popular festivity in the municipality, typical of the Christian religion.

- Another festivity worth mentioning is the "Flamenco Song Festival", celebrated during the month of July.

- The first week of August is the local fair which takes place in the Fuente Arriba square. - Other religious festivities are celebrated at the beginning of September.

- The carnival takes place in February and with shows all around the village.

- 'Cruces de Mayo' (Crosses of May), originated in the 18th century and carried out on the borders with Almogia and Cartama, where on the first Sunday of every month of May they organise a festival with tastings of typical products of the area. It’s a very recommended festivity for its touristic interest.

- 'Verbenas', that are small festivals carried out during the months of May and June.

Out of all the popular traditions in Alora, the ones that most stand out are: the fandango of Alora, the songs of the plough and threshing; Alora is considered to be the birthplace of 'la malagueña', a typical dance that was born in the early 20th century,