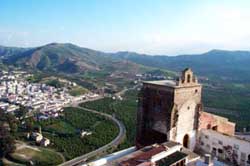 This municipality, situated in Malaga province, is located in the Guadalhorce valley area and has a long history that dates back to prehistory although the village itself is originally Arab. It’s situated near the train route that goes from Malaga to Seville, Cordoba and Granada, and has beautiful landscapes nearby like the ‘Desfiladero de los Gaitanes’ (that Alora shares with Ardales and Antequera), Sierra de Huma and Sierra de Aguas Mountain ranges.

The Alora area has been inhabited from prehistory with the presence of Tartessians and Phoenicians, who built the castle’s foundations that later on would be used by the Romans, who left us important remains and converted Alora into an important trade centre of wheat, barley, honey, wine and oil, products that could be obtained from the place itself, making Alora a prosperous place and even with their very own coin. 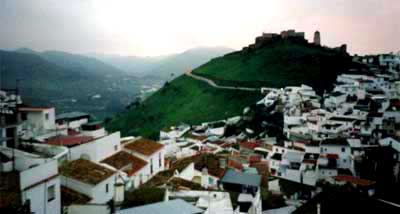 During the middle ages and the Visigoth invasion was probably built the rest of the fortress, which later on was enlarged by the Arabs after their entrance into the peninsula from the south, who managed to defend it until 1484 leaving behind several stories like the well-known “Romance de Alora” that relates the death of Don Diego de Rivera caused by a betrayal in front of Alora’s walls.

Alora had around 500 inhabitants in the 17th century and was the scene of many fights between the different political ideals until the beginning of the 20th century.

The large number of civilisations that have passed through Alora have left us a wide variety of monuments that we can visit today. Amongst them we should mention:

Transport and how to get to Alora

There are three train stations in Alora that connect to Malaga, one of them is a suburban line and another two middle-distance lines situated in El Chorro and Las Mellizas.

There is also a bus service available with the following routes:

From Malaga it’s about a 40 minute drive (38 Km.) by car. You can hire a car in Malaga with us and use our route to go from Malaga airport to Alora.

Another option is to take a Malaga airport taxi to Alora.