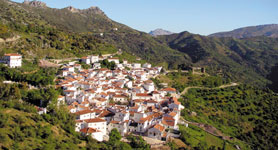 Benadalid is a small municipality that is one of the Andalusian small white villages, situated in the Ronda mountain range.

Currently, it’s an important destination of rural tourism in Andalusia that offers the visitor the option of discovering part of the area’s cultural characteristics and tasting its rich culinary tradition. 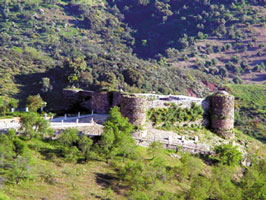 If we decide to visit this municipality in the province of Malaga, we’ll find a castle with a possibly Roman origin, that later on passed on to belong to the Arabs and was rebuilt in the 17th century. Today it’s a cemetery. This castle visually sums up the history of Benadalid, a history that we’ll analyse here below:

The roman origin of the small fortress is an unequivocal proof of its origin, although there may be unfound remains of previous inhabitants that have yet to be discovered.

Benadalid was conquered by the Bereber Empire in the year 711, from when it obtained its name. In the 13th and 15th centuries it was alternately ruled by Granada and Africa.

In 1492, the Christian army invaded and expelled the Moors fearing that their religion would fragment in the year 1570, also destroying the Arabic public buildings that were built.

Benadalid was passed over from one to another and gradually repopulated until its castle finally ended up in the hands of the duke of Medinacelli, who ceded it to the town hall to be used as a cemetery in the 19th century.

During the Spanish Civil War the entire village’s religious archives and pictures were destroyed.

Benadalid: Festivities and places of interest

Benadalid has several religious festivities from the times of the Conquistadors of which we have to highlight the representation of Moors and Christians:

If you visit Benadalid you should visit the Humilladero Cross, built in 1776, where 2 brothers of Portuguese origin, that came to work on the enlargement of the churched, participated. These brothers got married and are the origin of the majority of the surnames “Fernandez” that exist in the village.

A 70 Km. route through well looked after roads in good conditions, it shouldn’t take more than an hour to get to Benadalid from Malaga airport. If you need a vehicle when visiting the province, do not hesitate to compare car hire prices at Malaga airport with us.

On the map below you can see our marked route which is the most recommendable, you can choose the toll road or the road that borders the whole coast.