This cave is situated in the locality of Maro, inside the municipality of Nerja, in the province of Malaga. The Nerja Cave was discovered in 1959 and hosts the first artistic representation known to humanity that dates back approximately to 42.000 years ago and was found in 2012. In these particular paintings one can see drawings of seals, a very common animal on the coasts of Spain until mankind caused their extinction in the early 20th century. 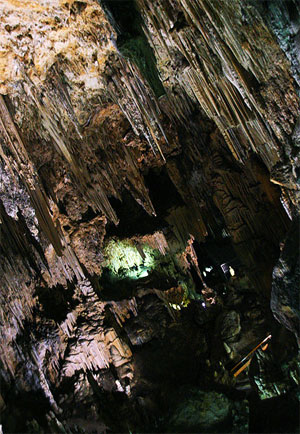 The discovery of the cave was a lucky coincidence as it was found by a group of friends searching for bats, who entered the cave and found skeletons and ceramics, which they would later on tell their friends, teachers and family, which was how the word began to spread.

The cave proved to have a great archaeological value so it began to be restored to adapt it to the public.

History of the Nerja Cave

The cave was discovered by 5 lads that were in the area hunting bats in 1959, who, whilst investigating a fissure in a well-known well, discovered that in its interior there was a great empty area and even skeletons lying next to ceramics, which caused them to run out of there and went to notify what they had found.

The second official visit was carried out by a doctor and a photographer, who gave the Nerja Cave its international fame for its important findings, which also caused its opening to the public which occurred once they had built an easier access than current access back then via the well of the Mine. Finally, the Nerja Cave was inaugurated in 1960.

Investigations in the Nerja Cave

The investigation research have not concluded in the cave and they are still investigating to continue to discover the entire cave and its different galleries.

The last finding in the Nerja Cave was some painting of seals, that dated back to 42.000 years ago and possibly drawn by the Neanderthals.

There are galleries that are not yet accessible to the public like the so-called upper galleries and the new galleries with important formations and prehistoric remains.

The Nerja Cave, only a year after its opening was declared an Artistic Historical Munument and an Asset of Cultural Interest, and part of the Spanish Historical Patrimony.

Characteristics of the Cave

The cave is made up of 3 main areas that we can differentiate, and that at the same time are divided into different galleries:

These galleries are open to the public, so you’ll be able to visit each one of the galleries that we have enlisted here below:

The following galleries are not open to the public, whether it’s because they are being investigated or because their access is complicated:

In the upper galleries we’ll find the following listed below:

Due to the discovery of some paintings representing seals and some organic remains found next to them, they have dated the human presence in this cave in 42.000 years, being until now the first artistic representation known to mankind made by Neanderthals.

The Nerja Cave is an asset of cultural interest, declared artistic historical monument in 1961, a place that is undoubtedly worth a visit if you find yourself in the province of Malaga.

Prices and information about the Nerja Cave

How to get to the Nerja Cave

All you have to do is head towards Nerja and follow the different signs you’ll see along the road. The Nerja Cave is very well and clearly signposted so it’s easy to find.

If you need help, check our section about Nerja for finding out how to get from Malaga to Nerja.