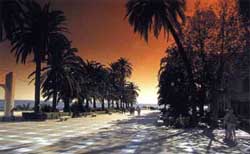 Nerja’s municipality is situated in the easternmost part of Malaga province, on the Costa del Sol. This originally Muslim municipality is the chosen place for more and more tourists who want to enjoy not only its beaches and good weather but also its scenic beauty and its hospitality.

Near Nerja we’ll find Sierra Nevada and Sierra de Almijara, a natural reserve that we can visit if we find ourselves in the area.

In the famous Nerja Cave there have been found remains of paintings of seals which have been dated back to more than 42.000 years ago, being the first works of art known to mankind.

There have also been found remains of settlements that are approximately 20.000 years old in the Nerja Cave.

The arrival of the Romans around the year 210 before our era brought the foundation of three villages in the eastern part of Malaga; amongst these villages was "Detunda" (Maro, belonging to Nerja) where they have found numerous roman remains.

It wasn’t until the arrival of the Arabs after their victory against the Visigoths in the year 711, when Nerja began to have its own personality and joined the Arab cultural revolution that was taking place in Al-Andalus, in which the women had rights and the chance to work; and both oriental and occidental texts were translated.

The Muslims knew Nerja by the name of “Narixa” which means “abundant fountain”. 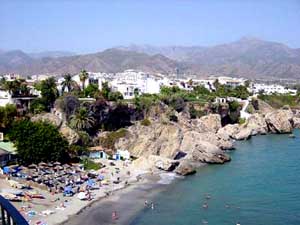 It was in the year 1487 when Nerja finally lost to the Christian armies, and after a period of coexistence, the Christian religion finally radicalised, causing a Moorish rebellion and forcing both Jews and Muslims to escape. After this, the area was repopulated by people brought down from the north of Spain, although the fear of the constant pirate attacks made the growth of Nerja slow and unstable, building towers over the years all along the coast to communicate rapidly when an area was invaded by sea.

The creation of the majority of Religious buildings began after the conquest of the Christians, like the churches in Nerja and Maro. In 1697 they built the church of El Salvador and then in 1720 the chapel of Las Angustias.

The 17th century could well be considered the golden century in Nerja, during which they built a road that communicated with the capital city. With a population of around 8000 inhabitants, it was the century of growth and street improvements, which were stone paved.

It was as from 1950 when Nerja began to witness a growth thanks to the tourism along the Costa del Sol and the discovery of its caves.

Nerja has a great amount of attractions for all kinds of tourists, from those who like to wander around its natural landscapes, enjoying the monuments and architecture, to those seeking the best beaches to sunbathe and enjoy the Mediterranean.

Situated near Maro, it’s one of the most important touristic interests in Malaga province. It has public and restricted accesses, and hosts the most ancient paintings discovered by mankind, with an estimated date of about 42.000 years ago.

Situated in the centre of the village, this viewpoint looking over the sea is the meeting point for the tourists as well as the locals due to its spectacular views. It was named this way by Alfonso the 12th who, after leaning over this balcony and taking a quick glimpse, thought that this point seemed as if it were the place where the European continent ended.

Aqueduct of the Eagle

Built in the 19th century to carry the water to the watermills of an old sugar factory.

A 17th century religious building with fresco paintings in the dome.

One of the few sugar factories situated on the coast of Malaga that is still preserved.

Nerja has beaches where we can enjoy a pleasant sunny day. Amongst these beaches, the following are worth mentioning: Burriana, Calahonda, El Salon, La Torrecilla and El Playazo....of which some of them are still unspoilt beautiful natural areas.

Nerja is accessible from the motorway and has a bus service that is generally extended during the summer season.

If you wish to get there from Malaga using public transport, the only bus that will take you from Malaga to Nerja, passing through Benagalbon, is the M-362. If you prefer to hire a car in Malaga, we recommend you to check out our prices, we are a reliable, trustworthy company for your transport.

Other option is a Malaga airport transfer to Nerja, fast and easy with a driver talking your own language. Following the link you can find the prices and make the taxi reservation online.

On the map below you can see the recommended route from Malaga to Nerja by car: