When you visit the city, we strongly recommend visiting the monuments in Malaga and the places of tourist interest.

Malaga is a very ancient region, the human presence dates back to prehistoric times with small groups that have left their mark in cave paintings; later the Phoenicians created the first towns leaving remains of a wall in the first port of Malaga; the Romans had an important presence in the city; the Arabs introduced a great cultural advance and a rich architecture; later the Christians built a great number of religious buildings with beautiful architecture.

One of the architectural remains bequeathed by the civilizations that have passed through the province is the Roman theatre located at the foot of the Alcazaba, so you can visit the two monuments at once, monuments that are the featured landmark of Malaga.

Let's focus for now on the city, although there is much more to discover throughout the province. We encourage you to continue reading to learn a little more about all the monuments in Malaga that you will find:

The most emblematic monuments in Malaga are undoubtedly the most popular. You should not miss the opportunity to visit them if you are in the city.

The Alcazaba, built next to the Roman theatre, was built using a hill and is adapted to the terrain. Its construction began in the 8th century and part of the materials of the Roman theatre were used. The construction was completed in the 11th century and has been part of the city's landscape for centuries and one of the monuments not to be missed.

The castle of Gibralfaro was built with the intention of defending the Alcazaba during the 14th century. It is situated on top of the hill and has been restored. It offers spectacular views from where we can take the most beautiful photographs of Malaga. 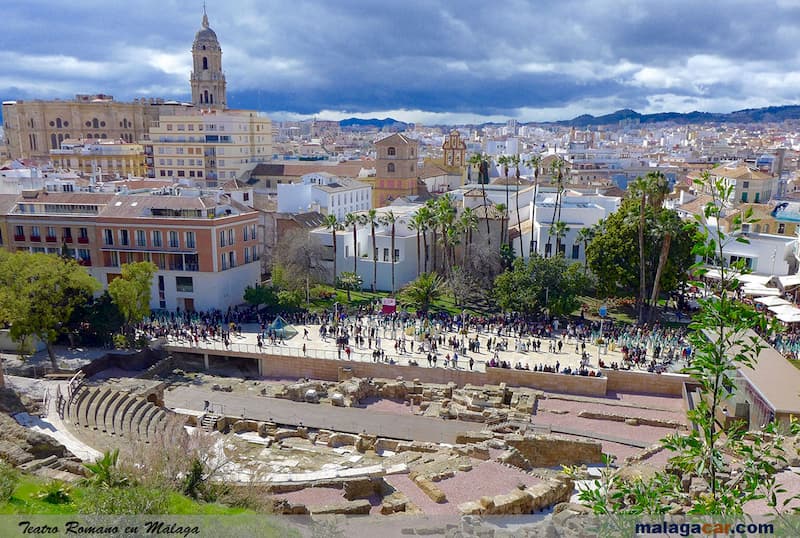 You can hardly omit the visit to this monument if you plan to visit the Alcazaba, since it is at its feet. The Roman Theatre was built during the 1st century and was in use for more than 200 years; part of the citadel was built in its day using materials from the same theatre.

If you like to know about monuments or historical places you can continue with the following list; we are sure you will love it: 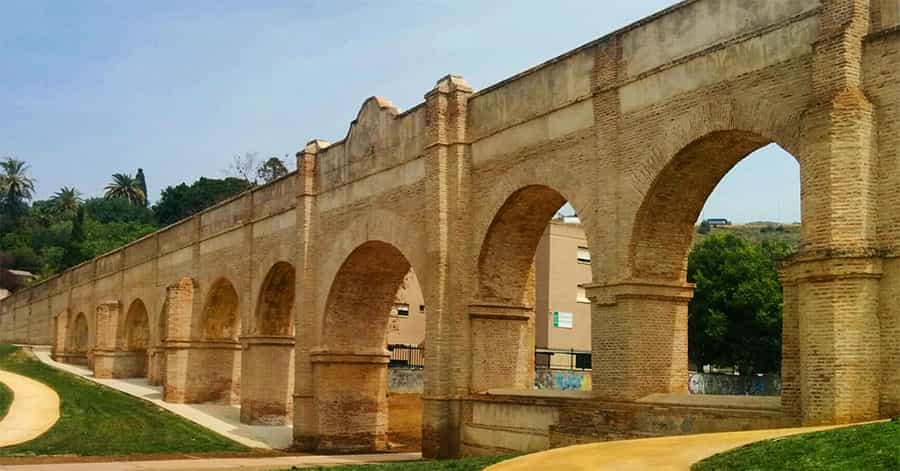 During the 18th century this great hydraulic construction was built to bring water to Malaga. It is one of the largest hydraulic works of the eighteenth century in Spain and fulfilled the function of carrying water from the river Guadalmedina to the city.

The aqueduct was the result of the rapid growth that the city was experiencing and was more than 10 kilometres long. Its origin can be found in the Inca Mill.

Although the house itself does not have a great historical value known beyond the curiosity that may emerge in the visitor, itis a place that offers beautiful views of the surrounding landscape in the middle of nature.

Ideal location for a hiking route and enjoying beautiful views of Malaga in a natural and peaceful environment.

This place has been discovered using Google Maps and it does not appear in any guide as far as we know.

During the Muslim period there was a wall that surrounded the city centre and protected it from invading attacks. Today there are few remains but parts of the wall can still be found in good condition. This one in particular can be found both on the outside of the bookshop and inside; it had a door that received the name of Puerta de Buenaventura and it was a very popular passageway according to the writings of that time.

There are other locations of Malaga with remains of the old wall, the street Carretería follows the old layout:

In addition, the Plaza de la Marina car park and the Muelle 1 car park in the Port of Malaga have also the remains of old walls.

This old Malaga street is the typical long, narrow street of Muslim origin. Formerly it was called Calle de los Guardas, as it is where numerous houses were distributed to the squires of the guards of the armies after the conquest of the city. You will find the Carmen Thyssen Museum, the Tourist Board Office as well as other historic buildings worth seeing.

Walking from Constitucion square the street ends where it was the ancient Muslim wall, but today it connects with Puerta Nueva street.

Malaga has numerous Renaissance and old buildings of great architectural value. If you take a walk around the city or visit some of its museums you may wonder about the origin of some of its historic buildings:

The Buenavista Palace currently houses the Picasso Museum. It is a Renaissance construction of the sixteenth century built over Phoenician ruins.

Palace of the Marquis of Valdeflores

If you walk along Carretería street you will find this old building which is currently a centre of the Malaga Town Hall. Its origin dates from the eighteenth century and was built attached to the old wall that surrounded the city.

Former residence of the first Counts of Buenavista that was built during the 18th century.

It currently serves as the Chamber of Commerce in the city of Malaga.

This beautiful construction of the XIX century was initiated with the objective of converting it into Customs by the increase of the trade with America. After numerous delays, it was inaugurated in 1829 as the Royal Tobacco Factory, the headquarters of the Treasury since 1839 and later as a sub-delegation of the Government.

It is currently the Museum of Malaga.

Regional style built between 1923 and 1927 by Tabacalera, a former Spanish monopoly established in 1636.

Tabacalera was the oldest tobacco company in the world that, like other public companies with large profits in the modern times, was sold by the Spanish government. The building currently houses the Malaga Automobile Museum and the Collection of the Russian St. Petersburg Museum.

Cathedrals and churches in Malaga

During the year 1489 the Catholic army managed to take the city after a bloody battle. After the seizure of Malaga they began to build religious buildings on the conquered land:

This cathedral was built during the fifteenth, sixteenth, seventeenth and eighteenth centuries on top of an old mosque. It is located in Molina Larios street and has a museum inside and two eighteenth-century organs with about 4000 pipes. 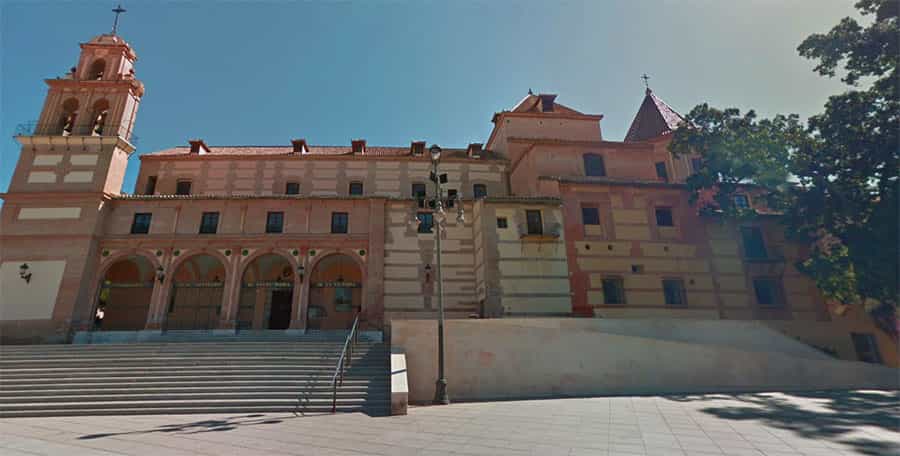 A religious centre dedicated to the cult to the Virgin of La Victoria, inaugurated in the year 1700 by the Catholic Kings and where the Pantheon of the Buenavista Counts is located. 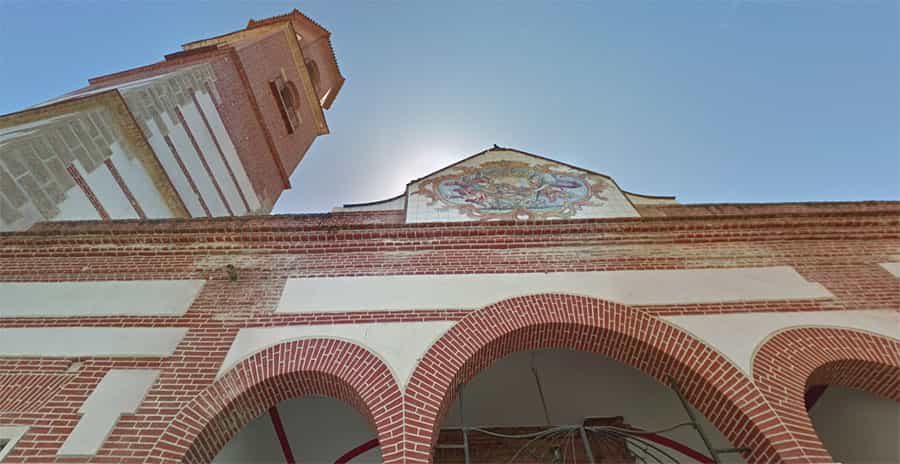 Founded in 1491 shortly after the conquest of Malaga, it was ordered to be built by the kings with the aim of promoting the cult of Ciriaco and Paula, who were murdered in the year 303 by the Romans in Malaga. They were tied up in a tree near the river Guadalmedina and stoned to death. The place where they died is assumed to be the actual Avenida de los Martiricos (avenue of the Martyrs).

It is one of the first 4 temples built after the conquest of Malaga in 1487.

A late 15th century Moorish style religious building that was used in 1638 as a shelter for the victims of the great pandemic plague.

This is one of the first 4 temples built after the conquest of Malaga in 1487 although it was later reformed in 1760.

It has been declared an Asset of Cultural Interest and is part of Andalusia's historical heritage.

It was built during the eighteenth century initially as a personal chapel of the Count of Buenavista and was located near his palace. It has objects and paintings of great artistic value inside.

This 16th century convent is located in the old Caballeros street (now renamed to San Agustín), on land that was purchased by the Augustinian monks in 1576. The construction was changing hands during the centuries between the city council of Malaga and the bishopric, who did not want to give up the property. Currently there are plans to rehabilitate the space and turn it into a public bookshop.

This 16th century building was built on Cister Street and renovated in 1878. In 2009 the convent was closed due to the lack of nuns. Only 4 nuns remained, they had to follow a vow of silence and obedience just as in the Middle Ages in our days.

Inaugurated in 1800 and founded by a brotherhood; it is of baroque style. It is also known as Capilla Faro de la Victoria (Lighthouse Chapel) or Capilla del Rescate (Rescue Chapel).

Church and hospital that was built between 1683 and 1699 on land belonging to the municipality.

Inside it houses an Easter museum and has a plaque commemorating the visit of Isabel II.

This old church from the end of the 16th century can be found in the Plaza de la Constitución, at the end of Larios street. Nearby is the Carmen Thyssen Museum in the Villalón Palace (16th century) and the San Telmo School (1607), all located in Calle de la Compañía. 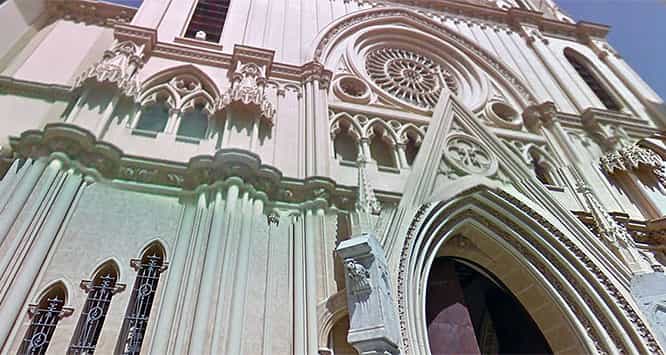 Continuing along Calle Compañía and starting from Plaza de la Constitución you will find the Church of the Sacred Heart on the right and after passing the museum.

It is a neo-Gothic building from the beginning of the 20th century (1920), you will find it to the west of Calle Compañía.

16th century church located in one of the oldest streets of Málaga, Calle Granada. This church was built on top of an old mosque with the idea of eradicating all possible traces of previous religion.

It was in this church that Picasso was baptized in 1881.

In Elizabethan Gothic style this church is located in front of the Cathedral of Malaga. Its construction began in the fifteenth century but ended in ruins and had to be rebuilt in the eighteenth century.

This church has been an Asset of Cultural Interest since 1931.

The above list focuses on some of the tourist attractions you will find in the city centre, but there are many more. Continue browsing our website to discover a little more about what you can do in Malaga: