The origins of the University of Malaga go back to the decade of the Sixties, with an evident necessity of the malagueña society that, through their citizens, authorities and mass media, demanded the birth of a university.

The foundations for the creation of this superior institution were already in place because Malaga counted by this time with the School of Engineers, the Normal School, the Faculty of Economics -dependant of the University of Granada -, and the Seminary, where philosophical and theological matters were taught.

In these first years the main location, of the university was the campus of the Ejido, although it continued counting on faculties in the city centre or in different quarters, like the Medicine Faculty which was first in being located at the new campus of Teatinos, the future seat of the university.

The faculties are changing location little by little. Thus is the case of the one of Philosophy and Letters, which was at first in two buildings downtown, until 1985 when it moved permanently to the campus of Teatinos, the Faculty of Sciences, initially located in the old University School, and later located also in the campus of Teatinos, as well as other centres that have now moved. However, some buildings are still located in different points around the city, as well as in the campus of the Ejido.

With little more than 25 years of life, the University of Malaga has turned not only into a great cultural revitalizing factor of the city, but also into a considerable support of the technological and investigative future. The University of Malaga constitutes one of the vertexes of the so-called "productive triangle" of the city, formed in addition by the airport and the Technological Park of Andalusia. The last one is joined already to the university institution across a continuous flow of ideas, professionals of high qualification and advanced technologies.

The policy of infrastructure of the University of Malaga has as its final target to unite in Teatinos's campus all the centres and university services. In the next years the construction of new centres, as well as the unfolding of the buildings that receive more than one faculty, they will be forming the future university city, which will occupy as a whole a surface near to two million square meters.

The new deanship is located in the old Post office building located in downtown Malaga. In this enclosure the services of the General Secretariat and Management are included. In addition, the building exhibits to the public some the archaeological remains of the wall of the Port of the capital, discovered in the subsoil. On the other hand, the Technological Park of Andalusia (PTA) also comprises part of the future expansion of the University. As such it demonstrates the next construction of the buildings that will lodge the centre of creation of companies, the cabinet of initiatives by the use and the university incubadora of companies. Next to this one, already the existing building of University Institutes will conform the presence of the University of Malaga in the PTA. 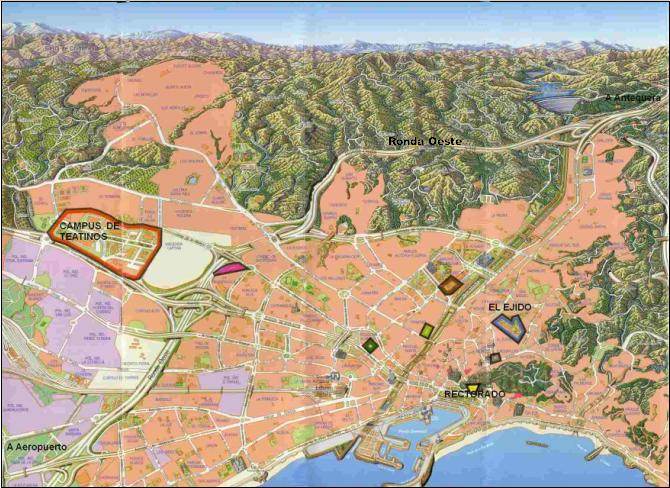 Teatinos is the new location where all the university faculties and schools are located. Little by little, it has become the university city, the formation centre par excellence. 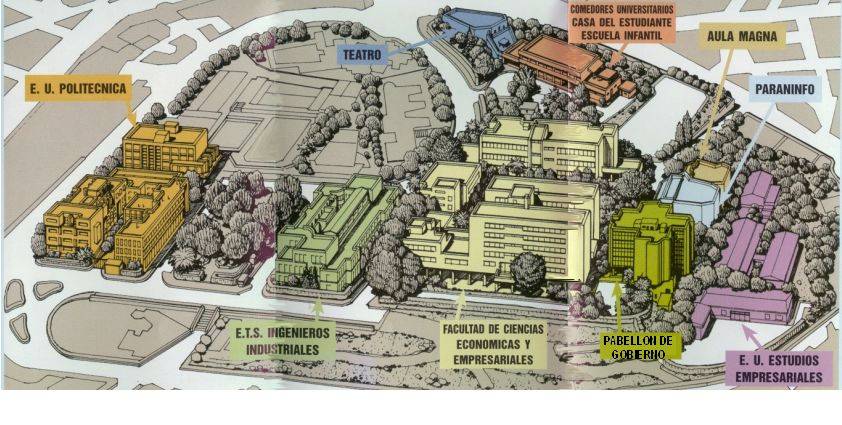 The Ejido is the old seat where all the faculties were located. Some faculties are still situated there, a place filled with tradition and university history.