Cartama is a municipality in the province of Malaga that borders with Almogia, Alora, Pizarra, Coin, Alhaurin el Grande, Alhaurin de la Torre and Malaga. This municipality has up to 11 population cores, with Cartama village and Estacion de Cartama as the main ones.

The economy of this municipality is mainly based on citric fruits and the meat industry.

This village dates back to Phoenician times, although these came across aboriginal tribes when they arrived at this area situated at the foot of a mountain. Over the passage of time, the Phoenicians and aboriginals gradually united and created the birth of Cartha (which means hidden place). 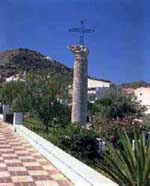 In roman times, the city known as Cartima expanded becoming one of the most important towns in the province of Malaga; and from this period, a great amount of archaeological remains are well preserved today.

After the loss of strength of the roman empire and its gradual downfall, Cartama passed on to the hands of the Visigoth barbarians and then on to the Muslims, who reconstructed the castle as well as the walls, turning Cartama into one of the best protected cities of Al-Andalus, of which the ruins of such admirable defence can still be witnessed today. It was in this period when they assigned the Muslim name of Cartama.

In the end, in 1485, Cartama was conquered by the Christian troops that had expanded from the north of the peninsula all over Andalusia.

The region’s religious fervour began after the conquest in 1485 with the development of buildings like the Virgin of los Remedios chapel, whose festivity is held on the 22nd of April, where they transport a religious figure on their shoulders from the chapel to the church of Saint Apostle.

The cattle fair, the 23nd and 24th of September is still one of the few markets of this kind that are preserved in a Spanish town.

How to get there and the transport

Cartama is situated only 25 kilometres away from Malaga airport and can be reached in less than 30 minutes by car. If you’re travelling from the airport to Cartama, you may be interested in checking out our prices to hire a car at Malaga airport, as we offer discount codes all year round so you always get the best price.

You can see the route that we recommend to get from Malaga to Cartama on the map below: