Archez is a municipality in Malaga province, situated at the foot of the great mountain range of Tejeda and Almijara, and is part of the Axarquia villages. The main economic activity in Archez is the agriculture.

Archez, as many of the villages in Andalusia, has its origin in its Moorish past and was probably a farmstead, which explains the narrowness of its streets.

All the villages in the Axarquia area based their economy on the agriculture and the vineyards, just how it is nowadays. The structure of its streets and its whitewashed houses are the identity symbols of its past.

In 1487 the Christian troops achieved the conquest of Archez, and just how they did in other conquered municipalities, they repopulated the area with people from the north and with converted Moors, although they gave the worst lands to the Moors, mostly on the edges of the mountainsides, and in spite of this, the resigned Moors cultivated the lands they were assigned.

In 1567 a law was decreed that forbade the Moors to carry weapons, to speak or write in their language in public nor in private, to use Moorish clothing and practice their customs or traditions, they were obliged to have Christian names and to keep their houses open during the whole day, as well as learning Spanish in a maximum period of 3 years. This ended up causing a rebellion in only one year that it rapidly extended all around Malaga and Granada as, according to what we can read nowadays from back then, the Moors preferred to die than to live without their freedom.

Finally, an army managed to put an end to this rebellion, although there was a great amount of lives lost from both sides. In 1609, an increasing Christian fanaticism dreaded that the Moors that were left would endanger the country’s religious unit, so they decreed the expulsion of all of them. 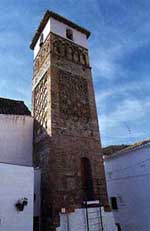 In Archez you may visit some of its most popular tourist attractions:

Located on the east side of Malaga province, there is a 65 km journey between Malaga airport and Archez (1 hour moreless). Find the cheapest car hire at Malaga airport deals and see how to get from Malaga airport to Archez.