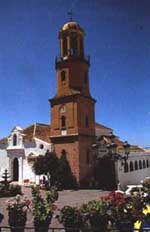 There is no record of Competa’s origin, although by its name it probably dates back to roman times, as the word 'Compita-orum' which means “crossroads”, may have evolved into 'Competa'. Due to its situation, this place must have been both a stopover point as well as a trading centre from the coast towards the inland since prehistoric times, although the history of the village itself as a population core commenced with the Arabs and then was later on occupied by the Christian armies.

In May 1487, Competa, which was already a consolidated village with about 600 inhabitants, decided to give in to the pressure of the Christian armies and surrender, hoping to maintain this way some kind of benefit for the Arabs that would stay and become Christians. Although this seemed to work at the beginning, the increasing demand of the Christians towards the Moors began to create so much tension that it ended up in a revolt throughout all of the occupied territories, including this municipality. During the second half of the 16th century, the rebellion leaded in the municipality by Martin Alguacil and Fernando El Darra managed to take control of the area, they repelled the first attempts of a Reconquista by the troops sent from Velez-Malaga, although they were finally defeated with the arrival of armies from all over Andalusia, after which all the lands belonging to the Moors were expropriated and given to Christians that came from other parts of Andalusia and the Moors were expelled from the region.

During the 20th century, Competa turned into a tourist destination, developing the village around the tourism and with a consolidated influx of visitors every year.

What to do and see in Competa 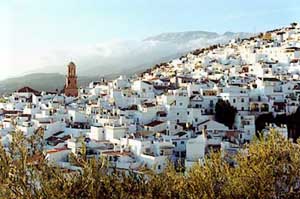 The contrast between the typical white houses of Competa and the green background of the mountains and nature that surround this village is well worth a visit. Competa also offers the visitor the possibility of going trekking on a 5 or 6 hour route around the mountain that ends in a village of Granada called Jatar.

The Christian conquest brought the construction of religious buildings like the Asuncion parish church, erected in 1505, that although it was destroyed by an earthquake it was later on rebuilt. There are also several chapels built all around the municipality, like the chapels of San Anton or San Sebastian.

Natural Park of Sierra Tejeda, Almijara and Alhama
From Competa there are 9 routes that you can choose from to enjoy the beautiful scenery while you are out trekking.

Hadriano Windmill Museum
In this museum we’ll be able to observe a collection of old agricultural utensils, as well as buying one of the best olive oils in the region or the delicious wine of Competa. 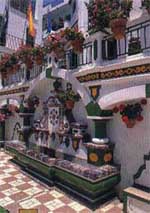 If what you're looking for are popular festivities and traditions, in Competa we’ll find many:

Wine Night:
On the 15th of August, Competa celebrates one of its biggest popular festivities, that were originally carried out as a goodbye party for the agricultures that would be leaving the next day to begin the harvest. The festive day itself originally came from one of the village’s locals called Fernandez Navas, who in 1973 invited everyone in the village to drink all the wine they could that night, thus creating an event that is repeated year after year.

The wine festivity starts in the morning with the locals of Competa dressed up in the typical clothing, treading on the grapes while they taste the Competa wine. Throughout the event there’s music in the background and they offer the typical ‘migas’ (crumbs) that are served with salt cod and grape salad.

Religious festivities:
This village also hosts various religious festivities throughout the whole year. Traditionally, these festivities were invented to replace pagan celebrations previous to the Christian conquest and to convert a higher number of believers, and although the religious meaning no longer exists, they are still celebrated year after year.

How to get to Competa

Competa offers a bus line from Monday to Sunday. This 68-kilometre journey shouldn’t take more than an hour by car and we must be particularly careful with the last kilometres of the road. To get to Competa you must head to Velez-Malaga along the motorway and once we pass it, we must turn off towards Algarrobo and Sayalonga, from where we’ll reach Competa.

You can see the route that we have selected to get to Competa from Malaga airport. If you don’t have your own vehicle, you may hire a car in Malaga with us.

Another option is a taxi transfer to Competa, check our prices here.