Gaucin is a municipality in the province of Malaga, situated in the Ronda mountain range, with a landscape of varied nature and its typical white houses, characteristic of the inland villages in Andalusia. This village, that had a great defensive value in the past, hosts a layout of Moorish streets with beautiful white houses with barred windows and balconies all along the mountainside, not only boasting the most typical beauty in Andalusia, but also its cultural heritage over the centuries. 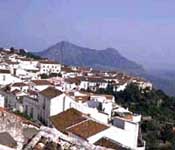 Gaucin, as a population core, was originally Roman, as proved by the remains of towns that have been found, although they most likely settled upon an existing Iberian village. The presence of the romans in Gaucin was quite useful for the communication between Gibraltar and Ronda, making use of the riverbeds.

Quite a few archaeological and architectural Arab remains are still preserved, and it was the Arabs who named the place Sajra Guazan (strong rock), due to its strategic location in the area. They also built a castle that defended the area, and in fact, according to Christian writings, it was one of the hardest to invade back then, and where Alfonso Perez de Guzman lost his life in 1039, also known as Guzman el Bueno.

Gaucin was conquered in 1457 and became a Christian-Feudal village, where the Muslims that wanted to become Christians remained, keeping their lands and their rights, although due to the increasing harshness of the Christians towards the Moors, these began to feel more and more excluded until they inevitably rebelled, covering all of the occupied territories. Later on, those Moors that didn’t move out of the peninsula towards the north of Africa were assassinated or enslaved in name of the Christian religion.

During the French invasion, the Napoleonic troops killed all the inhabitants in the village that they would come across and burnt all the archives; these inhabitants offered great resistance using guerrillas to fight back and was the birth of the Andalusian bandit of which so many legends and stories have reached our days.

In the late 19th and 20th century, Gaucin enjoyed a long period of prosperity due to its location between Estepona, Algeciras and the Ronda mountain range, benefiting from the several commercial transactions between the different areas.


What to do and see in Gaucin

If you visit Gaucin, you mustn’t miss out on the following monuments:

This place offers some fantastic views of the whole Ronda mountain range region and the Gibraltar region. In this area they have found Iberian ceramics from before the Phoenicians, the romans were the first to build a castle that was later on occupied by the Visigoths and subsequently reconstructed by the Arabs. The castle opens from 10:30 am to 1:30 pm in the mornings and from 6 pm to 8 pm in the evenings. Closed on Mondays and Tuesdays.

A baroque fountain constructed in 1628, located in the central square of the village.

Built in the early 18th century and abandoned in 1835, it’s currently used by the town hall to host events and activities.

Built in 1487 upon the original mosque that was there before, and this mosque was also built upon a Visigoth church.

We are going to highlight the most characteristic popular festivities in Gaucin:

- The Gaucin fair: Celebrated between the 4th and the 7th of August, and it’s a trace of a cattle fair in the olden days; it has fun rides for the kids, restaurants, dances and shows of local bands.

- Fiesta del toro de cuerda (the rope bull festivity): A celebration where they let two bulls that are tied up with ropes run around the streets while the local participants run in front of them.

- San Juan night: Organised every year on the 23rd of June with a pilgrimage and countryside celebration on the outskirts of the village with an orchestra, a bar, horseracing and motorbike racing.

- Carnival: The carnival in Gaucin is a street party with people in costumes dancing till the early morning around the central square.

In Gaucin they also celebrate other typical festivities like the Semana Santa (the Holy Week) for example, or the New Year’s Eve party, as well as other religious celebrations that have traditionally endured over the years.


How to get to Gaucin

You have to head towards Manilva and from there follow the directions to Gaucin. It’s a journey of 117 km from Malaga airport so we do recommend going by car. If you don’t have a vehicle of your own you can hire a car in Malaga We also offer as extra equipment a GPS to make the routes easier for you, although the journey to Gaucin in not hard at all, if you follow the Mediterranean motorway, you’ll get there in approximately an hour and a half driving.

Another option is to check for a transfer from Malaga to Gaucin.

You can see the route by car to Gaucin from Malaga on the map below: