In Campillos we’ll find the great wetlands of Malaga province, and very nearby is the village of Fuente de Piedra and its famous lagoon. The Campillos area hosts a wide biodiversity and most of its lagoons have been declared Natural Reserve.

Campillos has a Muslim origin, although during the Moorish Kingdom it belonged to Tebas. The town was founded in 1492 with the arrival of people from the surrounding villages and from the north due to the necessary repopulation after having conquered Tebas, taking it away from the Arabs, although the autonomy of Campillos wasn’t achieved until 1680.

They have found remains that make us believe that this was a place of passage during the prehistoric period, and that was later on occupied by Phoenicians and Romans; amongst these remains it’s worth mentioning the discovery of coins and fragments of ceramics, which is why it can be assumed that both civilisations settled in this area. They also found three Visigoth capitals upon which they later on built the San Jose school.

There are many things worth mentioning about Campillos but it’s certainly worth highlighting its natural surroundings and its archaeological sites. This area hosts one of the most beautiful natural environments in the province of Malaga. There’s up to 8 lagoons that are part of the Natural Reserve.

Amongst the archaeological remains of the history of Campillos we’ll find: 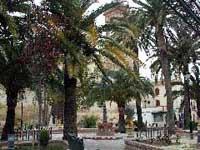 With the arrival of the Christian armies, the construction of religious buildings expanded with the aim of converting the non-believers of the dominant religion, and amongst those buildings we must highlight the parish church built in 1506 and the Saint Benito chapel built in the 16th century.


How to get to Campillos

We recommend to head towards Antequera as Campillos is not far away from there. If you need a vehicle you can hire a car in Malaga with us. We also offer car hire with GPS at a great price.

On the map below you can see one of the routes by car that you can take to get to Campillos from Malaga:

back to: malaga airport car rental