This city, of Celtic origin, is situated on a cliff of around 120 metres of depth, in the province of Malaga, 60 km. away from Marbella by car. A visit to Ronda is an unforgettable experience that will show us unforgettable landscapes and has a great and ancient cultural patrimony with a wide variety of monuments.

Ronda has prehistoric remains amongst which we can highlight the paintings in the Pileta Cave, discovered in 1905 by a farmer with paintings which are about 20.000 years old.

The origins of Ronda as a population nucleus are Celtic, who knew it as Arunda during the 6th century before our era. Later on the Phoenicians founded a hamlet nearby known as Acinipo, of which there are still remains preserved today, like its theatre and amphitheatre, and which was abandoned back in ancient times. 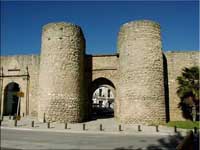 Arunda (Ronda) was conquered by the Greeks, who named it Runda, although its population did not considerably grow until the conquest by the Romans during the Second Punic War, when after the construction of the Lauros castle, it favoured the population settlement in its surroundings, and from then onwards the settlers of Ronda and Acinipo were known as roman citizens.

As from the 5th century, after the fall of the Roman Empire, Acinipo was abandoned and Ronda was invaded by the Visigoths who dominated the area until the year 711 when the Muslims invaded the peninsula to occupy Ronda in the year 713.

During this period of Muslim dominion was when the vast majority of Ronda’s monumental patrimony was created. This cultural growth ended on the 22nd of May 1485, when the Christian armies managed to conquer it after a long siege. As from this moment, the Christians began to modify the Muslim patrimony to adapt it to their beliefs and the city began to expand in districts, and Ronda’s old Arab nucleus was known as “The City”. 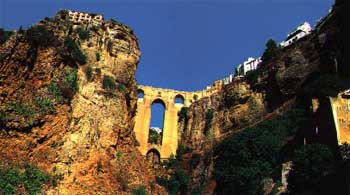 During the Christian presence they constructed important buildings like the ‘Puente Nuevo’ (New Bridge) to replace the one that collapsed in 1740 (symbol of the city, built between 1759 and 1793), the Cavalry’s Royal Armoury (1572), used for defence training, and the bullring.

As from the French invasion was when the first bandits began to appear in Ronda and its mountain range, who originated at first as guerrillas against the occupation and ended up assaulting along the roads and smuggling.

Some writers used these bandits as inspiration for their novels, creating a romantic image of the city of Ronda.

One of the main tourist attractions in Ronda is the ‘Puente Nuevo’ (New Bridge), by the ‘Puente Viejo’ (Old Bridge) and the ‘Puente Arabe’ (Arab Bridge).

This city was divided into three districts:

- San Francisco: The oldest area and where the Arab citadel was located.

- La Ciudad (The City): Is where we’ll find the large buildings and religious edifications like convents and churches. It has very picturesque streets of Arab origins.

- El Mercadillo (The Street Market): It’s the most modern neighbourhood and was founded as from the Christian armies’ conquest.

In Ronda we can visit several museums:

- Lara Museum: An art and antiques museum situated in an 18th century building with clocks, weapons, archaeology and musical instruments.

- Rilke Museum: A permanent exhibition in the room 208 of the Queen Victoria hotel with vintage details.

- The Bandit Museum: Its history through documents, photographs and personal information of some of the most famous bandits such as ’Pasos Largos’, ‘El Tempranillo’, ‘Tragabuches’ and many others that used to assault on the roads back in the day. It also has a recreation of a vintage tavern.

- Ronda’s Wine Museum: A permanent exhibition of the wine’s history in Ronda and its elaboration.

If we visit Ronda we can enjoy its gastronomy with simple dishes like the tomato and garlic soup, chickpea stew/soup or lentil stew/soup. We can also request more elaborated dishes derived from hunting (‘Tajo’-style partridge or Ronda-style rabbit).

The wines in Ronda have the ‘Sierras de Malaga’ guarantee of origin.

One of the main access roads to Ronda is the one that connects Marbella with Ronda, it’s the easiest route although you can also get to Ronda from Malaga and enjoy the interior rural roads. If you wish to hire a car in Malaga, feel free to check out our prices and ask us for a GPS if you need it.

From the train station in Ronda there are trains that go to Algeciras, Malaga, Antequera, Granada, Cordoba and Madrid.

The two main bus lines that go to Ronda are:

On the map below you can see the route of the road from Malaga airport to Ronda: