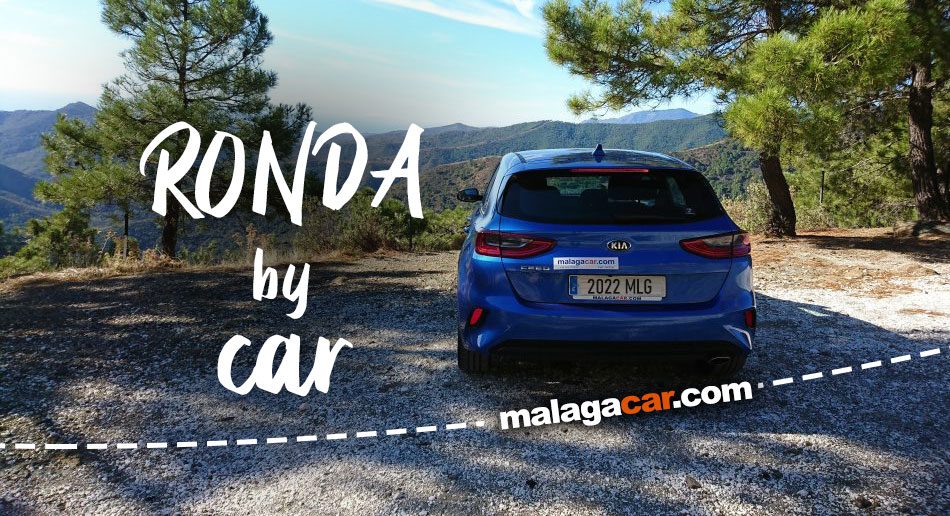 From the Costa del Sol we can choose between several options of car routes to get to Ronda. It depends on our desire to drive through the beautiful landscapes of the interior of the province of Malaga and the time we have available.

From Malaga to Ronda

In out way to Ronda from Malaga we will get to Alhaurín de la Torre, situated a few kilometres from the coast of Torremolinos. We can make a stop on the way and visit the Oriental Garden Bienquerido.

It also has a children’s playground and next to it a cafeteria with a games room. Given that it is relatively small, it can be visited in half an hour.

This park with Japanese aesthetics and lush planting is open every day from 10 am to 8.30 pm.

From Alhaurín de la Torre we start to flank the northern slopes of Sierra de Mijas until we reach Alhaurín el Grande and continue along the road towards Coín.

Coín stands out for being a green jewel of crops and orchards and for being a centre of ecological agriculture.

Next to the road there is an Agroalimentary Market of Coín (and with easy parking) you can stock up with the best of the region, 0-kilometre fruit and vegetables, delicious juices prepared on the spot, cheeses of various types, sausages and even pottery. Open on Sundays from 9 to 2:30 pm.

On our route along the A-366 we pass close by the San Isidro Chapel in the municipality of Guaro. It is located on the banks of the Río Grande (where we can take a refreshing dip), and where the traditional pilgrimage in honour of San Isidro Labrador, patron saint of farmers, is held every year on 15 May.

The pretty village of Guaro is also well known for its popular Luna Mora Festival. In September, during one weekend the streets of the village are illuminated from dusk with the unique light of more than 20.000 candles, in homage to the different cultures that lived there in the past.

There is a large medieval souk, cultural activities, workshops, a huge gastronomic offer and concerts.

Once past Guaro, we enter the recently declared first national park in Malaga, the Sierra de las Nieves National Park. In Yunquera we can visit the Río Grande source, one of the few rivers in the province with an abundant flow of water all year round.

The route starts at the Los Arbolitos recreational area, located next to the Sierra de las Nieves forest track. The access road by car is cut off by a chain approximately 1 km from the cave.

We continue our route through the Sierra de las Nieves where water abounds as you will discover. Near El Burgo we can visit the río Turrón dam, a spectacular natural spot with crystal clear waters and where you will certainly want to take a dip if the heat gets too much, but it is also beautiful in autumn.

We continue our route along the A-366 and still in the municipality of El Burgo we can enjoy wonderful views at our next stop, the Mirador del Guarda Forestal, an essential place to stop and contemplate the beautiful views of Sierra de las Nieves in any season of the year.

From Marbella to Ronda

From Marbella we have two options to get to Ronda.

One is from the centre of Marbella, passing through the La Cañada shopping centre and into Sierra Blanca on the A-355.

A few kilometres further on, near Ojén, if you have time it is worth taking a detour to enjoy the wonderful views of Marbella, the Costa del Sol and even the African coast on clear days, from the Mirador de Juanar viewpoint. It is a short, low-difficulty route, also suitable for older people.

A few kilometres north of Ojén is the Ecoreserva Ojén, a must if you are a nature lover. You can see wild boar, deer and mouflons living in the wild.

We continue along the A-355 to Coín, where we continue with the explanation above to get there from Málaga.

The second way to get to Ronda from Marbella is to take the A-397 at San Pedro de Alcántara.

This is our route of choice if we want to get into the magic of the centuries-old chestnut forests, very popular and known as Bosques de Cobre (Copperwoods) for their spectacular beauty during autumn. The Serranía de Ronda is dotted with charming white villages, each of which is worth a visit.

The higher we get, the more spectacular the views become.

On our route to Ronda there are several viewpoints where you can stop, such as the Igualeja viewpoint, from which you can see the entire Genal Valley, including Africa and Gibraltar on a clear day.

On the other side of the road is the Conejeras Recreational Area, which has tables, seats and barbecues in a beautiful natural setting for a picnic.

If the heat is on and you like a route through Sierra de las Nieves, we can recommend you to go to the Charco y Cascada Malillo next to the Guadalevín River, a pool of clean and fresh water, ideal for cooling off. The route of about 5 km starts from the Área Recreativa Conejeras.

And now we are approaching Ronda from the south. We leave the rugged mountains of the Sierra behind us and enter a high plateau more than 700 metres above sea level.

What to see in Ronda

Ronda has without doubt an impressive historical and monumental heritage, with the passage of the Roman, Visigoth and Muslim cultures, each leaving their mark. Among the essential visits we can mention the following: 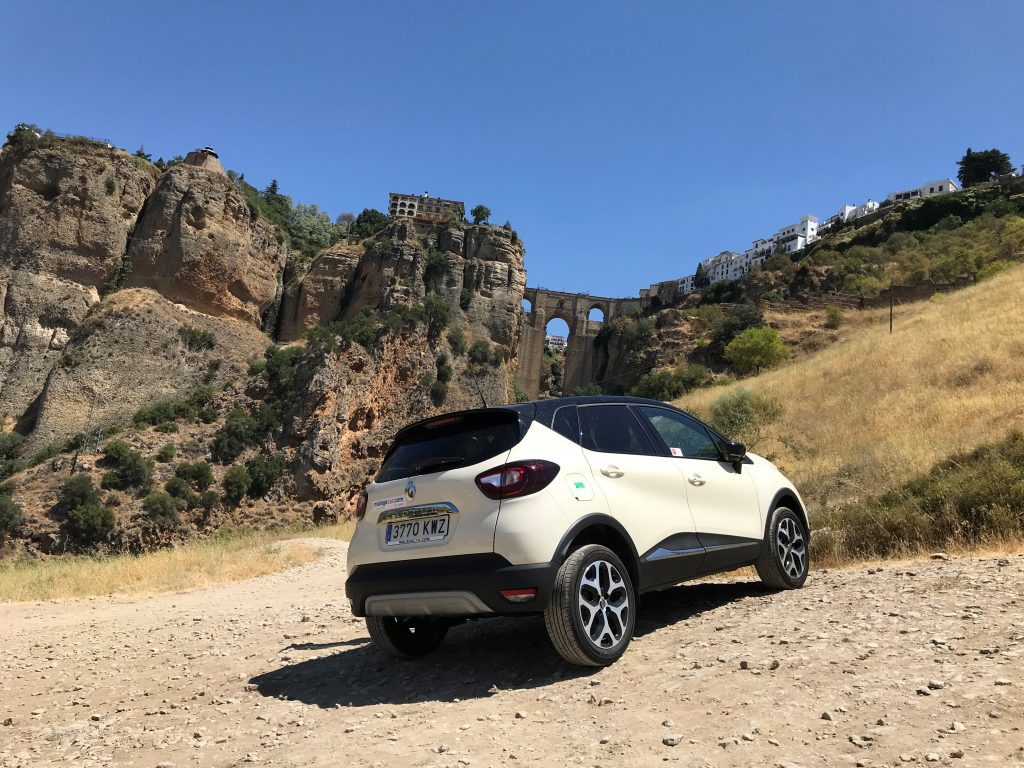 The Tajo or New Bridge, about 100 metres above the Guadalevín river, is the symbol of Ronda par excellence.

Also nearby is the Puente Viejo (Old Bridge) from the Moorish period, just a few metres from the city’s famous Arab Baths.

The Arab Baths are a thermal enclosure from the Muslim period, considered the best preserved in Spain.

The Palace of Mondragon is of Arab origin, built in the 14th century and was later used as the residence of the Catholic kings Isabella and Ferdinand.

The Plaza de Toros is considered to be one of the oldest bullrings in Spain.

House of the Moorish King

The Casa del Rey Moro is a historic palace with a water mine and hanging gardens that visitors can explore, with 100 metres of stairs leading down to the river with incredible views.

The Casa-Palacio del Gigante is a preserved house from the Nasrid dynasty, with elements typical of Islamic architecture and a central courtyard.

A former convent now used as a conference and exhibition centre.

A 20th century Art Nouveau mansion with a beautiful courtyard decorated with Nasrid tiles and wonderful views from its garden.

This street is one of the liveliest in Ronda with a wide range of gastronomic offer.

One of the most important streets in the historic centre, with bars, traditional shops and several historic buildings.

The walls of Ronda date back to the Nasrid period and are in a very good state of preservation.

Ronda also has a large number of museums.

The Municipal Museum located in the Palace of Mondragón exhibits remains from excavations and donations from private collections.

The Museo Lara is a museum of art and antiquities housed in an old 18th century building.

The Bandolero Museum pays homage to the bandits of Serranía de Ronda through a collection of documents, photographs, personal data and events from the life of the most famous bandits of those times.

Ronda is also famous for its excellent vineyards. In this museum you can learn more about the history of wine in the region. If you are a wine lover, you can combine your visit to Ronda with wine tourism in Malaga and discover some of its best wineries.

Ronda Romántica is a festival held in May, in which historical events are staged in the streets of the city. Villages from all over the Serranía de Ronda take part in classic costumes from the time of the Bandoleros.

For a whole weekend there are parades, historical re-enactments, choirs and dances, a medieval market and, of course, good food.

Interactive Map from Malaga to Ronda

Finally, you can see in the map below the main points of interest we have written about in the article. Ronda is a fantastic place to visit by car and you will not just enjoy the destination, but the road route for getting there. Granada, the enchanted city, from Malaga The most beautiful White Villages of the Alpujarra Granadina
Subscribe