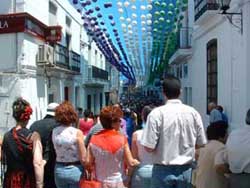 Alhaurin el Grande is a municipality in Malaga province situated to the north of the Mijas mountain range. If we visit this village we’ll find numerous cultivations of citruses, fruit trees and vegetable farms.

The name of Alhaurin came from the Arabs, and after the conquest of the Catholic Kings, these would add “el Grande” to differentiate it from the other Alhaurin in Malaga, "Alhaurin de la Torre".

Several cultures have passed through this place: Phoenicians, Romans, Visigoths and Arabs have settled in Alhaurin throughout history...although the human presence goes beyond, with Neolithic archaeological remains. 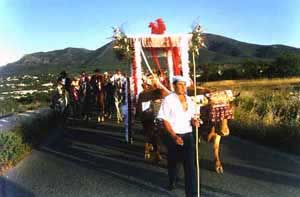 The Greek presence provided methods to cultivate the lands and prune vineyards, something that achieved an increase of the local population and the trade.

The romans created different settlements inside Alhaurin el Grande, amongst them we can highlight ‘Fuente del Sol’ and ‘la Huerta del Niño’ (where has been found a tombstone of a young roman)in these settlements have been found numerous archaeological remains, although the most important of all is the aqueduct on the Coin road. 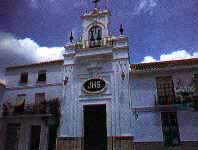 Amongst the benefits that the Arabs brought, we can highlight an increase of trade, agriculture and cattle farming in the area.

They created several buildings, like the mosque for example, that we could see if it weren’t for the Christian temple built after the conquest.

We’ll also find, amongst the most important remains, the well-known Castillo de la Reina (the Queen’s Castle), today almost completely disappeared, that was used by the Queen Isabel after the conquest.

Alhaurin el Grande was an important location during the Al-Andalus period, and was also the culture that named it "Alhaur", which means "the valley people".

The Christian conquest didn’t bring any improvements in particular for the place, but they did knock down a few buildings and mosques. Amongst the Christian contributions towards the history of Alhaurin is the adjective "El Grande" (the great) to differentiate it from the other recently conquered municipalities in Malaga.

The following phone numbers could be useful for you in case you are travelling to Alhaurin el Grande:

Transport and how to get to Alhaurin el Grande

There are several different bus lines that go to Alhaurin el Grande:

You can check more information about buses to and from Alhaurin el Grande in the following website: https://siu.ctmam.ctan.es/es/index.php

Due to the limited options available, a car rental in Malaga will be very useful to get to: In about 40 minutes (over 28 kilometres) you can get to Alhaurin el Grande from Malaga airport, following the detailed route on the map below: