The name of Arriate has Arabic origins, as well as the urban core of this village situated in the Ronda mountain range, 104 km away from Malaga and only 8 km away from Ronda.

Here they have found archaeological remains from ancient times, caves that reveal the existence of primitive residents and where the appearance of stone axes and prehistoric utensils is quite frequent.

During the Arab reign it was known as Arriadh, and was a small rural village where very few families lived and worked in the fields, which is why it wasn’t difficult for the Christian army to fully take control of the area during their Al-Andalus invasion. 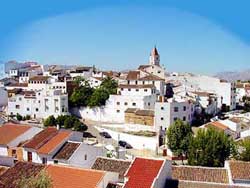 In 1661, Arriate’s inhabitants paid 352.739 maravedis to gain their independence from Ronda.

In Arriate there are several popular festivities throughout the year:

Amongst their customs and traditions we can highlight the craftsmanship with wood and metal.

In their gastronomy, the famous dishes are those elaborated by the locals like the ‘chorizo’ en manteca (Spanish spicy sausage in lard), the blood sausage (black pudding), rabbit in garlic and ‘salmorejo’, amongst other typical Andalusian dishes.

To get to Arriate you must take the road towards Ronda, once you’re there, Arriate is situated 8 Km. to the north. If you’re going by car, it shouldn’t take more than an hour and a half to get there. You can hire a car with us in Malaga at the best price and enjoy your visit to Arriate and other villages in the province of Malaga.

On the map below you can see the marked route to Arriate:
View Larger Map