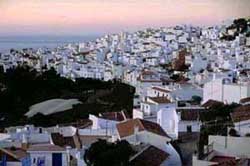 Torrox is a municipality in the province of Malaga, in the eastern part of the Costa del Sol. It’s a very popular place amongst the Germans and very touristy due to its beaches and touristic infrastructure during the summer months.

Torrox is a village prepared for tourism which is why you’ll be able to enjoy your holiday on the beach or inland, as it’s located on the foothill of the Almijara mountain range and near the coast.

Between the 4th and 8th century, the area of Torrox was occupied by the Visigoths who lost it to the Arab invasion during the 8th century, and the Mozarabs, the region’s original settlers that didn’t belong to the Muslim religion, were murdered or expelled after the rebellion they carried out due to their unhappiness and the extra taxes they had to pay.

Torrox was conquered by the Christian armies on the 29th of April 1487, as from then, after a Muslim rebellion that had extended all over the Axarquia and that was caused by a persecution that they constantly suffered, they began to escape and depopulate Torrox.

Torrox has a wide cultural legacy that we’ll be able to enjoy if we visit. There are plenty of religious Christian buildings that began to be constructed as from the conquest.

- Incarnation church, founded in the 15th century and built upon the old mosque.

- La Granja (The Farm) Aqueduct, which was used up till the 19th century.

- San Jose Hospital: Today in ruins and dates back to the 18th century. They are now constructing a residential building respecting the original architecture.

- Arab tower and the Inquisition House, both from the Arab period. - Roman ruins near the Torrox lighthouse that date back to the 1st century and were inhabited until the 8th century with the remains of a necropolis, thermal baths, ovens, etc.

- Customs and the Coin House from the 18th century.

Torrox also hosts a series of festivities and celebrations throughout the whole year:

-Torrox Fair: On the first weekend of October

-‘Migas’ Day: An event of national tourist interest. Held on the last Sunday before Christmas where they share out plates of ‘migas’, a very typical dish in Torrox.

-San Juan: This originally pagan festivity, adopted by the Christians, is celebrated in honour of the summer solstice and with the bonfire with which they intended to give more strength to the sun. Today, they celebrate by lighting bonfires on the beach and cooking food on barbeques.

Transport and how to get from Malaga to Torrox

There are different options to get to Torrox from Malaga, although the most comfortable way is by travelling in our own vehicle, which if we don’t have, we can choose to hire. If you decide to hire a car in Malaga, feel free to click on the link to check out our prices and choose the vehicle that best suits your needs.

In Torrox there is also a bus station where stops the Bus line M-363 to and from Malaga.