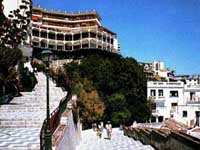 Torremolinos is a municipality in the province of Malaga that has witnessed an exponential growth since 1920 until today, from a small fishing district in its origins to one of the main tourist destinations in Europe.

Torremolinos is situated at the foothill of the Mijas mountain range and covers right down to the coast, with a geographical feature, today surrounded by the seafront promenade, which divides Torremolinos into 2 of its oldest districts: La Carihuela and El Bajondillo. 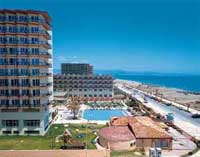 Torremolinos can be considered one of the most cosmopolitan municipalities in Andalusia, where people from all over the world coexist all year round and there are also shops where is spoken only English or Dutch.

There is evidence of human presence in the Torremolinos area that dates back to 5.000 years before our era. There have been found human skulls and archaeological remains like vessels, arrowheads, a ring and several decorations, to be precise in the Treasure Cave, Cave of Charm, Point of Torremolinos, Cave of the Badgers and Covered Cave.

During the period of the first remains found, the men learnt how to cultivate the fields, they made use of the cattle farming and fabricated both ceramics and hunting tools but they were yet to discover the metal. In the Carihuela area where the seafront promenade joins it with El Bajondillo they found human remains that prove a settlement. 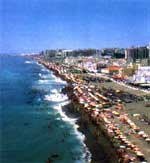 The Phoenicians founded the city of Saduce near Torremolinos, although it was the Romans who created a population nucleus around what we know today as Torremolinos, building a road that linked Cadiz with Malaga passing through Torremolinos. All along this road they built villages and fish-salting factories, of some of them there are still remains today.

The Arabs, after invading the south of Spain, built the Defence Tower that we can find at the end of the famous San Miguel street in Torremolinos, the tower is known as “Tower of the Mills”, which is 12 metres high.

After the conquest by the Christian armies, they had to build the Santa Clara castle and a line of defensive canons in 1763 in the Montemar hills, where one can still witness the remains.

The poverty in Torremolinos caused a unity with the capital in the early 20th century, the industry of the mills had disappeared, and it had become a fishing district until approximately 1950, as from the sixties it became an important tourist destination, attracting all kinds of famous celebrities from back then (like Ava Gardner for example) and being the place where many movies have been filmed.

The tourism boom of the sixties even achieved to open the first gay bar in Spain in the middle of the politic dictatorship, who were permissive up to a certain point, carrying out periodic raids.

Torremolinos went back to being an independent municipality in the province of Malaga on the 27th of September 1988.

To know more visit our section about the history of Torremolinos.

San Miguel Street, situated in Torremolinos’ old quarter, is a must-visit place for every tourist. Along this street you’ll find plenty of shops and establishments to eat and drink, and it ends with a downhill that leads to the beach, passing by the old Tower of the Mills.

One of the most important attractions are the beaches in Torremolinos, with approximately 7 km of length; they’re packed with tourists during the summer months and it’s the ideal place to enjoy the well-known fried fish, a very typical dish in Torremolinos and in Malaga in general.

If you prefer nature, Torremolinos has several green areas like the botanical garden of Inca or the Battery Park, which was used back in the day as an anti-aircraft defence with bunkers and passageways.

Amongst Torremolinos attractions we’ll find the Aqualand water park and the Crocodile park, a zoo dedicated to reptiles.

To know more about public transport in Torremolinos, just visit the link.

Torremolinos is very near Malaga airport, about 10 minutes away by car or taxi. If you need your own vehicle to discover Malaga during your holidays, feel free to check out our prices for car hire at Malaga airport, or if you prefer, you can book a Malaga airport transfer to Torremolinos.

On the map below you can see the chosen route by car from Malaga airport to Torremolinos: