If you come to Torremolinos you can visit a few of its most characteristic monuments, amongst them we must highlight:

San Miguel chapel:
With a religious origin, it's where they celebrate the San Miguel festivities.

El Bajondillo Seafront Promenade
It's the seafront promenade of the Bajondillo district that extends along one kilometre with plenty of 'chiringuitos' (beach bars) to sit down and have something to eat or drink.

La Carihuela Seafront Promenade
It extends up to the Plaza del Remo, and has 'chiringuitos' and restaurants where one can enjoy the fried fish and seafood, ice cream parlours and souvenir shops.

Pablo Ruiz Picasso Cultural Centre
It's situated in the interior of an early 19th century building in La Cruz Street, formerly known as College of Orphans of the Railwaymen. It reopened in 2001 and the original construction is of around 1929.

Torremolinos Fairground
If you go to the fair, you'll visit this area. The fairground also hosts the Sports City and the Municipal Auditorium. Every Thursday and Sunday a flea market is held there, with plenty of second hand items.

Fountain of the King
One of the most important spring fountains in Andalusia, situated in the upper part of Torremolinos, El Pinar de los Manantiales, near the Mill of Inca.

Conference and Exhibition Centre
A big building where all kinds of events and exhibitions are held, from technological innovations to gastronomic festivities.

Tower of the Mills
The symbol of Torremolinos, erected in the early 19th century to protect the coast by the Arabs and by the Christians after the conquest.

House of the Navajas
Moorish style palace with sea views situated in the Playamar area. Ordered to be built by Antonio Navajas Ruiz in 1925. It's now part of the patrimony of Torremolinos. 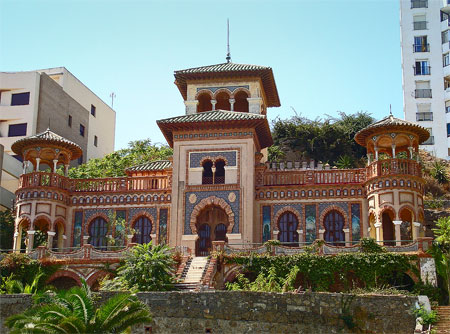 Tattoo Museum:
A peculiar museum of the art of tattooing the skin...it may not be considered cultural, but the visitor will certainly find it interesting.

San Miguel Street
A pedestrian and commercial street, situated in the centre of Torremolinos, it's the central axis of the municipality. It has all kinds of shops, from jewellery stores to shoe shops, fashion and from its ramifications there is access to restaurants and bars. The Torremolinos train station is also situated next to the San Miguel street.

Pinares of Torremolinos
A green area in the municipality with beautiful spring fountains and many different species of trees. There are barbecues and tables for those who want to spend a day in the countryside.

Torremolinos beaches
One of the main tourist attractions in this municipality are the beaches, with over 7 km. of beaches and a long seafront promenade, showers and the possibility of practicing many water sports. The most popular beaches are: El Saltillo, Montemar, La Carihuela, El Bajondillo, Playamar and Los Alamos.