This municipality in the province of Malaga is situated in the Malaga Mountains, opposite an old great cereal cultivation, known as the granary of Malaga during the Muslim period.

Casabermeja has a long history and natural areas like the Montes de Malaga Natural Park.

According to the archaeological remains found, there were inhabitants in the Casabermeja area since the copper age from when they have found cave paintings, but the first stable population settlement occurred during the roman period with the existence of a small village of which they found remains of a water supply system.

The Arabs arrived and reigned in the area until they abandoned it; the Christians from the north repopulated the municipality after the conquest of Malaga in 1482.

The name came from the Arabs, possibly from the first to arrive because they named the settlement Casr Bermeja (reddish castle) and in the badge of the city one can see a red castle as the main element.

What to see and do in Casabermeja 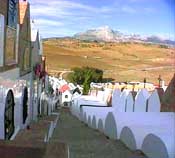 Casabermeja has a long history that has given it a great cultural and architectural variety that we can enjoy, and here are a few recommendations to visit:

Zambra Tower:
Built by the Arabs in the 13th century and used as a watchtower. We can reach it if we follow the old Montes road towards the chapel, at 1.5 km away from Casabermeja, we continue up the road until the Country Inn called ‘Patas Cortas’ (short legs), 4.2 km away from Casabermeja, and from that point we have to head down until the route that will take us to Zambra Tower.

Casabermeja cemetery
Built in the 18th century and declared as a Historical-Artistic monument. It’s a small 'city' inside the village. This cemetery is the first thing that we can see from the motorway and it’s the village’s main tourist attraction, where tourists wonder around it’s small streets observing white pantheons that look like little houses.

The Christian presence began with the imposition of their religion creating religious buildings like the church that dates back to the 16th century and the chapel built later on. The church suffered several additions during the 18th and 19th century and a restoration. The church tower can be seen from any point of the village.

In Casabermeja, apart from the historical visits, there are also some interesting and beautiful routes for either trekking or cycling where not only will you be able to contemplate the village but also even the northern coast of Africa (on a clear day), the cave paintings, the Reservoir of the Hole and the Chapel.

The most typical food in Casabermeja is the 'dish of the montes', which we recommend and encourage you to try; this dish and so much more, like:

How to get to Casabermeja

This municipality is situated 33 Km. away from Malaga airport and will take around 30 minutes to get there. If you need a vehicle you can check out our prices for a car hire in Malaga.

On the map below, we have shown the recommended route to get to Casabermeja from Malaga airport.