Mijas is a municipality in the province of Malaga on the Costa del Sol next to Fuengirola. It’s a coastal municipality and the touristic activity is the main economic engine of this locality.

The majority of the area that covers Mijas is mountainous and has 2 urban cores, one increasing on the coast and the other on the hillside of the mountain range at about 428 metres above sea-level with a typical character of an Andalusian white village. 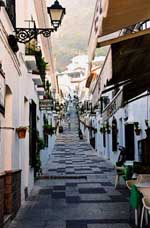 The Phoenicians and Greeks also passed through Mijas, attracted by the abundant mining in the area. When the Romans arrived, they named it Tamisa and the place was an important trade focus till the fall of the empire, which was when they entered the area of the Visigoths.

With the Muslims’ conquest of Malaga in the year 714, these allowed the inhabitants of Mijas to keep their goods and customs. As from then onwards, it was known as Mixa and its economic growth lasted until the Christian armies’ invasion in 1487, when they ended up surrendering and its population was sold as slaves. The houses and lands were reassigned to the Christians that were brought down from the north to repopulate the area.

Due to the high piracy activity in the area, as from 1492 they built the watchtowers which alerted the population to fight them. These towers still stand today, so they can be visited at any time.

During the history of Mijas, agriculture and fishing have been important for its development, as well as the mining and cattle exploitation to a lesser extent, although the reason why Mijas really improved was due to the arrival of tourism thanks to the Costa del Sol’s international fame. 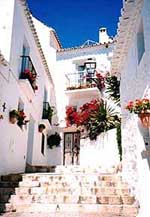 The municipality of Mijas offers a great number of tourist attractions that we can visit; throughout the year they also celebrate numerous festivals in the open air during the summer months.

Max’s Wagon: A collection of miniatures that includes a reduced human head.

The Watchtowers centre: Located in the ‘Torre Nueva’ (New Tower) in La Cala del Moral and exhibits the history of the towers and of Mijas.

The majority of monuments that can be visited in Mijas have a religious origin as from the influence of the Catholic Conquistadors:

- Santa Ana chapel: Dates back to the 18th century

- Inmaculada church: A church from the 17th century situated on the top party of the village, built upon an old mosque conserving its tower as a belfry.

- Gardens of the Wall: Gardens built upon the old fortress that surrounded the village of Mijas.

- Watchtowers: As previously mentioned, these towers were used to watch out for the safety of Mijas, defending it from possible pirate attacks. They are distributed all along the Costa del Sol’s coast.

Mijas is a privileged place of great beauty and top-quality beaches. If you like to enjoy the sun and the sea, in Mijas you’ll be able to enjoy several well-known beaches such as:

La Cala: Situated in La Cala de Mijas, where they occasionally organise and celebrate concerts and nocturnal festivals on weekends.

Calahonda: A good beach for fishing or snorkelling.

El Bombo: A Mijas beach situated next to a cliff, ideal for scuba diving.

El Chaparral: A rocky beack where there is normally quite a lot of swell.

El Faro: Ideal for spearfishing or with rods and hosts several little coves.

If we want to get to Mijas from any other place, we can use our own way of transport, a transfer or a bus, there is no train service to Mijas, although sometime in the future it is planned on its way to Marbella.

The bus lines in Mijas:

This way of transport appeared around 1950. The ‘burrotaxi’ is preserved today as a tourist attraction and they even have their own special donkey taxi rank.

From Malaga to Mijas

Mijas is situated approximately 22 kilometres away from Malaga airport and it takes about 20 minutes to get there if we travel in our own car. If you need a vehicle, you can check out our prices to hire a car in Malaga or a taxi transfer to Mijas,

On the map below you can see the route to get to Mijas from Malaga by car: