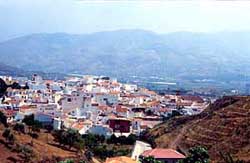 Benamocarra is a municipality in the province of Malaga in Andalusia. It’s situated in the Axarquia near Velez-Malaga and with beautiful views of the Tejeda, Almijara and Alhama mountain ranges, Malaga mountains and most of the Costa del Sol.

Benamocarra has Arabic origins and its name comes from Banu Mukarram “Sons of Mukarram”, most likely a Berber tribe. It was conquered at the same time as the rest of the surrounding villages in the Axarquia.

In 1568, with rebellion of the Moors, Benamocarra had 115 inhabitants in total, where 87 of them were Muslims and the rest were Christians brought down from the north to repopulate the newly conquered territories. The rebellion was caused by the fanaticism and the intransigence that the religion expanded all around the peninsula, majorly influenced by Cardinal Cisneros while he was alive.

After the expulsion of the Moors in 1572, many settlers from Puente Genil, Estepa, Antequera and other places came to Benamocarra, all Christians from the north of Spain.

Most of the villages in the Axarquia have similar characteristics in common when it comes to the gastronomy, so that the visitors that wish to try a typical dish in Benamocarra will find no inconvenience whatsoever.

When strolling through Benamocarra, the beauty of its streets will certainly captivate us, with great Moorish influence in their irregular alleys and houses adapted to the land with whitewashed walls.

Which are the most recommended places to visit?

Concha Collantes’ Windmill House:
Built in the late 18th century, this windmill had been working until 1964, still conserving its furnishings and tools from back then, making it a real museum.

San Isidro Labrador chapel:
Built by the inhabitants of Benamocarra, it was a place used in the past to celebrate religious rites.

Los Caños fountain:
The origin of this fountain was a natural wellspring where the Muslims carried out their rituals.

Mosaics:
Whilst we wonder around the whole village, we’ll find several mosaics situated on the facades and in other places of the village where the history and legends of the Benamocarra village are told.

Patio of Amalia:
A two-story house that in the past was a Nasrid headquarter and it had a mosque inside the house. Between the 19th and the 20th century it was a windmill.

How to get to Benamocarra from Malaga?

You must head towards Velez-Malaga first, then from there, head north and follow the signs to Benamocarra. The journey by car should take 45 minutes (50 kilometres from Malaga airport), if you don’t have a vehicle you can hire a car with us in Malaga. Check out our prices with no obligation.

Find below the road route from Malaga airport to Benamocarra:

back to: car rental malaga