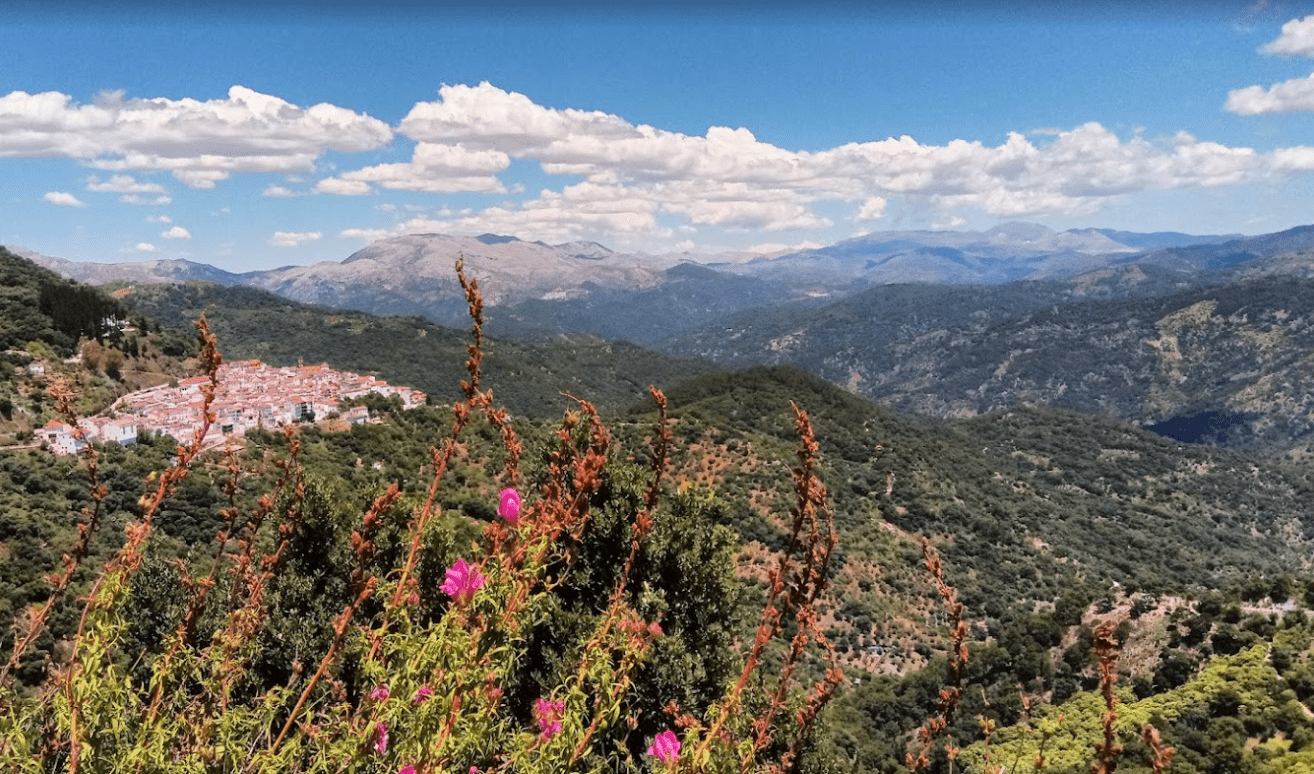 In the region of the Serranía de Ronda we find another jewel of the province of Málaga, the beautiful Genal Valley.

This spot is one of the few almost virgin places left in the province, hidden inland, reached after many winding bends along country roads, offering the visitor magnificent views of the crystal-clear waters of the river Genal and vast centuries-old forests.

This emerald-coloured jewel is home to a total of 16 white villages of Arab origin and has a special microclimate and abundant rainfall that has led to a wide variety of flora and a unique and singular landscape.

If you enjoy hiking, or simply want to discover this corner and its rich local gastronomy, we invite you to visit this natural paradise, its villages and its people.

Interactive map of the White Villages of the Genal Valley

Villages of the Upper Genal

Igualeja – Source of the river Genal

The river Genal rises in the village of Igualeja, a small white village dedicated to the cultivation of chestnuts, among which the Pilonga variety stands out, one of the best chestnuts on the international market.

A few metres from the village is situated the Cueva Excéntrica, a cave of great beauty due to its karstic formations: stalagmites, stalactites, fistulas and eccentrics, which give the cave its name. Due to its low difficulty, it is the ideal cave for beginners in the exciting sport of caving.

The via ferrata in Igualeja is much more difficult and not recommended for people who are not in good shape and you should have already practised a via ferrata before.

How to get there: https://goo.gl/maps/d31JTnyaXJVtk3sU9

Pujerra and its Chestnut groves

This small village of just over 300 inhabitants is situated almost 800 metres above sea level. To the south of Pujerra begins the so-called Bosque de Cobre (Copper Forest), a hiking area that passes through a large chestnut grove that is simply spectacular in autumn.

But no less impressive is the sight of hundreds of chestnut trees in bloom in spring, we share with you these stunning views from the Viewpoint Mirador del Castañar on Google Street View!

If you want even more impressive views over the landscape of the upper Genal, we recommend you climb to the top of the village to the Mirador de la Cruz.

A unique festival in Pujerra is the Tostón or Chestnut Fair, which coincides with the festivity of the Virgen de Fátima, patron saint of Pujerra. The villagers celebrate the end of the chestnut harvest at the end of October.

How to get there: https://goo.gl/maps/we38NBv9rNo9GLSK8

The village of Parauta is situated 800 metres above sea level and currently has about 240 inhabitants. The village centre reflects its historic Moorish past with narrow, steep cobbled streets.

Much of its territory lies within the Sierra de las Nieves National Park and is protected for its great environmental value, Parauta was named an Ecological Municipality in 1999.

At the entrance to the village there is a drinking fountain ideal for refreshment, the Fuente de la Alquieria.

Every year in November the locals celebrate Fiesta del Conejo (Rabbit Festival), with the tasting of rice with rabbit and traditional products.

How to get there: https://goo.gl/maps/f9UKtpuufvo27VC26

The village is situated at no less than 845 metres above sea level. It is the highest municipality in the whole region. Due to this considerable height, we can enjoy from the village breath-taking panoramic views; to the south the Genal Valley and to the north the mountain ridges of the Serranía de Ronda. This is also a village with less than 250 inhabitants.

In the village we can visit the church of Nuestra Señora del Rosario from the 16th century and on the outskirts of the village is the Fuente de los Peces, a fountain of Moorish origin that retains the peculiar charm of that era.

How to get there: https://goo.gl/maps/bsrbL6qv5je9zCtq6

The area is especially attractive during autumn when the leaves turn coloured and we can enjoy the chestnut picking. But Júzcar is also famous for another reason:

The whole village is painted blue. This is not because it is twinned with Chefchauen, but because Júzcar was the Smurf village. In 2011 was celebrated the world premiere of the film “The Smurfs” and the idea came up to paint the whole village blue, including the church and the cemetery. And so, it remained after the popular vote of its only 230 inhabitants.

There are 2 zip lines in Júzcar, suitable for both children and adults.  This outdoor adventure park also has a Tibetan bridge and several climbing walls.

From the viewpoint of the village we can see it in all its blue splendour.

From Júzcar there is a short route to the viewpoint Mirador del Nacimiento las Zúas, passing through chestnut trees and old water mills and an old Roman road. A good trail to do with children and take a refreshing dip in summer.

How to get there: https://goo.gl/maps/XCfaoHeegghWCTqw5

Faraján, with a population of about 250 inhabitants and situated at almost 650 metres above sea level, is one of the few villages in the Genal Valley located almost on the plain, on the top of a gentle hill surrounded by lush vegetation.

Faraján’s main attraction is its natural environment, its scenic beauty and the ease of the terrain for hiking.

From the village itself begins the Sendero de las Chorreras with the Balastar stream forming two spectacular waterfalls of about 50 metres.

It is advisable to see them after the rainy season when there is more water. Good shoes are required for the trail, as it is very steep, and sun protection.

How to get there: https://goo.gl/maps/FPsh2i2YyTHXwxJ67

This village situated 700 metres above the sea and with barely 250 inhabitants, is the birthplace of Fray Leopoldo, a beatified Capuchin monk.

We can visit his birth house or the Church of San Antonio de Padua, considered “The Cathedral of the Serranía“, due to its large dimensions, which contrast with the small size of the village.

In the basement of this building is the pantheon, the first cemetery of Alpandeire, where there are two mummies in a perfect state of preservation.

The viewpoint Mirador del Cuervo is situated above the village.

To the north of Alpandeire we can visit the Dolmen de Encinas Borrachas.

How to get there: https://goo.gl/maps/KmMzqYEUrCibsavX9

Villages of the Lower Genal

Adventure sports enthusiasts can enjoy a via ferrata accessible from the village, following a rural path. It is a good via ferrata for beginners with a monkey bridge and a Tibetan bridge. It is a good way to spend the morning and finish the day in the village inn, tasting the gastronomy of the sierra.

There is also new zip line across the village of Atajate.

Those who prefer more sybaritic activities can follow the route to the Museo Abierto del Mosto. Atajate produces excellent must and has installed an open-air museum, which through texts, illustrations and traditional tools allows us to enjoy all the culture related to wine.

How to get there: https://goo.gl/maps/Mn41RG7gaVFd9coz5

In this village of some 250 inhabitants located 700 metres above sea level stands out the Castillo de Benadalid, the remains of a small fortress of Roman origin, which since 1821 has been the village cemetery.

How to get there: https://goo.gl/maps/uosZYXVHLZyq2DrE6

Benalauría and its magnificent Views

Benalauría is situated at almost 670 metres above sea level and from the village you can see Gibraltar and the North African coast. Take into account that within the village there is quite a steep slope to walk. The car park is located in the upper part of the village.

From the Torreón de Benalauría we can enjoy beautiful views over the Genal Valley.

A few kilometres from the village there is a via ferrata with breath-taking views and ideal for beginners, with two monkey bridges. It is necessary to be in good physical shape and not to have vertigo. Do not enter without a guide or appropriate training.

There are several hiking routes on Wikiloc to get to know the surroundings of Benalauría. Just download the app and search for the village to find them.

In the first week of August, the village celebrates the Moors and Christians Festival, and if you go in summer, you cannot miss the municipal swimming pool, it has stunning views, as well as an ideal restaurant to eat at any time.

How to get there: https://goo.gl/maps/81EXG64fYPBGuDXB7

Algatocín and its famous Bakery

Algatocín is a charming village of just over 800 inhabitants at an altitude of over 700 metres, adapted to the terrain, with steep, narrow, winding streets and low whitewashed houses.

We can ascend to the Ermita del Santo in the highest part of the village. From its viewpoint we can enjoy the splendid views of the Serranía de Ronda and even the Rock of Gibraltar.

In the centre of the village is the 16th century Church of Nuestra Señora del Rosario, which according to tradition was built over the palace of Algatosia, the daughter of a Muslim king.

The Pan Piña bakery in Algatocín, run by baker Juan Manuel Moreno, makes one of the most expensive breads in the world from gold and silver.

How to get there: https://goo.gl/maps/URE31aAW7kD2mJva6

Benarrabá and its Africa Viewpoint

The viewpoint Mirador de África offers breathtaking views of the whole area, the valleys of the Guadiaro river to the north and the Genal river to the south, Sierra Bermeja, Alcornocales Natural Park and the Strait of Gibraltar, being possible to contemplate the African massif of the Rif on clear days.

Gaucín – The Balcony of the Serranía

From the Castillo del Águila we can enjoy spectacular views of the whole of Gaucín. It is in ruins, but the complex is very beautiful.

Next to the castle there is also a via ferrata (Via Ferrata Castillo del Aguila) with two monkey bridges not suitable for beginners.

From the Balcón de la Serranía you have spectacular views of the coast, the Rock of Gibraltar and as far as the Rif of the African coast.

How to get there: https://goo.gl/maps/AqRG8hFikTs7hwq69

Take into account that inside the village there is a drop of almost 300 metres. The slopes are very steep and parking is very difficult. It is better to park at the entrance of the village and walk.

We have stayed at the Posada Mirador de Jubrique for our excursions in the area and a visit to Genalguacil. We can highly recommend it.

How to get there: https://goo.gl/maps/9eSih8KBdB6Siid38

Genalguacil is literally a very picturesque white village. It is situated 500 m above sea level in the heart of Serranía de Ronda.

This small white village is famous for its Art Encounters which take place every two years. During 2 weeks international painters, sculptors, photographers or ceramists live together with the inhabitants of the village.

The pieces of art created during this time are permanently exhibited throughout the village, turning it into an open-air art museum.

We have been there, discover Genalguacil in our article!

How to get there: https://goo.gl/maps/XQh7BnpcGvwg9Y2MA

• The most expensive bread in the world is from Algatocín, specifically the Pan Piña bakery. Its regular customers are sheiks, Russian businessmen and Chinese millionaires.

It is made with rock salt extracted by hand, organic flours of quinoa, chia, oats, dehydrated tomato, roasted malt and water from the Algatocín mountains, gold and silver. 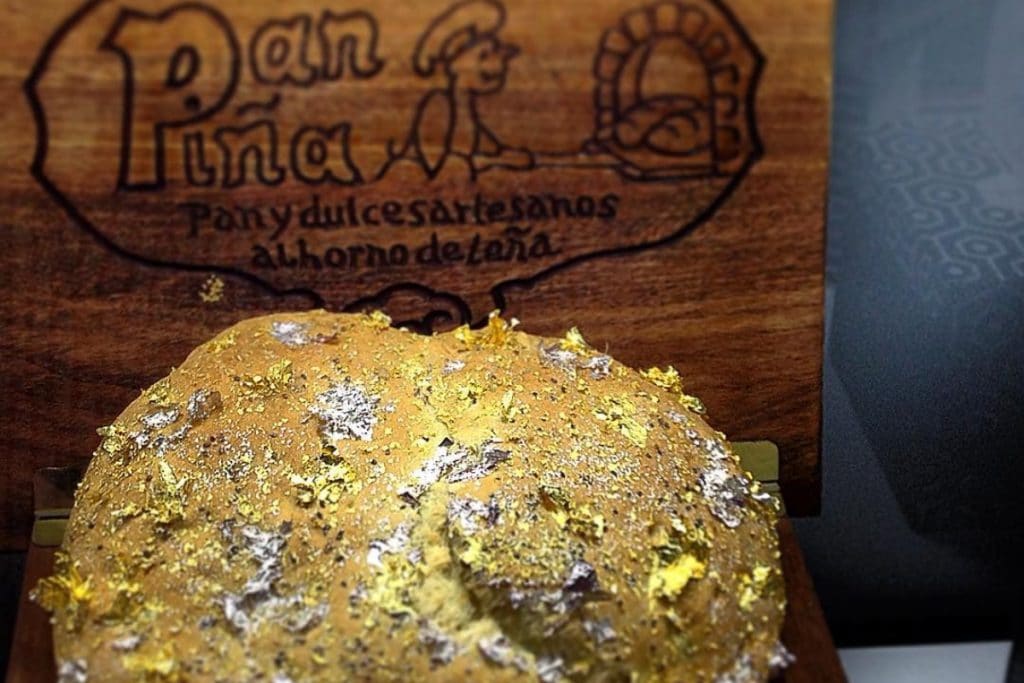 • Alpandeire is the birthplace of one of the most famous historical bandits of Serranía de Ronda. His name was Antonio Barbarán Jiménez, alias “El Barbarán”.

The MalagaCar Top 10 archaeological sites in Malaga
Sightseeing Malaga in one day- Our best tips!

Route of the 18 most spectacular caves in Malaga