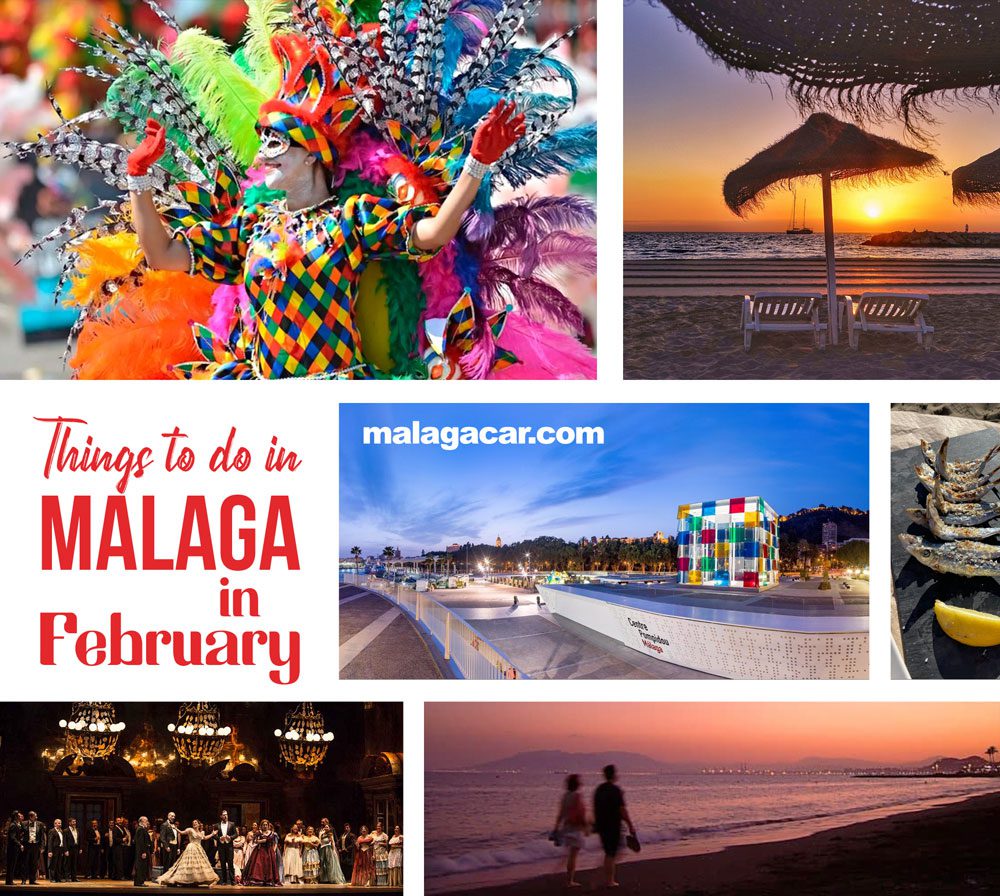 While the winter still maintains its cold grip over almost all Europe, here in Malaga already begin to bloom the almond trees.

If you come in February to Malaga take a look at our Events Calendar for February 2023 and discover everything you can do.

During the weekend of the 4th of February a new edition of the Almond Day will be held in Guaro, where you can enjoy hiking routes and taste the typical gastronomy of the area in the bars of the village.

Both routes will be led by guides who will interpret the surroundings and the landscape. 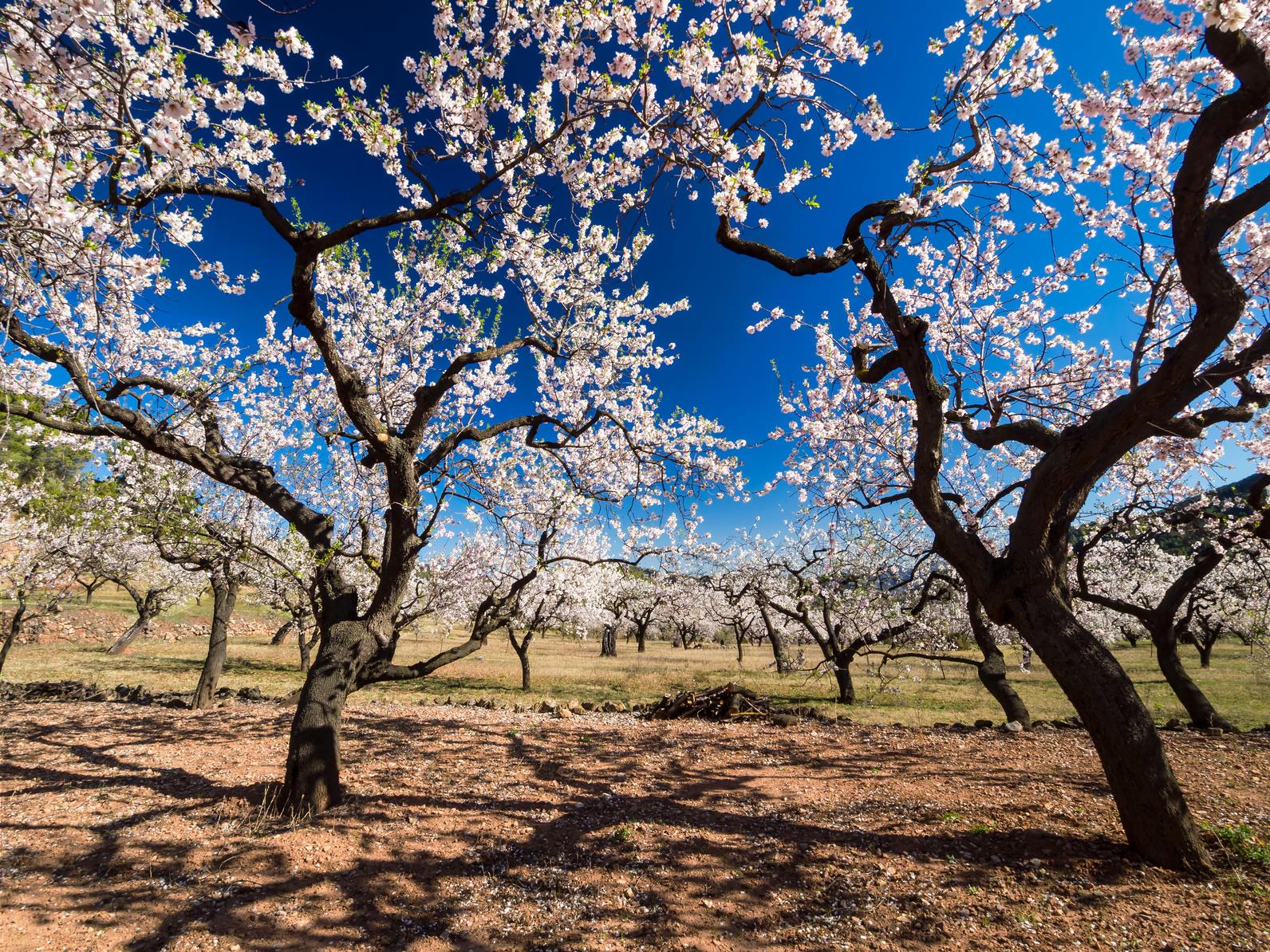 It is essential to register in advance to do the routes.
You can register until 3 February at this application form.

Where: Guaro and surroundings
When: 4th February
How to get there

A new edition of the Rockin’Race Jamboree festival takes place in Torremolinos in the first week of February. A festival dedicated to Root music with a wide range of styles from the 40’s, 50’s and early 60’s, this year presents 25 bands over 4 days in various locations in the popular Costa del Sol town.

The locations of the concerts this year are the hotel La Barracuda, the municipal auditorium of Torremolinos and the promenade Playamar next to the Burger King and Minigolf, where there will also be food trucks and classic cars, great atmosphere guaranteed! 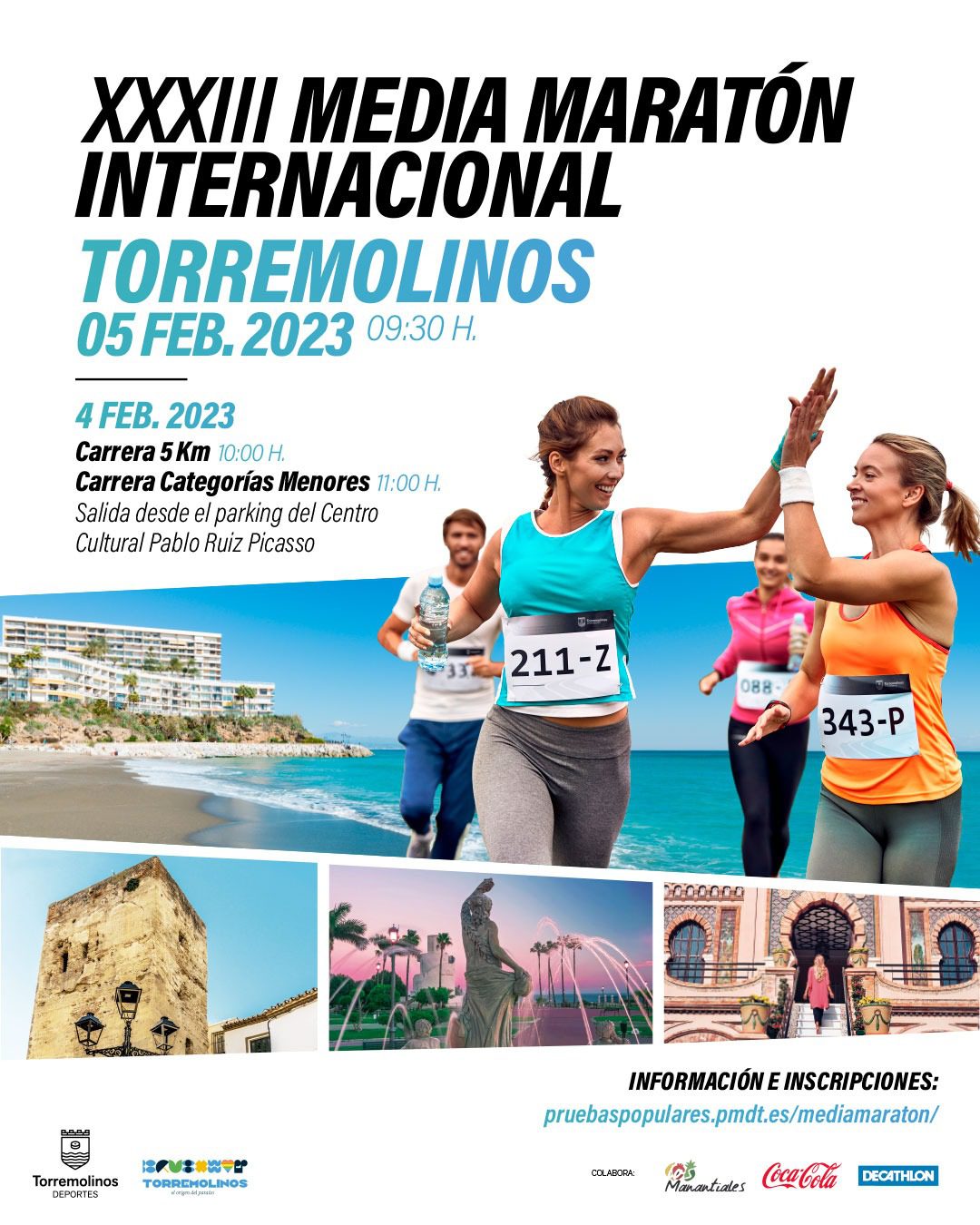 This popular marathon takes place on an urban circuit of about 21 km through the main streets and avenues of the Costa del Sol city.

This race is one of the oldest in the province of Malaga, with a participation of around 2,000 athletes, many of them foreign runners.

The Cervantes Theatre and the Echegaray Theatre located in the old part of the city will host this year’s 40th edition of the Malaga Theatre Festival.

In addition to the performances, there are many parallel activities that you can find here. 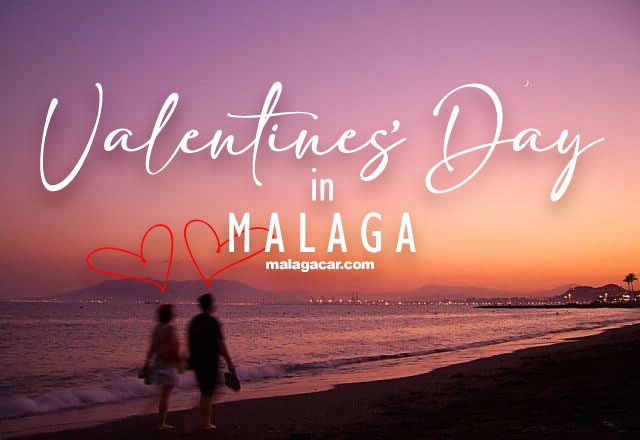 Spending Valentine’s Day in Malaga is a safe bet. Malaga and the Costa del Sol is a top quality destination to spend a few romantic days with your partner.

If you are seduced by the idea, take a look at our article dedicated to Valentine’s Day in Malaga and let yourself be inspired by the many things you can enjoy with your partner. 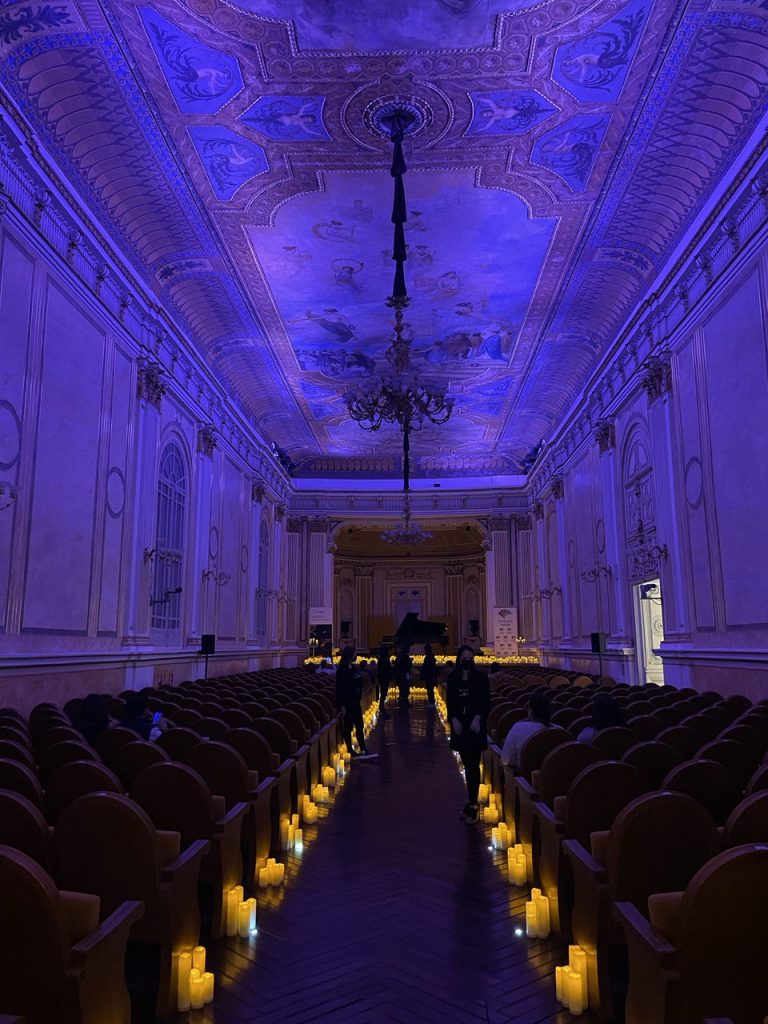 In the María Cristina Concert Hall, a 15th century Franciscan monastery located in the heart of Málaga, with exceptional acoustics and unique beauty.

We can personally recommend this experience of classical concerts and tributes by the light of hundreds of candles.

There are usually two performances on the same evening.

You can buy your tickets on the official website of Feverup.

Where: María Cristina Concert Hall, Malaga
How to get there 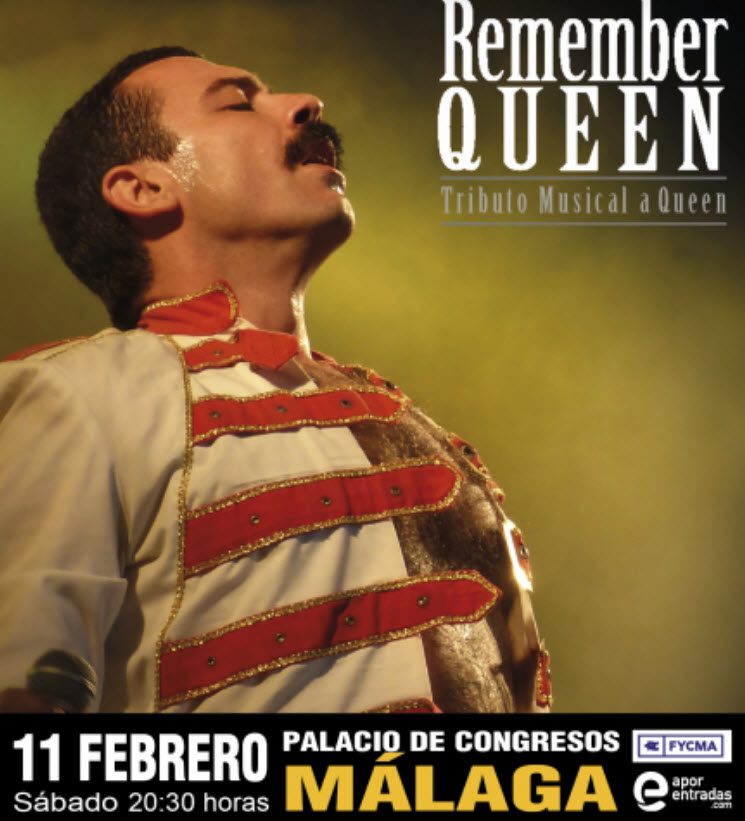 Live tribute concert to Queen at the Palacio de Congresos de Málaga, with the best hits of the legendary band.
When: 11 February at 8.30 pm.
Buy tickets

Malaga pays homage to this artist during 2023 with an extensive programme of exhibitions and events for the 50th anniversary of his death. For those who don’t know: Picasso was born in Malaga.

In Picasso’s birthplace at Plaza de la Merced you can see the exhibition of Bernardí Roig: “The Last Face and The Aphonia of the Minotaur” until 28th May 2023.

Do you like museums? Then you will be delighted to know that Malaga is the city with the most museums in its historic centre. Here you can discover the best museums in Malaga.
How to get there

Interactive games in the streets of Malaga and Marbella 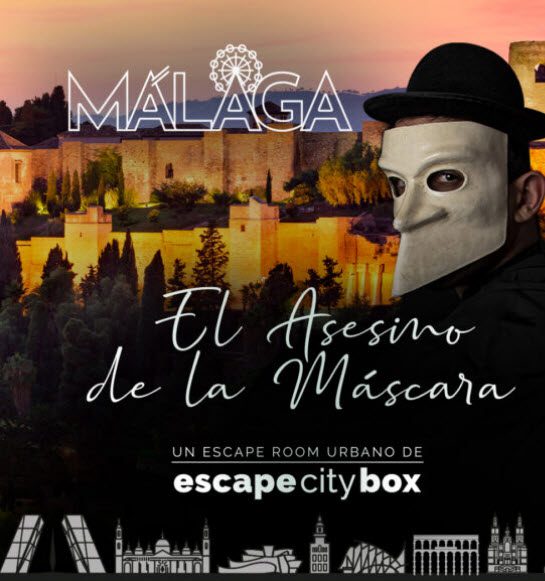 Do you like to play in a team in an outdoor escape room and at the same time get to know the historic centre of Malaga in a fun way?

Here we leave you the links to funny urban Escape Rooms Malaga and in Marbella for up to 5 people. 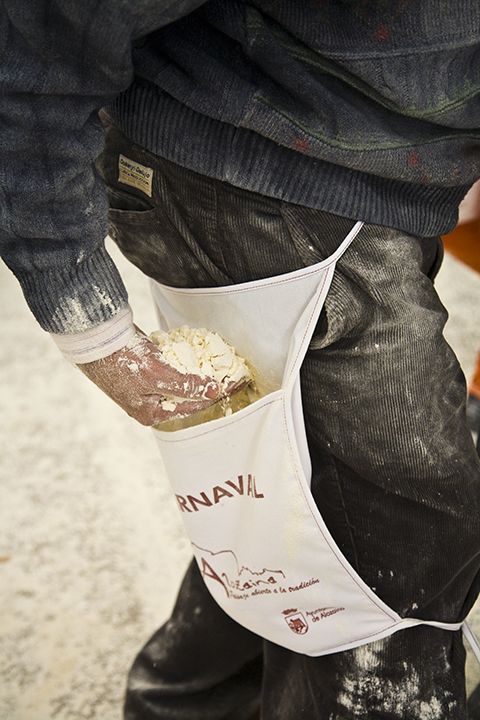 In Alozaina, located on the foothilla of Sierra de las Nieves, after Christmas, one of the most interesting moments in the municipality and the region are its winter festivities.
Shortly before Lent, the Carnaval de la Harina (Flour Carnival) takes place; the origin of this carnival dates back to the end of the 15th century.

The locals prepare themselves with bags full of flour and are ready to dye all the people they meet in their way white. A great festive atmosphere with music and dancing.

Where: Alozaina
When: From 25 to 26 February.
How to get there

Soup of the seven branches in El Burgo

The municipality of El Burgo, located in the Sierra de las Nieves National Park, celebrates on Andalusia Day the festival dedicated to the soup of the seven branches, an emblematic dish of the village.

Its curious name comes from the main ingredients of this soup: tomato, pepper, onion, garlic, bread, potato and wild asparagus. Its preparation, similar to that of other traditional soups, has the particularity of using mint.

During the day there are traditional sweets from the village and the region; they are made by hand in wood-fired ovens, such as roscos de vino, cubiletes, empanadillas, mantecados, tortas de aceite and the well-known alfajor de El Burgo of Arab origin.

Where: El Burgo
When: 28 February
How to get there 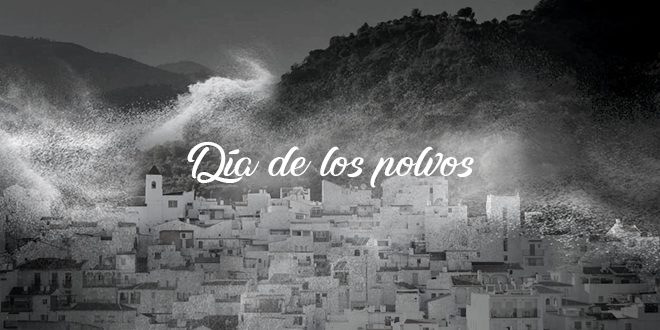 The Tolox Carnival is one of the oldest in our province.
This fiesta traditionally takes place the night before Ash Wednesday, and in which, according to custom, the villagers throw talcum powder at each other.

This tradition seems to date back to the 19th century, when young men used to play this game to propose to their sweethearts. The Tolox Carnival is one of the oldest carnivals known in our province.

Nowadays, this fiesta is celebrated in the Plaza Alta of the village and in the streets of the old quarter.

When: The date varies
Where: Tolox, Plaza de la Constitución
How to get there 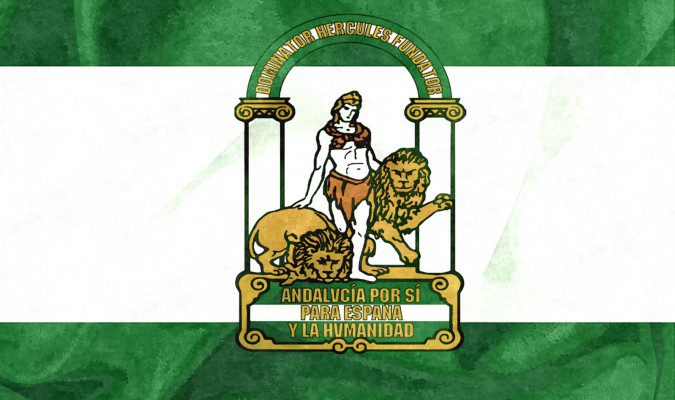 The Day of Andalusia is a holiday throughout the autonomous community with many festive events. 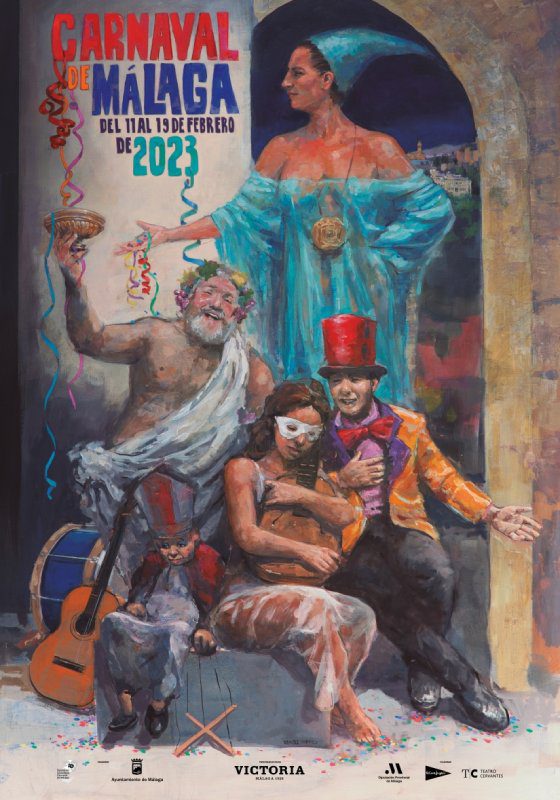 Carnival in Malaga is a lively party that takes place in the central streets and different stages of the city.

We can highlight the Children’s Parade, the Drag Queen Election, the Grand Parade through the Old Town to Plaza de la Merced, and the popular Battle of Flowers in Calle Larios.

Where: In the historic centre of Malaga
When: From 11 to 19 February
How to get there

Hiking routes to see the Almond Blossom in Malaga

Those who stroll through the rural areas of Malaga these days of February will find that spring has already arrived in this province. You will find extensive green fields and thousands of luminous yellow flowers that are a joy for the eyes and the soul.

During the month of February also takes place the almond blossom. Without a single leaf yet on the tree, the almost ethereal, white and pink flowers begin to appear first, depending on the variety, which colour entire fields and are beautiful to see.

We suggest some routes through the most beautiful places in our province at this time of year.

The Sierra de las Nieves National Park is one of those destinations worth discovering, with its authentic white villages and beautiful natural spaces. It is one of the areas in Malaga – as the name suggests – where it can snow in winter.

The villages nestled in the Sierra, with its highest peak, the 1,919 m Torrecilla, surrounded by extensive almond groves are a delight.

Bordering Sierra de las Nieves is the village of Guaro, from where there is a beautiful route to Tolox.
How to get there

Those who prefer a placid trip through the green Guadalhorce Valley, also known as the orchard of Malaga, can enjoy at this time of the year soft hills covered with fresh almost fluorescent green, fruit trees full of lemons and oranges and the beautiful almond trees in bloom.

Without a doubt, paradisiacal views. In Álora there are also impressive views of an ancient Moorish fortress perched on a hill.

The villages on this route are Álora, Almogía, Cártama and Pizarra. 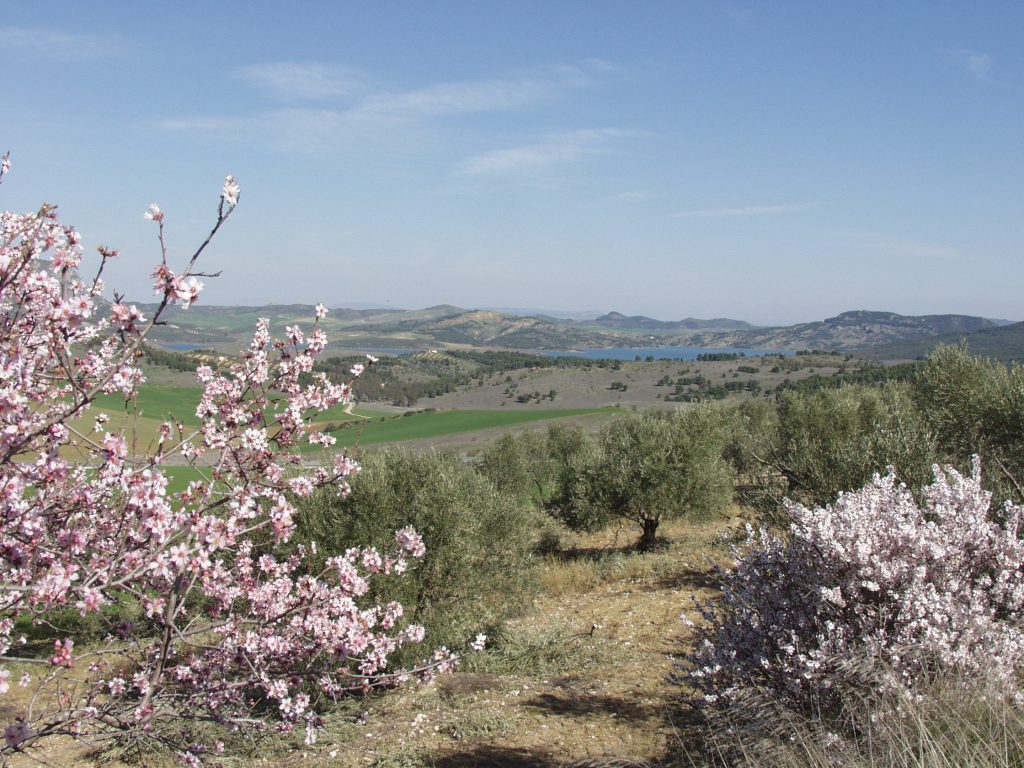 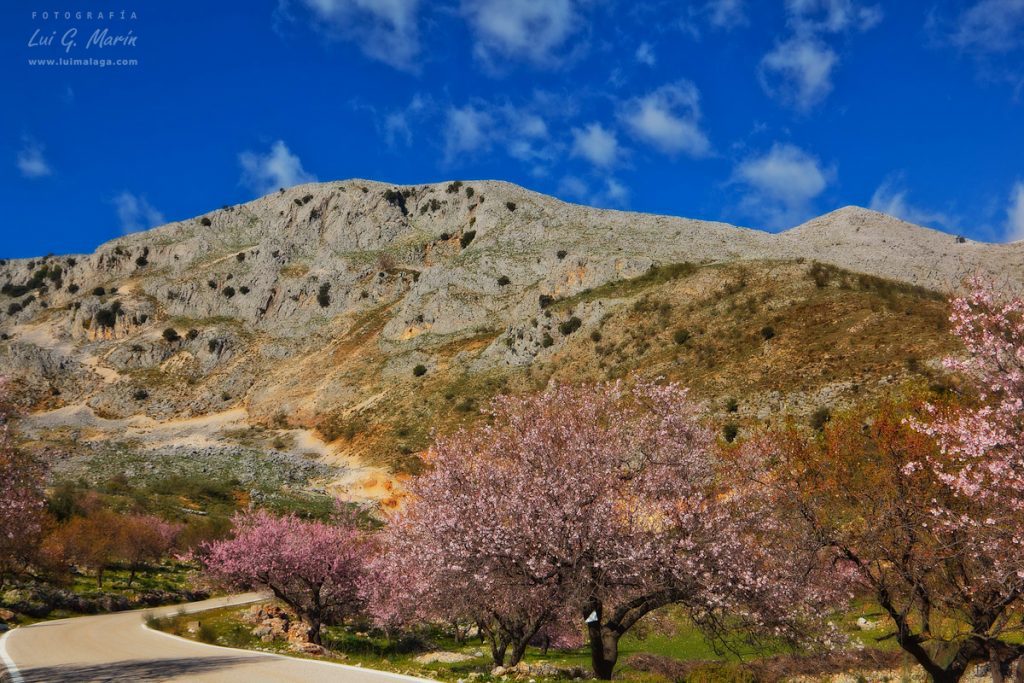 Another 2 routes take us to the white villages of the Axarquia, on the eastern Costa del Sol. We can make a complete route of all the villages or simply enjoy some of them with a walk in the fields and eating in a “venta” (inn), for sure you will enjoy one of the well-known “Platos de los Montes”(typical dishes of the area).

The views in this region are spectacular due to the proximity of the Natural Park Sierras de Tejeda and Almijara with the highest mountain in the province, the Maroma at 2,066 m where we may still be able to see a little snow.

This route is closer to the sea. In Arenas there is one of the most spectacular Almend groves in the province. The villages on this route are Moclinejo, Macharaviaya, Algarrobo, Sayalonga and Arenas.

And this route goes inland, towards the mountain villages situated between 400 m and 800 m above sea level.

You can find out more about hiking routes, other environments, parks and active tourism in Malaga on our website.

The weather in Malaga in February

Winter as such does not exist in Malaga. You could say that we go from autumn directly to spring.

It is true that February is usually the month with the lowest temperatures and – with a bit of luck – rain.

When there is rainfall, we can enjoy wonderful views of the highest peaks of Malaga covered in snow: La Sierra de las Nieves (National Park) and La Maroma.

Meanwhile, at lower altitudes, the first almond trees begin to blossom and the fields become green and covered with little yellow flowers.

The most annoying thing in Malaga in “winter” is the wind. So, it is a good idea to pack a mackintosh in your suitcase, along with a good jumper and thinner shirts, as the sun gets quite hot.

Both some brave locals and foreigners continue to bathe here all year round.

The temperature of the Alboran Sea in February is around 14/15 degrees.

Shopping centres in Malaga: Opening hours and holidays 2023
13 things to do on Valentine’s Day in Malaga