The Torcal is a natural area in the Antequera municipality, situated in Malaga province, and is characterised by the strange formations of its limestones, caused by the erosion over millions of years, in a mid mountain area of the Sierra Betica between the towns of Antequera and Villanueva de la Concepcion. It’s a highly recommended area if you like walking in natural environments and enjoying spectacular views.

The origins of El Torcal date back to the Mesozoic Era, specifically to the Jurassic period, and are part of the old ocean bed that ended up rising due to the tectonic forces. The rain water that is absorbed by the rock and then turns to ice due to the low temperatures, including the CO2 present in the rain water is what changed the shape of the rocks over centuries, leaving a landscape with such impossible shapes that amazes every single visitor.

El Torcal is also very rich in caves and other underground formations where they have found evident signs of occupation from the origins of the Neolithic. The origin of all these cavities that we'll find is also related with the action of the water over millions of years.

In some of the recommended routes for trekking in El Torcal, you’ll cross the labyrinth of rocks, you’ll see mountain goats in their natural habitat and you’ll enjoy a walk contemplating curious rock formations. Once the route has finished you can enjoy the viewpoint of Las Ventanillas that you’ll find next to the parking lot, from this viewpoint you can see the Costa del Sol on a clear day. 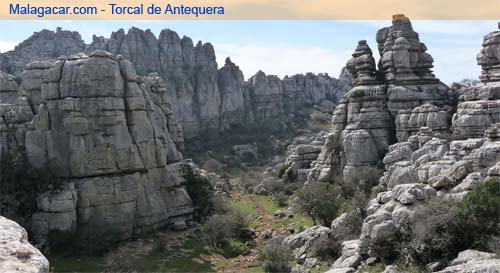 There are several routes that we can choose from depending on the difficulty and length:

Green route: A circular course that leaves from the parking lot and tours around the Upper Torcal area, where we’ll be able to look over the viewpoint of Las Ventanillas with a beautiful panoramic view.

Yellow route: Medium difficulty over 3 km that should take approximately 1 hour. This course is an extension of the green route. It’s also a circular course so we won’t get lost.

Red route: With a length of 2.7 km, medium difficulty and an estimated duration of just over an hour. This course departs from the Visitors’ centre and also tours around the Upper Torcal area. It’s a circular course that ends in the same place it begins.

Upper Camorro route: This 6.5 km route, of medium difficulty, needs a special permit to tour it. It’s a lineal route and runs along the Lower Torcal area.

The lake in 'Fuente de Piedra' (stone fountain) is situated very near and it's the main lake in the area but not the only one in Antequera. If we visit El Torcal we can also visit 'Los Montes de Malaga' (the Malaga mountains), that are located between the municipality and the capital city of Malaga.

To the southwest of Antequera we'll find 'El desfiladero de los Gaitanes' (the narrow gorge of Los Gaitanes), a spot with a special beauty and charm, although you may want to spend more time visiting this natural area situated in El Chorro.

How to get to El Torcal in Antequera

From Malaga you take the N-331 to Antequera, from there the C-3310 until just before reaching Villanueva de la Concepcion.

Always bare in mind the following considerations when you visit this natural area: