We know that its name derives from the Arabic name of the same region meaning the eastern lands, the area has the river Velez as an axis and Vélez Málaga as the centre. The Axarquía is traditionally the land of wine and grapes and today also of almonds, oil and citric fruits. There are also cherimoyas, avocados, mangoes, and many other fruits from overseas. 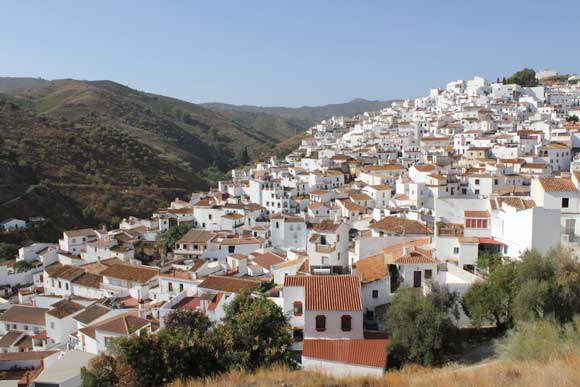 Taking the N340 highway you will arrive at Torre del Mar after passing the Peñón hill, with its Osborne tower in whose base there are stonemasons and Venetian graves at its base; from Torre del Mar you arrive at Vélez-Málaga in five minutes, and in Vélez you should take a walk through the streets and gardens, and especially go up to Santa Maria, its most beautiful church that also dominates the whiteness of the village.

From Vélez you can begin the magnificent route of the minarets; you are directed firstly towards Arenas, from there to Daimalos, where the first minaret is, whitewashed and simple. You can continue afterwards to Archez, where you will find the best of all, and you can ascend to Canillas de Albaida and Cómpeta, two large villages worth a visit; from Canillas there are interesting accesses to the Sierra Amijara, and in Cómpeta you can try the famous wine. From there we can go towards Torrox, going up a hill in the middle of its magnificent orchards, and once in Torrox it we have an opportunity to try its rich pastries before arriving at Frigiliana, a very beautiful hillside town, dominating the sea and the fertile plain of the Higuerón river; its streets are an evocation of its Moorish past and its residents are proud of it.

From Archez you could also continue towards the north via Salares and Sedela, precious enclaves of the Axarqueña mountains, and leave by Canillas de Aceituno, already on the side of the Sierra Tejeda to descend into valley below.

Going up directly from Vélez to the north, you can visit Periana, inland village, rural and on the edge of the calcareous mountains that hug the region taking the Boquete de Zafarraya, natural pass to Granada, and Sol, path to the lands of Alfarnate and Loja. In Periana there is a tourist village and at its end, in Mondron, the best oil.

From Velez you can take the path to the west and via Benamargosa you can arrive at the charming town of El Borge. But the spot that is essential to visit is the central watchtower of Axarquia, Comares, elevated on a hill that dominates all of the region; we can go back to Málaga via Olías or by the highway of Los Montes, or also from Vélez, by Benamargosa and Salto del Negro. Comares is beautiful inside, its streets, small plazas, and the castle, and towards the outside of the area, for the extraordinary views that it offers.