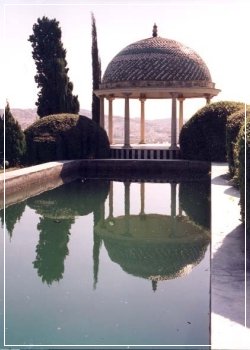 Around the year 1855, Jorge Loring and Amalia Heredia purchased some ranches situated to the north of Malaga where there were previously olive, almond and citrus fruit trees. Their plans began during a honeymoon, and due to their high purchasing power and their relation with European gardens, they brought back exotic plants from different countries all over the world.

In the year 1911 the botanical garden was purchased by a family from Bilbao who continued expanding it until finally in the year 1990 it was purchased by the town hall of Malaga who divided it into 2 parts to build the Limonero reservoir. After a few construction works it was open to the public again in 1994 as a historical botanical garden and cultural, didactic and scientific centre.

The garden of the Conception was, back in the day, a meeting centre of illustrious personalities, around the 19th century it gathered politicians, artists and the nobility of Malaga who frequented and enjoyed this garden, something that contributed to the construction of one of its buildings like the Palace-House, the house of the Cyprus trees, 2 greenhouses, bridges, a viewpoint and the Loringian Museum where they exhibited the archaeological remains found in Malaga with excavations financed by the Loring family.

Another of the architectonic elements that is worth a visit is the part of the San Telmo aqueduct, built in 1782 it was the most important hydraulic work of the 18th century in Spain. It was more than 10 km long and provided La Concepcion with one water supply.

Today the botanical garden is considered a historical-artistic garden, an asset of cultural interest. 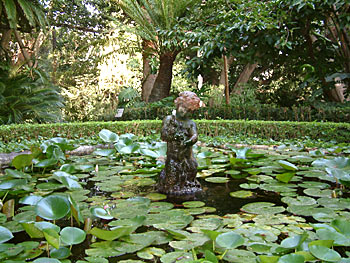 The diversity of the flora reaches over 2000 species where we must highlight the grove with a few specimens of over 100 years old. Amongst it the subtropical species stand out, like a collection of palm trees, the best in Europe, that has unique specimens of great size, as well as water plants.

The plant species present in the park come from Europe, America, Asia, Africa and Oceania. Some of the species we’ll find there are:

Diversity of birds in the botanical garden

There is a wide diversity of bird species in the park, some of them are habitual while others only fly over it or have been spotted at some point. This park is undoubtedly the ideal place for the ornithologists:

Amongst the habitual birds in the park we’ll find all of those in the following list:

How to get to the Botanical Garden

On the following map you’ll be able to observe the botanical garden’s location and a route to get there by car from Malaga airport. The garden is one of those places that all of those nature enthusiasts mustn’t leave without a visit.

If you don’t have a vehicle hired in Malaga, you can use the bus, that has a line that goes from the main boulevard (alameda) to the botanical garden, the line 61 that runs every 60 minutes.