Located in the Bishop’s Square, this building near the Cathedral of Malaga was built in the late 18th century and part of this building hosts the Sacred Art Museum of Malaga.

History of the episcopal palace 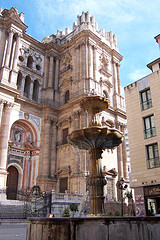 The construction of this palace was the most important work of its author and one of the best examples of the civil architecture in Malaga, and in it, Ramos distributes the spaces around two successive patios, clustering around the first one of them the public area of the complex and lifting a low body with archeries, while the second has its fronts open with balconies, locating on the side an imperial type double-throw staircase that connects with the top area of the palace. Around the second patio, also organised in 2 high floors with a light structure of archery, he distributed the private dependencies that are destined to the prelate.

Very important for its compositional top quality is the design of the main facade, with three high floors, that is articulated through paired and simple pilasters of low emphasis amongst which have large empty spaces as balconies on the top floors and large windows on the floor below. On a classicist baroque where the straight and curved pediments of the superior empty spaces stand out, its facade has a magnificent frontal altarpiece that is superimposed in the middle, in three high bodies, combining marble in grey for the background and pink on the columns, of which its number gradually decreases in each one of the top floors. In it, the great balcony of moved design above the gateway, the elegant finishes with which the pilasters and columns are crowned, and the emblems that are placed above the door of access, stand out. It’s also worth mentioning in the last body of this facade the deep alcove framed between pilasters with garlands that hosts in its interior an image of the Virgin of Las Angustias, a work of Fernando Ruiz.

When Antonio Ramos died in 1782, the artworks of this palace were continued by his successor Jose Martin de Aldehuela, perhaps the author of the stone balustrade with which the top of the building finishes, added sometime later on.

By the Cathedral and the Bishop’s Square is one of most beautiful spots in Malaga and has been the scene of films of ‘El Puente de San Luis Rey’.

The origin of this square is Muslim although it gained certain shape already in the 18th century with the construction of the Cathedral of Malaga and the Episcopal Palace. In the late 20th century the square was reformed as well as many of its buildings.

If we visit the Bishop’s square, we’ll see that in the centre there is a fountain that dates back to the year 1785.