This fortress is situated on the Gibralfaro hill in Malaga and was built upon some old Phoenician ruins by Abdurrahman the 3rd after the entrance of the Arab troops to the south of the peninsula and its settlement in al-Andalus.

The Gibralfaro fortress was enlarged and converted into a castle in the year 1340 by the Nazareth king Yusuf the 1st. This castle was one of the buildings that held back the sieges of the Catholic Kings until they took over the place in 1487, where Fernando the Catholic used as a residence.

The castle was originally built to protect the Alcazaba (the citadel) from the sieges of the Christian armies and to keep the Arab troops inside its walls.

Every visitor can go on a touristic tour around the inside of the castle, from where one can observe some impressive views of the city, and take a picture which is already a reference of Malaga, the view of the Malaga port area from the height of the Gibralfaro castle. 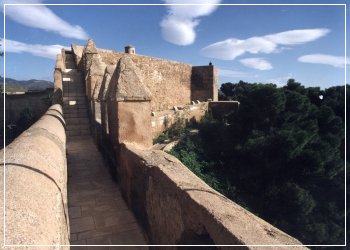 Inside the castle, in the ammunition area, we’ll find elements of the day to day life in the castle in ancient times and the different uniforms of the soldiers from each period that have passed through the fortress over the 16th, 17th, 18th, 19th and finally the 20th century with the soldiers of the regiment.

How to get to Gibralfaro

Gibralfaro is situated in the centre of Malaga, very near the cruise ships port (where we can eat or relax going for a walk on a tourist visit to the area). If we have hired a car in Malaga or we go in our own vehicle, we recommend the use of the area’s public parking.

We can get there by using the train and the bus, taking the 35 line from the main Avenue until the Gibralfaro castle stop. The tourist bus also passes through the area leaving the Malaga station on its way around the centre until the east of the city.

On the map below you’ll be able to see the exact situation of the Gibralfaro castle in Malaga, a spot well worth a visit: