Seville Airport dates back to 1940. It experienced its greatest expansion as of 1989 when, with a view to Global Exposure, a new terminal building was built, the aircraft apron was extended to 200,000 square metres and a new access road was built from the national N-IV road. A new control tower was built to the south of the runway. These new facilities were inaugurated in July 1991.

The architect Rafael Moneo designed a building rooted in Sevillian culture with three traditional components: the mosque, the palace and the orange trees. Travellers are greeted by an orchard of orange trees in the airport grounds and then enter a blue expanse created by the effect of the glazed tiles and crowned with a series of vaulted arches.

1992 was Seville's most important year, with a total of 2,896,241 passengers passing through Seville airport. Despite almost half logically being lost during the following year, from 1995 to 2001 it did not stop growing, even exceeding two million passengers. After a slight drop in 2002, an 11.1% increase in passengers was experienced from 2003 until now. 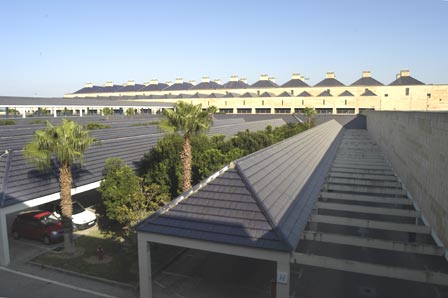