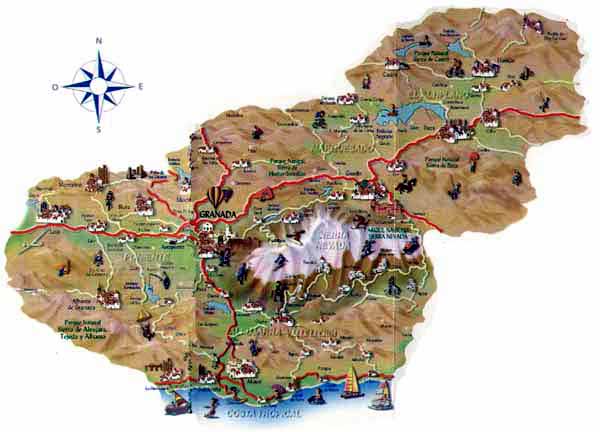 The province of Granada is made up of several regions, the province situated between Jaen and Almeria has an airport close to the capital and is the destination of many tourists throughout the year.

Granada is also very close to the province of Malaga, so if you have your own car you can get there in less than 2 hours.

Among the places to visit in the province are the following:

The city of Granada
An ancient city of kings with monuments that remind us of its past, a history marked mainly by the Muslim and Christian culture but which goes back a long way in time.

Alpujarra
This area of Granada, located between the Sierra Nevada and the Sierra de Gádor mountains, has the highest peak of the peninsula, the Mulhacén, and reaches the shores of the Mediterranean.

The Altiplano: Baza and Huescar
Plains situated at an altitude of more than 1000 metres above sea level to the northeast of Granada.

The Tropical Coast
Small coves and kilometres of beaches with clean waters, 320 days of sunshine a year and a pleasant temperature.

Guadix and the Marquesado
Located to the east of Granada with archaeological sites of the first European inhabitants and typical cave dwellings.

Poniente Granadino
This area of Granada has mountains, valleys and countryside with a very varied landscape.

Sierra Nevada
This region, next to the Alpujarra, is home to the highest peaks of the peninsula and one of the best ski resorts in Europe.

Province of Granada in Google Maps