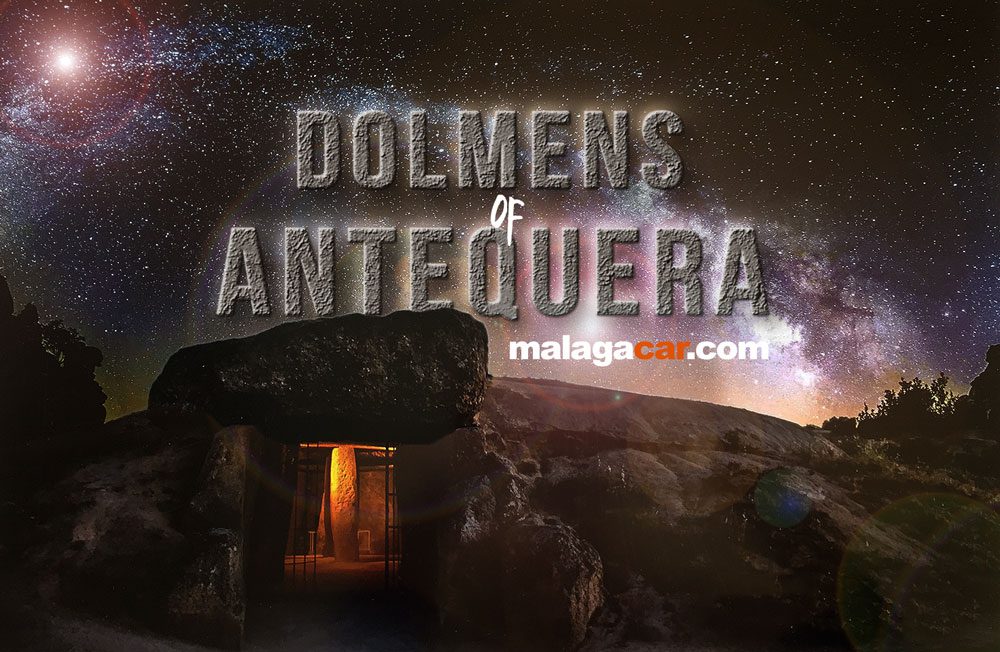 Let’s find out all the information about the Dolmens of Antequera; benefit from your rental car by taking a journey to the Andalusian Stonehenge.

What is a Dolmen?

Dolmens are prehistoric constructions made of large stones. For the construction two or more of those large stones are placed vertically before adding more horizontally; at least one on top (Dolmen = “large stone table” in Breton).

Interestingly, Dolmens exist all over the world (Asia, Middle East, Europe and Africa), regardless of culture. In Korea there are the most dolmens, about 35 000 Dolmens, which is almost 40 % of all the dolmens in the world.

In Antequera, Malaga we have our own particular Stonehenge. The Dolmen in Antequera are from the Neolithic period. That means, to give you an idea, these constructions are an incredible 6,500 years old.

The Dolmens of Antequera, the Andalusian Stonehenge

On the outskirts of Antequera there are a total of 3 dolmens from different prehistoric periods. This monument is protected by the UNESCO World Heritage and are known in Spanish as the Conjunto Arqueológico Dolmenes de Antequera (Antequera Dolmens Archaeological Ensemble).

The oldest and most colossal, the Dolmen of Menga is known since old times. Meanwhile the other two did not see the light of day until the beginning of the 20th century. They were rediscovered by two local gardener brothers who carried out excavations at their own expense. From there, one of them has received their surname, the Dolmen de Viera.

We are going to look at the 3 below. And as you will see, each one has something that makes it very special.

The purpose of the Dolmens might be as burial place. Due to some of the particularities of the construction, we can think it was not their exclusive use, in case it was.

The Dolmen of Menga 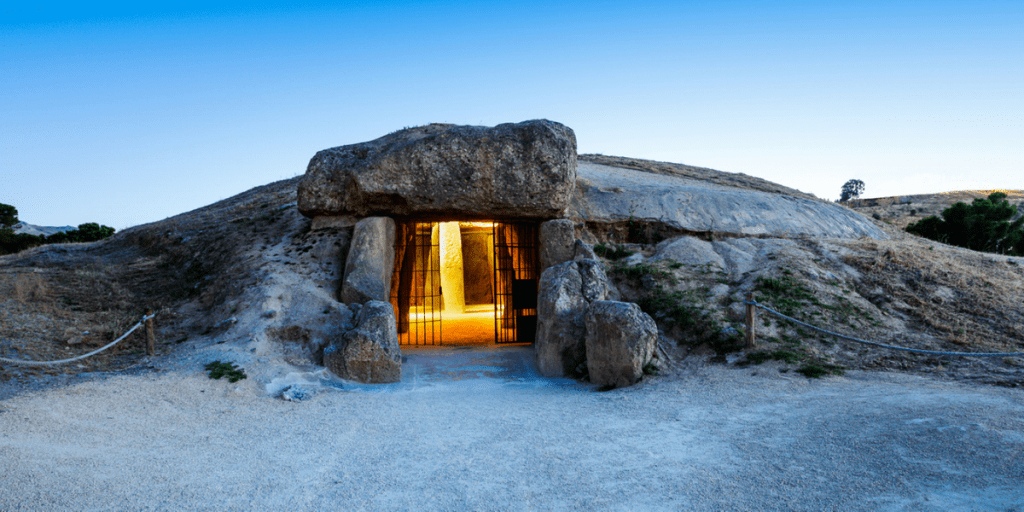 This is the most impressive and oldest of the complex, some 5,700 years old, some 1,200 years older than Stonehenge in England.

The spectacular thing about this Dolmen is the skill of its construction. The weights of the pillars and the roof slabs are simply impressive: The largest weighs 150 tons, one of the largest megaliths in Europe.

The Menga corridor faces directly towards the Peña de los Enamorados,. This mountain has such a particular profile that the locals also call it “Cabeza de Indio” (Indian’s Head).

The Dolmen of Viera

The Dolmen of Viera, apart from its impressive age of about 4,500 years, stands out for a singular astronomical phenomenon:

It is oriented in such a way that at the dawn of the spring and autumn equinoxes the sun’s rays penetrate through the entrance and illuminate the burial chamber.

For this event the Dolmen opens at an unusual time and for a very limited capacity (and very coveted) that is published a few days before in their Facebook. You have to make a reservation in advance!

It is the largest of the three dolmens, located about 4 km from the other two on a hill. 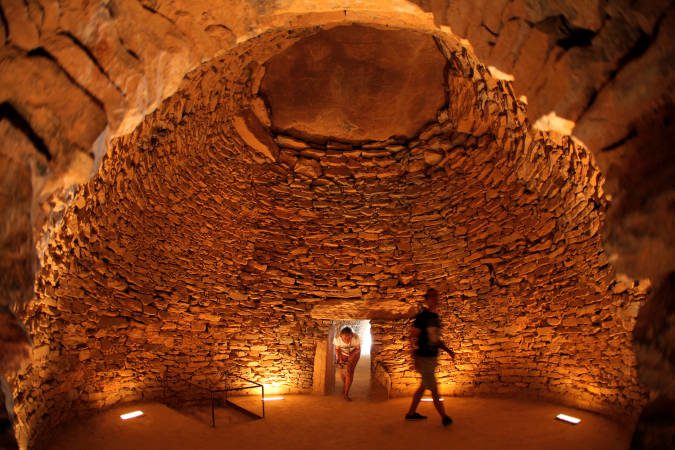 This Dolmen also has several peculiarities:

It has a huge dome, it points directly towards the highest point of the Sierra de El Torcal. During the winter solstice, the sun is aligned with its corridor, so that the rays reach the deepest part of the dolmen.

This rare phenomenon was not discovered until 2008 by chance.

Visit to the Archaeological Site 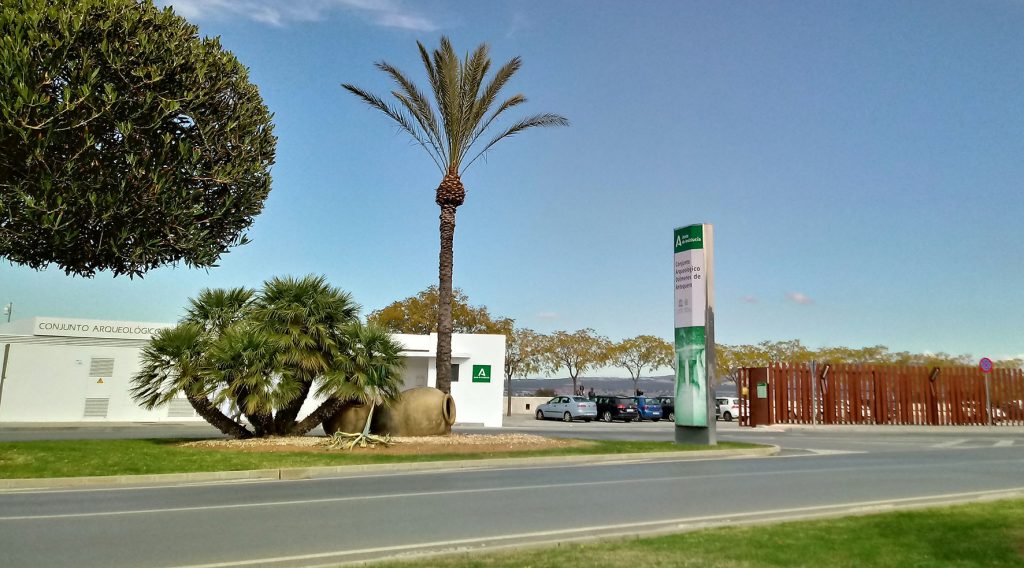 The Archaeological Site has wheelchairs available at the Museum Reception for anyone who requests them.

However, it is recommended you take advantage of the free guided tours (booking required), information below.

El Romeral Dolmen is located outside the archaeological site at a distance of 3.4 km, so it is necessary to travel by car.

The archaeological site has an interpretation centre. There you can watch an audio-visual presentation explaining the different hypotheses about its construction and the history of the site.

Activities in the Dolmens 2022

Free guided tours of the monuments

You can visit the Dolmens free of charge during all the year.

In case you want a guide, they offer tours in four languages:  English, French, Italian, Spanish and French. Remember to book well in advance.

Enclosure 1 (Interpretation Centre, megalithic monuments of Menga and Viera): Send a booking request to visitasdolmenesdeantequera.ccul@juntadeandalucia.es with the following details: name and surname, telephone number, day and time and number of visitors.

Enclosure 2 (Tholos El Romeral): You don´t require reservation. From 12 noon to 2 pm three guided tours are given at 30-minute intervals depending on the number of visitors.

The visit begins at the Site Museum with the projection of the Menga audio-visual and shows the construction process.

Celebrations of the Sun

The Dolmens open at a special time to witness the astronomical-luminary phenomena. This event takes place during the spring, autumn equinoxes, summer and winter solstices.

The Celebrations of the Sun take place at:

For all celebrations, you have to make a reservation request, on the dates indicated on their Facebook page, via email: visitasdolmenesdeantequera.ccul@juntadeandalucia.es.

Celebrations of the Moon

Guided nocturnal visits to the megalithic monuments of Menga and Viera. Every Wednesday from mid-June to mid-September, from 8 pm to 10 pm.

It is essential you make a reservation request by e-mail: visitasdolmenesdeantequera.ccul@juntadeandalucia.es (indicating MOONLIGHT in the subject line).

The MengaStones Festival starts on the summer solstice and ends on the autumn equinox.

It is one of the major events during the summer in Antequera. This festival offers free performances and activities, such as contemporary dance, video creation, world music, ancestral music, dance, flamenco, jazz, theatre and storytelling in the open-air archaeological site.

If you have travelled to Antequera to visit the Dolmenes and still have energy left to explore the surrounding area, here are the must-see places.

Like something out of a fairy tale, these unique limestone formations rise more than a thousand metres above sea level.

This unique natural site, which is a UNESCO World Heritage Site, has two short and easy routes, an interpretation centre and a restaurant to recharge your batteries.

Find out everything you need to know to visit El Torcal de Antequera in our article. 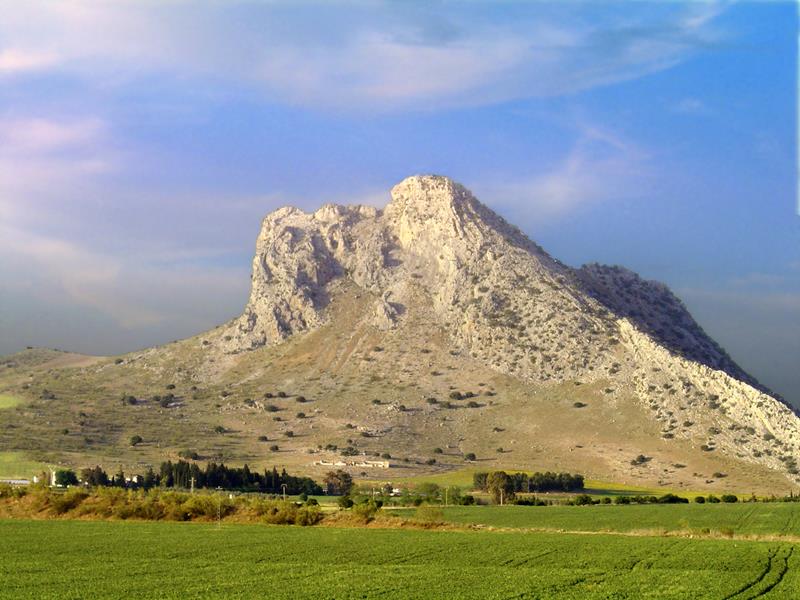 The Peña de los Enamorados is a limestone rock 870 of metres height with a very peculiar shape and a name that goes back to legend.

Because it resembles the relief of a head, it is also popularly known as “Cabeza de Indio” (Indian’s Head).

Its name comes from the ancient legend of a tragic love between a Christian and a Moorish girl; she jumped off the cliff together to escape their persecutors and a life apart.

Description of the hiking route to the Peña de los Enamorados on Wikiloc. 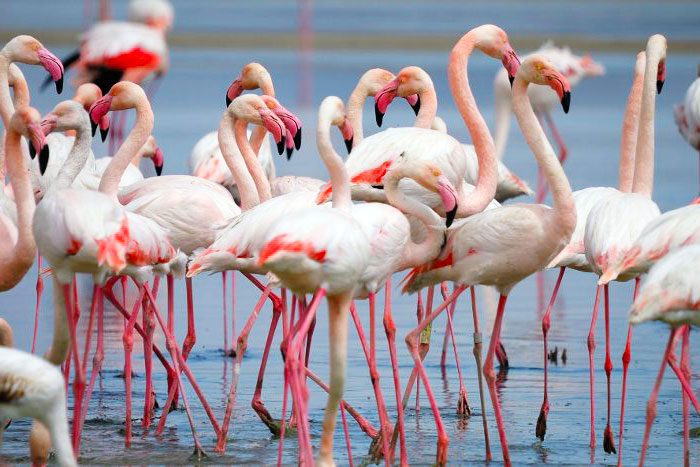 If you feel like exploring a little more of the surrounding area, we can recommend the Laguna Fuente de Piedra; it is about 25 km from Antequera in the direction of Seville.

This large nature reserve of saline waters is home to the largest colony of pink flamingos on the Iberian Peninsula. In addition, there is a great variety of birds during the nesting period between March and July.

The best time of the year to observe these birds is in spring.

If you would like to book a guided tour, you can find more information at this link. 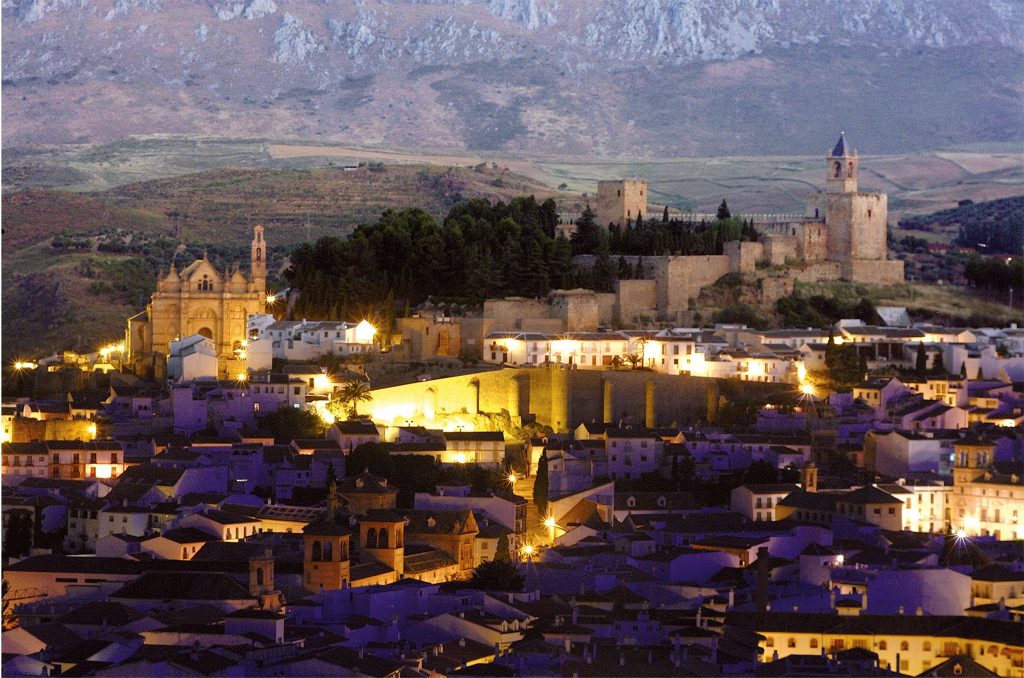 Since ancient times, Antequera has been a vital axis due to its geographical location in the centre of Andalusia. There were great communication routes between Malaga and Cordoba, also with Granada and Seville.

The area has been inhabited for thousands of years. Later settled the Carthaginians, Romans and Muslims before giving way to the Christian conquest. They left an enormous legacy of historical and monumental heritage in the city.

Stroll through the old quarter, enjoy the many viewpoints. Visit the Collegiate Church of Santa María, a jewel of the Andalusian Renaissance, or the Alcazaba monumental complex. Just to give you a few ideas.

And last but not least, enjoy its taverns, bars and restaurants. Try typical dishes such as Porra antequerana, migas, mollete or the famous sweet Bienmesabe. 13 things to do on Valentine’s Day in Malaga