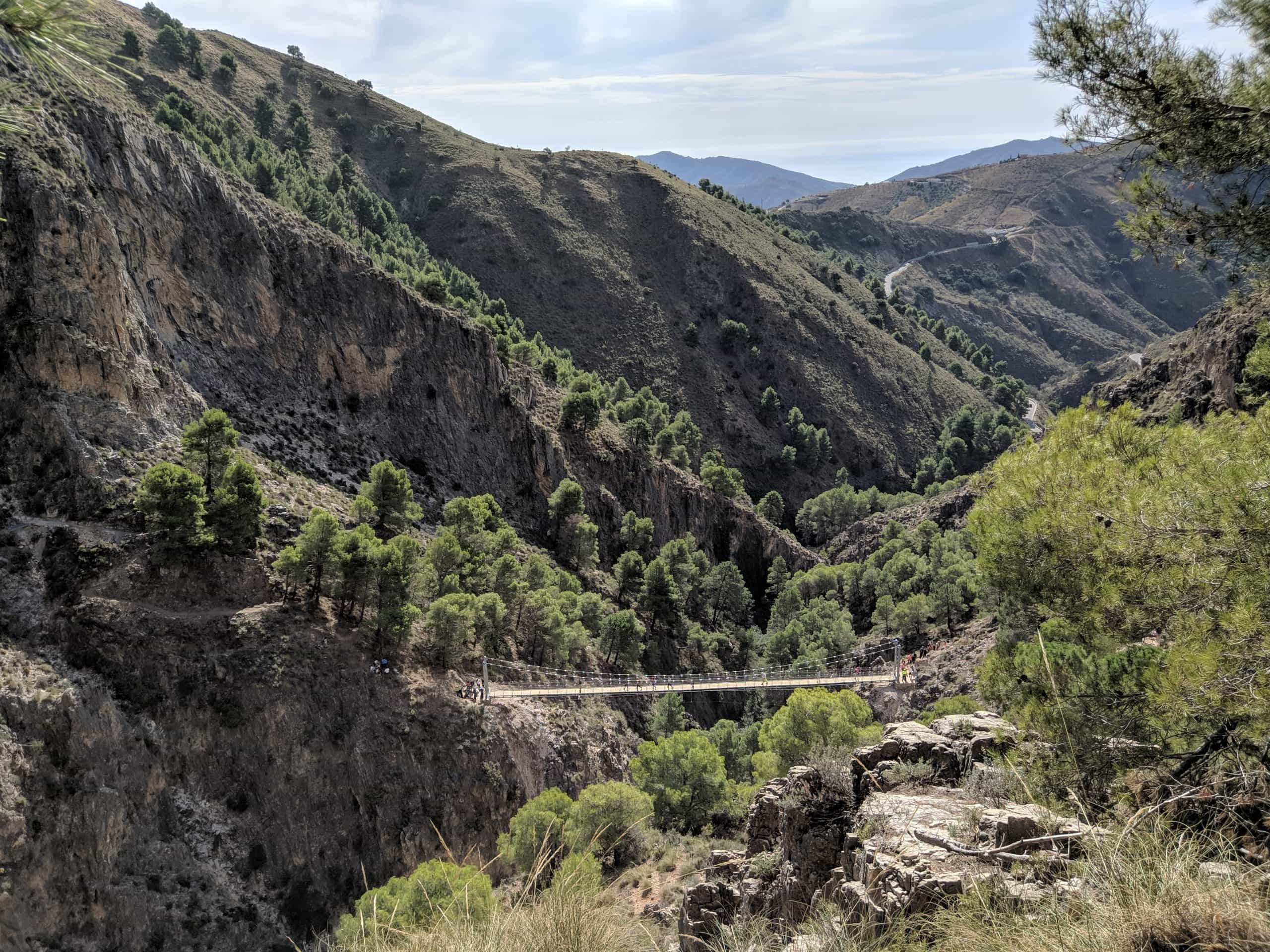 Malaga’s Axarquia can add an attractive natural space to its great offer of rural tourism: El Saltillo, with a 50-metre-long wooden footbridge, linking the municipalities of Canillas de Aceituno and Sedella.

We have always loved to show you places in the interior of the province of Malaga. And more so now, since Covid, rural tourism is a growing activity as an alternative to the crowded places.

However, we would also like to point out: The most emblematic places, such as the Caminito del Rey or El Torcal, are overcrowded at weekends and on long weekends. We thus recommend that you enjoy these beautiful places during the week whenever you can.

The El Saltillo route is a gorge that links the municipalities of Sedella and Canillas de Aceituno. It is running alongside the ditches that carry water to the village from the river.

It has existed for many years. And although it has never had the reputation of the Caminito del Rey (perhaps because there are not so many climbers who have killed themselves…), they share a certain similarity because of the spectacular views and a certain vertiginousness in their route.

Now a new element has been added to this route, in the form of 50 metres long and 1.20 metres wide hanging bridge. It is situated in 50 metres height over the course of the Almanchares River.

Metal walkways over 100 metres high built on rocky overhangs and ancient masonry walls have also been arranged for safe passage.

Thus, this route through the Sierra Tejeda Natural Park is now a highly attractive one: With one of the three largest suspension bridges in Spain in natural areas (the others are in Los Cahorros in Monachil, in our beautiful neighbouring province of Granada and in Congost de Mont-Rebei, Lérida).

As an interesting fact: Its construction, being such a steep terrain, has required sometimes the use of mules to transport materials, as well as an ATV on the wider paths. And for the construction of the bridge, a helicopter and a zip line have been used to move the materials from one side of the gorge to the other.

How is the route of El Saltillo

We warn you from the beginning: It is not an easy route. Although scenically it can be easily compared with the Caminito del Rey, it is much more difficult.

The route begins in the upper part of the village of Canillas de Aceituno. There also begins the steep climb to the top of La Maroma. It is the highest mountain in the province of Malaga with more than 2,000 metres height over sea level.

But we will not climb that high, we “only” have about 250 meters of height difference from the village to the bridge.

It sounds like little, but it requires quite a lot of physical effort, since we are not talking about pleasant hiking trails here.

A large part of the route runs alongside the water channel as a guide. It has narrow paths and steep slopes without safety railings.

The canal does accompany us much of the route, which is a total of 8 kilometres round trip. Along it there are spectacular views at a height of 150 metres with the hanging footbridges. 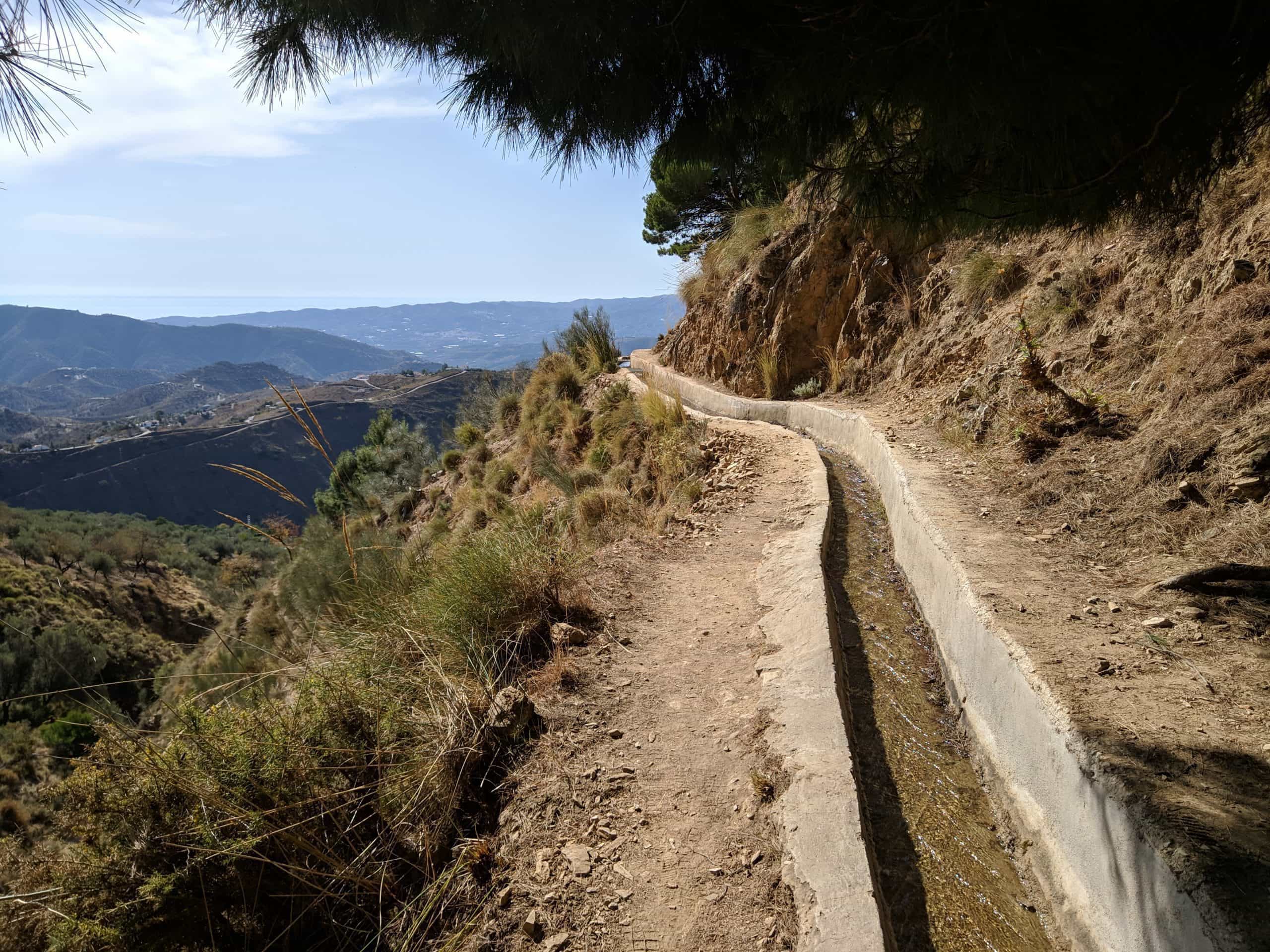 The distance to the first of the metal footbridges in El Saltillo is about 3 km. And then we continue along a steep path until it zigzags, but with large steps.

You will have to take into account that steep slope. Because those who want to return after reaching the bridge will have to face a hard climb, which requires some physical strength.

After the new suspension bridge the path continues towards the white village Sedella. This path for now also requires a new physical effort, as it is a rather steep and narrow slope. 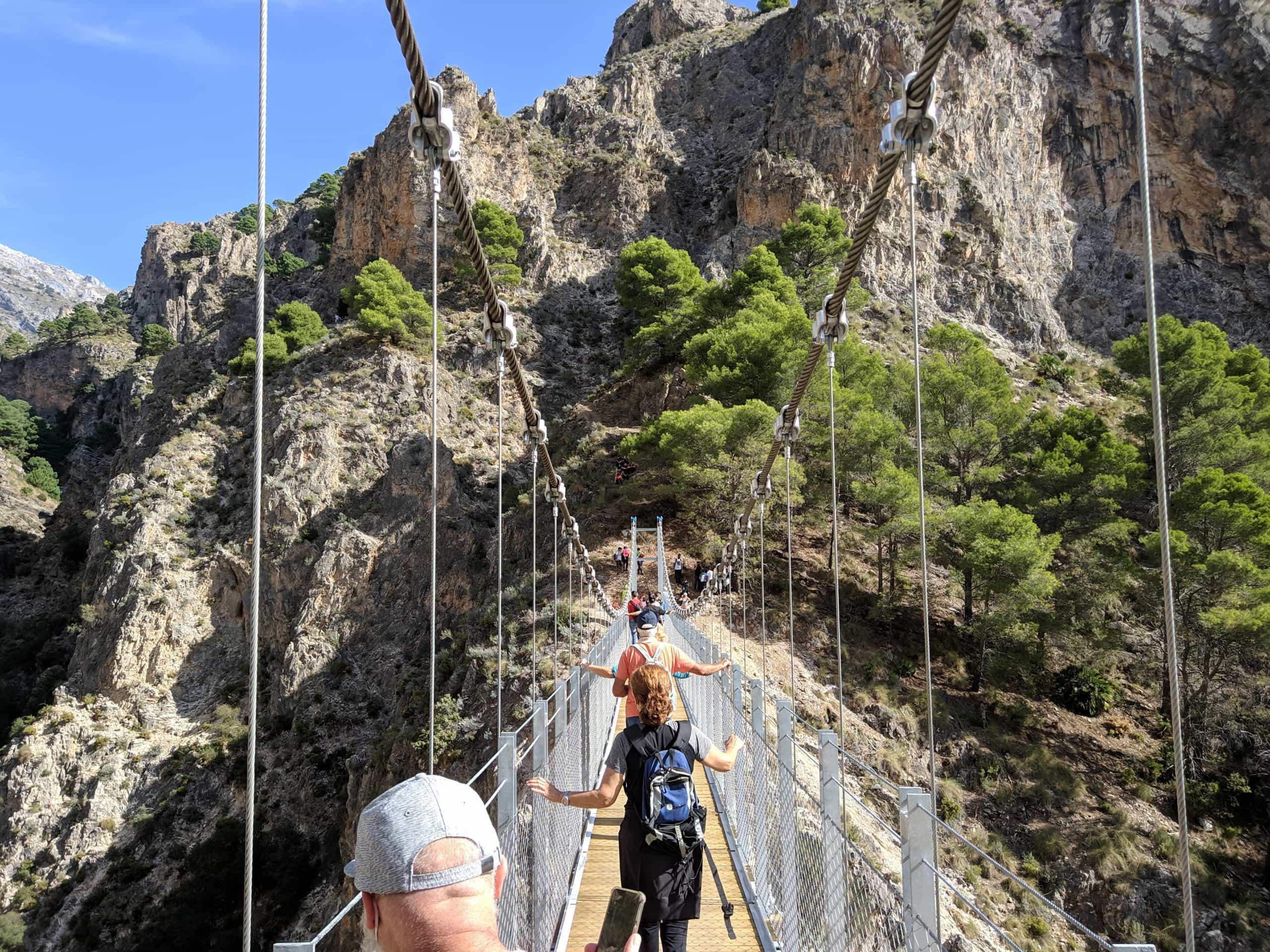 There is not only the value of this route from a sporting point of view. Being in the heart of the Sierra Tejeda, Almijara and Alhama Natural Park, you can discover the flora and fauna of the canyon of the Almanchares River.

What physical fitness does the route of El Saltillo require

To do this route it is essential to have some skill and good physical shape.

It is not suitable for people with vertigo. There are several stretches where you walk on the edge of the ravine. It is a medium-intensity mountain sport, with adrenaline and vertigo in a high-altitude experience. 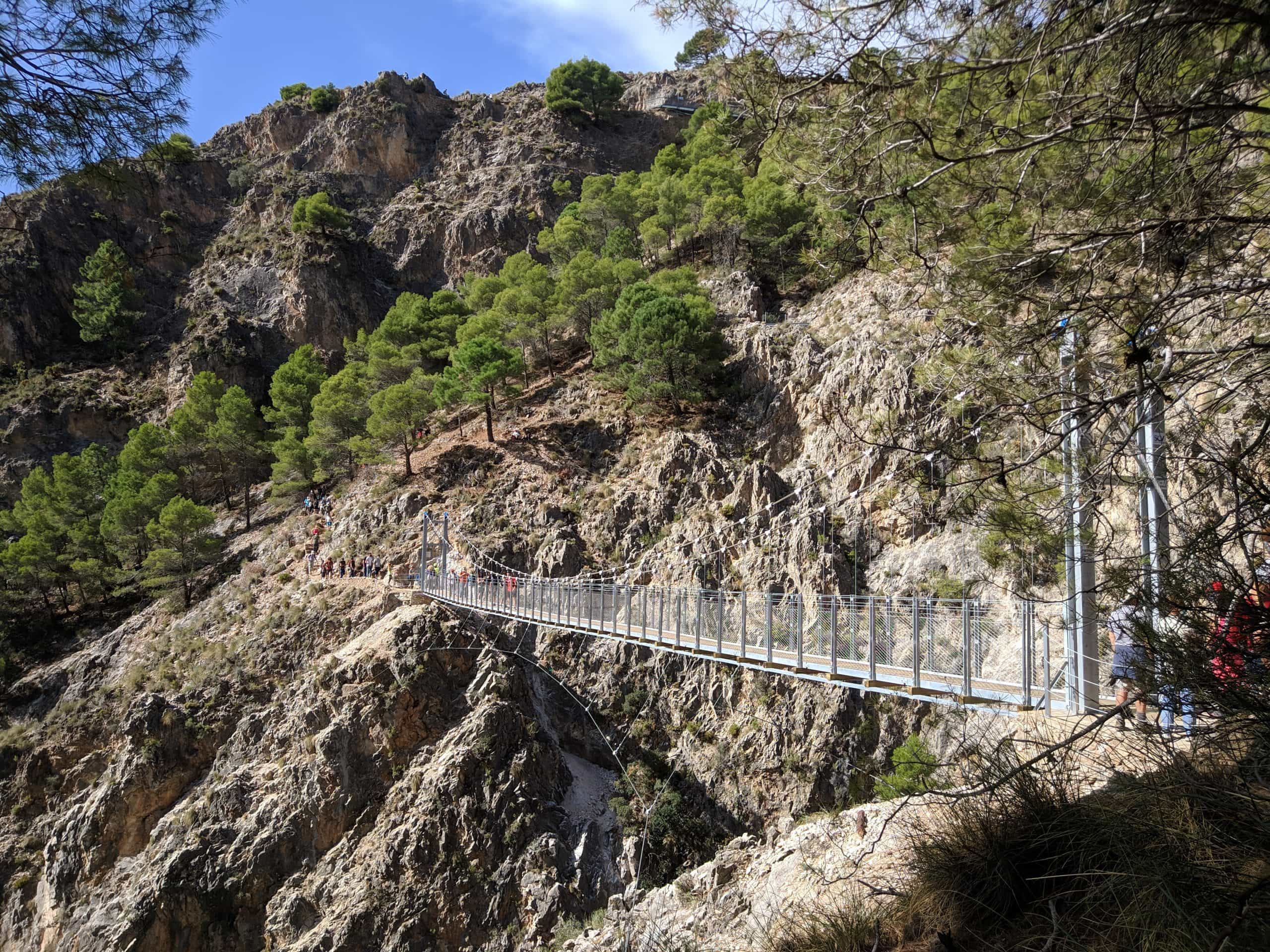 Now that the best season for hiking has begun, we can observe a certain massification of natural places. And especially of very popular places such as the Caminito del Rey or El Torcal. So, we advise you to do the routes during the week whenever you can. Thus you can avoid crowds of people and traffic jams in narrow places and with difficulty in manoeuvring.

For the route, in general when we are in a mountainous area: It is essential to wear suitable footwear, sun protection and a hat and carry at least a bottle of water. And some energy bars or nuts to replenish energy.

This white village of Arab origin with its narrow streets is located at an altitude of about 649 metres above sea level in the heart of the Sierra Tejeda, Almijara and Alhama Natural Park. It is crowned by the peak of La Maroma, of 2,068 metres, the highest in the province of Malaga.

Due to its geographical location, this village is a natural balcony of the Axarquía with impressive views to the coast. Canillas de Aceituno is famous for its gastronomy, especially the goat (chivo), a typical dish that has placed this small village as a reference.

How to get to Canillas de Aceituno 6 Useful Tricks to Avoid Theft at the Beach