Situated in the south of Spain, in the province of Granada. It’s a very popular place amongst the tourists that visit Malaga. Salobreña borders with Motril and Almuñecar, another two popular destinations amongst those who visit the Coast of Granada or the Costa del Sol.

Salobreña has had human presence there since the Neolithic period that has left us many archaeological findings, but it was as from the 13th century before our era when the Phoenicians appeared and a stable population nucleus; these settlements worked mainly in the agriculture and cattle farming, known back then as “Selambina”.

The romans invaded the Carthaginians’ area during the 2nd century before our era, and lived off the vines, olive trees, fishing and fish salting, known during this period as “Segalvina”.

During the Arab invasion, Salobreña passed on to be a village of great importance on the coast, passing on to be known as “Shalubanya” from which the current name originated. During this period its economy was mainly based on the sugarcane and legumes. 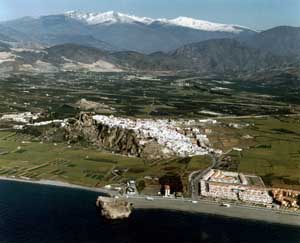 The end of the Muslim dominion arrived in 1489 when the Christians conquered Salobreña, repopulating the area and expelling the Moors after the revolt carried out all around Al-Andalus.

The castle of Salobreña, of Arab origin, continued to have special importance until the 18th century, suffering all kinds of reformations over the passage of time.

During the 20th century, the sugar industry re-emerged, that had gone down since the 18th century, and the village’s perimeter was extended, knocking down the old walls.

It was as from 1960 when the tourism began to gain importance and Salobreña expanded by building new residential and tourist areas. Today, the tourism is the main source of Salobreña’s economy.

With a Mediterranean climate and mild temperatures all year round, Salobreña is the ideal place to visit during our holidays in southern Spain. It also has several monuments and popular festivities that we’ll surely enjoy.

- Salobreña Castle:
It’s the most important monument in this locality and it dates back to the tenth century, probably built by the Arabs upon a previous Roman or Phoenician fortification. It currently joins the styles of Muslim and Christian architecture.

- The walk of the flowers

Places that are worth a visit:

- Viewpoint of the Walk of the Flowers

If you visit our province and you hire a car in Malaga, you may be interested in visiting Salobreña, which is situated approximately only an hour and a half away by car, 100 kilometres away from Malaga airport.

It’s a lovely journey by car bordering the southern coast of Spain. On the map below you can see the chosen route to get to Salobreña from Malaga.