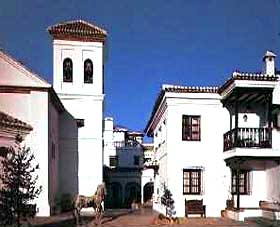 The town of Loja is located in the westernmost part of the province of Granada and borders with the provinces of Malaga and Cordoba. Among the highlights of the municipality is the glacial lake (also known as Charco del Negro) located in Sierra de Loja, its nature and its rich cultural heritage which will be discussed throughout this guide.

The name comes from Lauxa surely given in the past by the existence of stone quarries in Sierra de Loja and exploited by the Romans. Loja´s name comes from the time of Al-Andalus, during which the city reached great importance.

The earliest human remains found dating back more than 150,000 years ago and the first settlement of the Bronze Age, exactly beneath the neighbourhood of the Alcazaba. The Phoenicians would flourish the city thanks to its trade and culture.

During the Roman period the city was called Tricolia as it is situated between three hills. It was not until the arrival of the Arabs when Loja reached its true potential and eventually became a border city of strong strategic value until it was finally conquered by the Christians.

The great cultural legacy of Loja includes important buildings, including dishes and Arabic influences and festivals throughout the year.

La Alcazaba
Of Moorish origin built in the late ninth century on a rocky height which gave greater defensive advantage. It has been used throughout history as a residence, prison and barracks.

Bridge of Gran Capitan
Of Arab origin, it has undergone numerous reconstructions throughout history being the last one of 1520.

La Candelaria
This celebration is held every year on February 2nd night around bonfires.

San Marcos Day
During the April 25 each year families and neighbours of Loja gather in the countryside to eat and drink.

Small Fair
The first weekend in June takes place this fair which has its origin in ancient cattle fairs.

Big Fair
Loja Fair has its origin in the late seventeenth century and there are taking place many activities.

Hiking Trails in Loja
Sierra de Loja flatters with spectacular views anybody who decides to perform any of its hiking trails. One of these routes starts from the gas station you find on the motorway of Loja towards Granada, a route that has fossils and where you can even find remains of an anti-fascist guerrilla settlement of the Republican resistance of Malaga and Granada who fought against the putsch.

How to get to Loja

If you drive from Malaga to Loja take the direction north towards Casabermeja and Villanueva del Trabuco following the signs until finally you get to Loja.