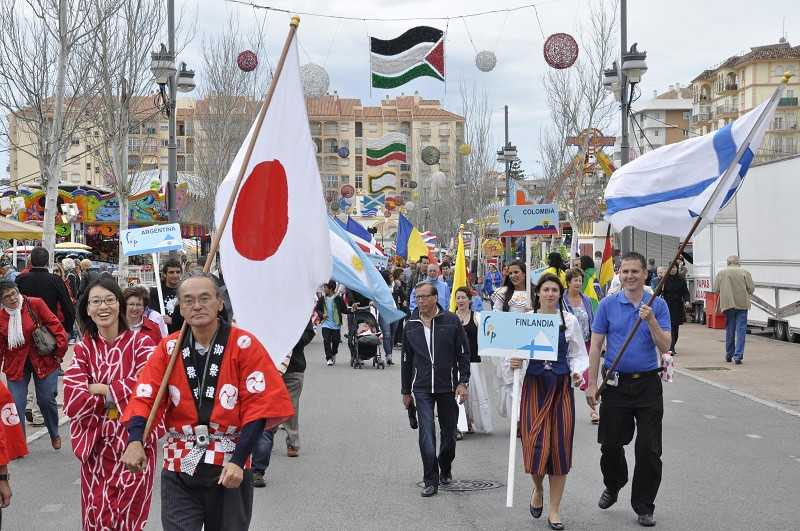 One of the great cultural events in Fuengirola is the International People´s Fair, which takes place every year for 6 days at the end of April and the first of May.

The International People’s Fair of Fuengirola, which this year celebrates its 25th anniversary, will be held at the Fairgrounds from Tuesday 30 April to Sunday 5 May 2019.

This very popular event celebrates the multiculturalism of this municipality of the Costa del Sol with more than 30 countries presenting their customs, traditions and gastronomy. The International Fair usually receives more than one million visitors each year.

You just have to approach the International People´s Fair, which is held at the Fairgrounds and be prepared to enjoy this great celebration of multiculturalism.

Every day there are live performances of the different groups on the stage of the Plaza de España and their respective booths. Free entrance.

The Parade of all nationalities (highly recommended!): The parade on 1st May of the participating folk groups, will follow the traditional route whose itinerary starts at 11:30 am at Plaza de España and continues on Avenida Condes de San Isidro, Avenida Matías Sáenz de Tejada, calle Alfonso XIII, Jesús Santos Rein and arrival at the Fairground.

How to get there: https://goo.gl/maps/A4gvwdibgrN2

Due to the large influx of visitors, we recommend using public transportation. The fairgrounds are located 10 to 15 minutes’ walk from the C-1 suburban train station and the bus station.

How to get there: https://goo.gl/maps/KwaWRWXt6DT2

Below the promotional video of the Town hall Fuengirola of the International People´s Fair in a previous edition.

Map with the location of the booths of the different countries that participate in the International People´s Fair Fuengirola 2019.

Are you going? Have you been there? Tell us! And don’t forget to book you car hire at Malaga airport with us.