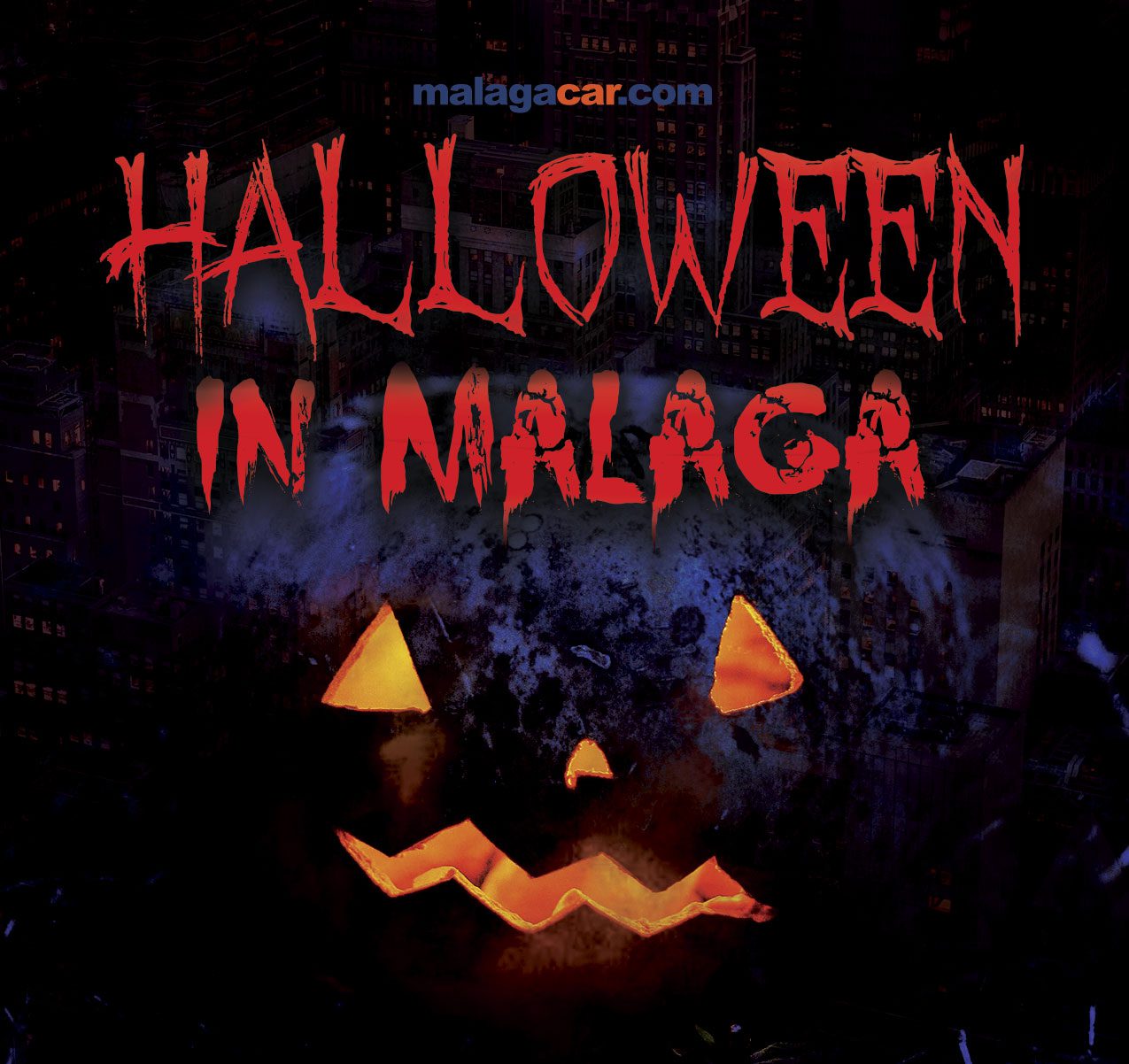 Although it is true that in general in Malaga people are always in the mood to celebrate, one thing is quite certain: Malagueños love to celebrate Halloween in Malaga big style. 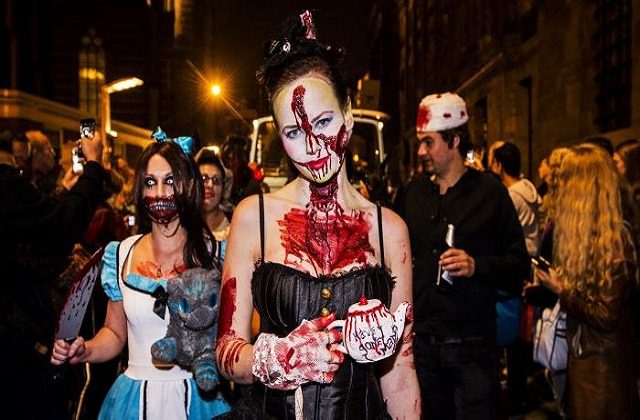 You are in the province and you want to participate but you don´t know where to go or what to wear?

Here’s a quick guide to events and shops where you can buy a creepy costume.

Where I can buy my dreadful attire to celebrate Halloween in Malaga?

Now that I am dressed for the occasion, where do I find terrifying events?

Malaga city centre is full of creepy creatures. Just head for calle Larios, there you will find plenty of them! 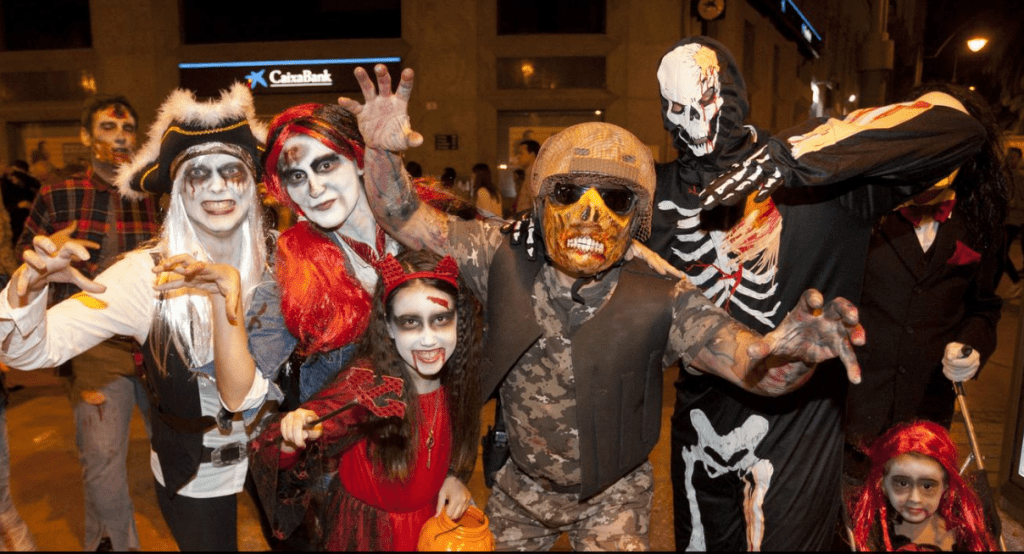 Night in Black – To be confirmed

Come and join the great Halloween children’s party in Soho from 5:30 pm until 9:30 pm.

There will be face-painting, children’s activities, and games and dances, as well as a costume contest. With a sweet route through Soho shops and a contest to the best showcase where you will be the jury, you can win great prizes.

How to get there: https://goo.gl/maps/npcTi9LBMaB2

Port of Malaga, Pier One – Halloween for Kids 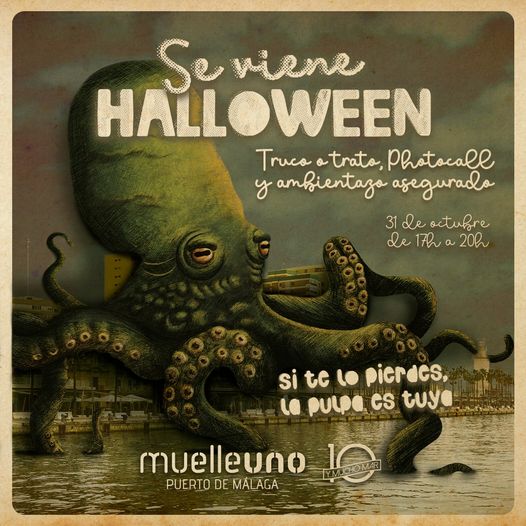 Halloween activities at Pier One are always a hit, especially for families living in the area. But it’s also worth coming to this beautiful maritime enclave next to the old town centre for a stroll and a drink.

Halloween kicks off at Muelle Uno on 31 October at 5 pm in the Plaza de las Palmeras with a party for Witches with a costume catwalk, games, live music and lots of surprises, don’t miss it, fun guaranteed!

How to get there: https://goo.gl/maps/iQzMRKaAmUdjm4m78 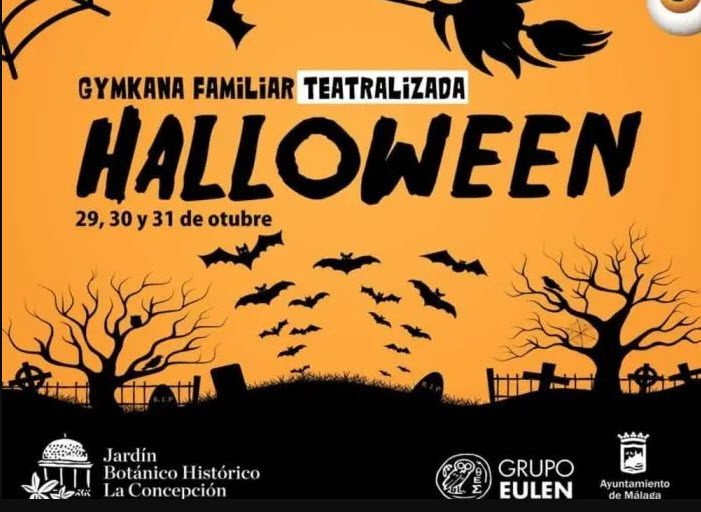 The Historical Botanical Garden La Concepción will be holding a treasure hunt for children on 29, 30 and 31 October at 11 am. It lasts approximately 2 hours and is suitable for the whole family. Prices are €9/adult and €6.90/children.

There is also a night-time tour for adults, where La Concepción becomes an abandoned boarding school from which some of its former pupils try to escape from a terrifying past. There are several shifts available from 7 pm, and the tour lasts approximately one hour. Admission 17 €.

How to get there: https://goo.gl/maps/xfEnh6PmPio8Yms66 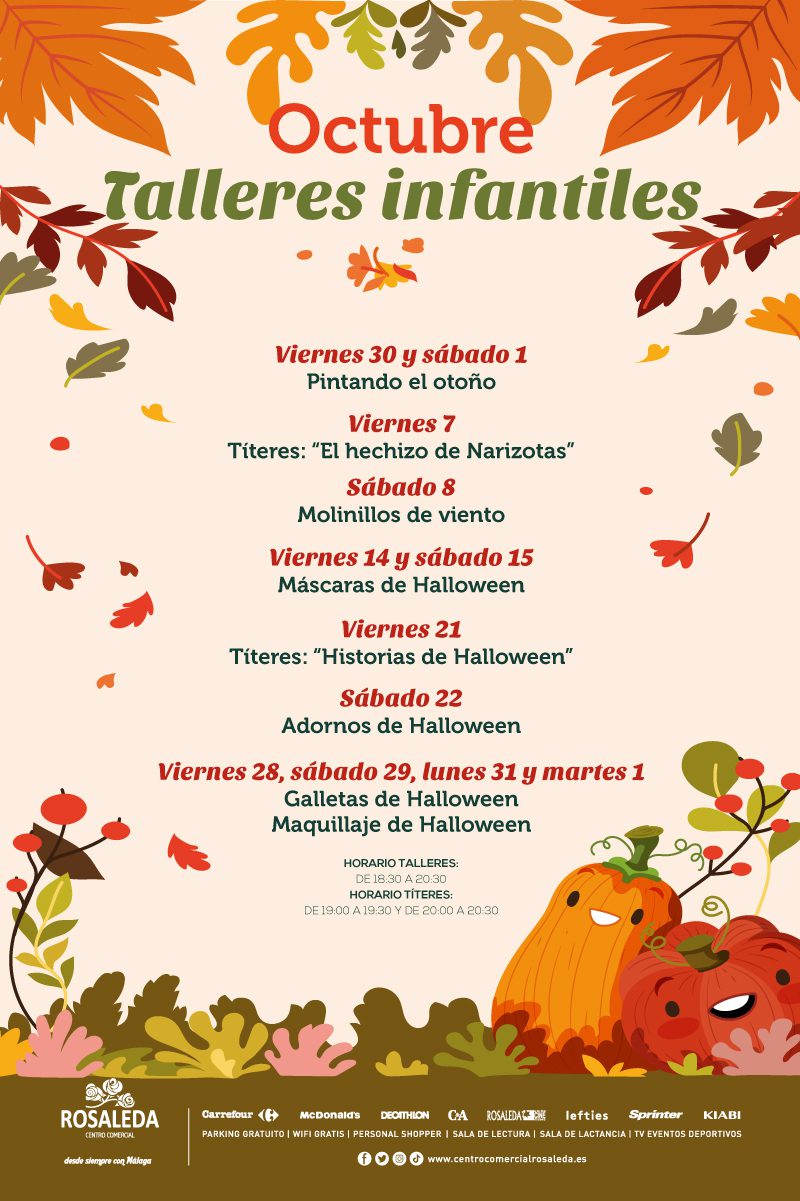 During the whole month of October there will be free activities for children from 4 years old on Fridays and Saturdays. In addition, there is a special celebration on October 31st and November 1st for Halloween.

How to get there: https://goo.gl/maps/GUXggViBozjNT5Yy5

Gymkhana at night in the English Cemetery

Soon we will know if also this year the English Cemetery will organise its night Gymkhana – from 10 years old – to discover all the mysteries hidden in the place. It is necessary to register in teams of 4 to 6 people and the price per team is 25€.

The activity will last approximately an hour and a half, and there will be three sessions: one at 7.30pm, another at 9pm and the last one at 10.30pm.

How to get there: https://goo.gl/maps/kMRuhExiEZjhRAn96 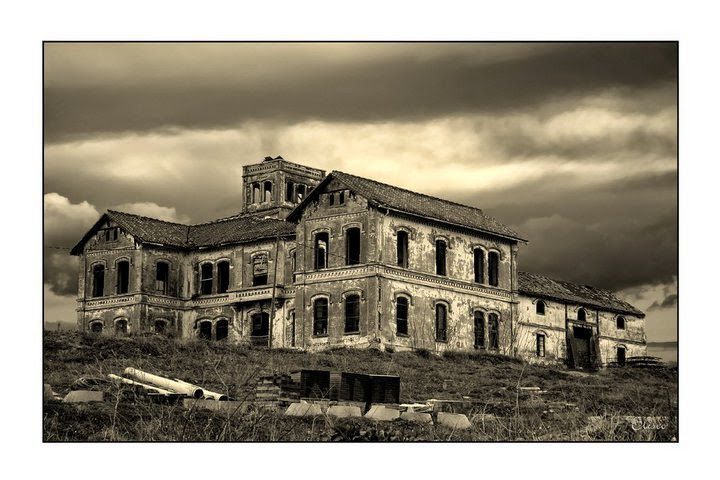 We still don´t know if also this year there will be a night visit to Cortijo Jurado, the most famous haunted house in Spain, organised by Rutas Misteriosas de Málaga, where they will explain to the public all the terrifying legends of this 19th century building and “parapsychological” experiences, always from the main courtyard. The activity, priced at 18 euros, lasts an hour and a half, with a shift at 8 pm, 10 pm and 11:59 pm.

More info and bookings at https://rutasmisteriosas.es/reservar/halloween-cortijo-jurado/
How to get there: https://goo.gl/maps/eJgTAi2X6QbEm6KT6 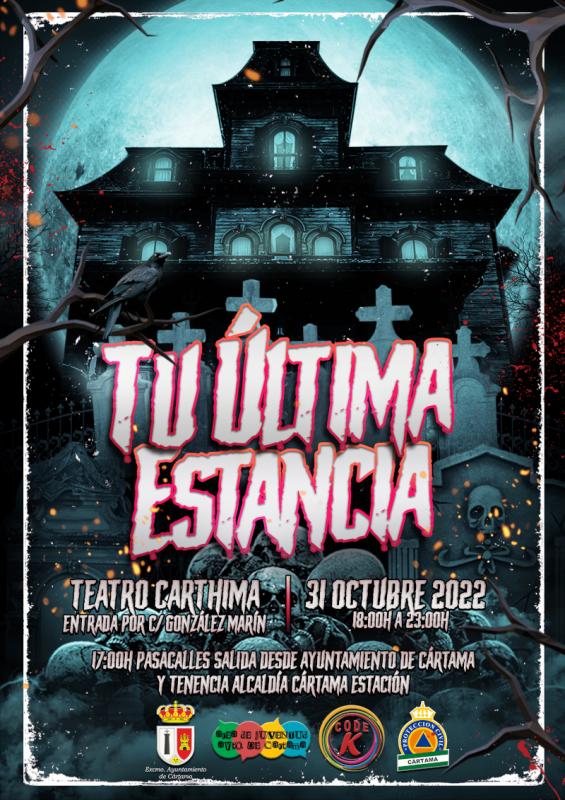 In the municipal theatre there will be a house of Horror called ” Your final resting place” from 6 pm onwards.

How to get there: https://goo.gl/maps/jJzeQNHFyerdzyMQA

Ronda has prepared for this Halloween numerous activities that will take place on Sunday 30 and Monday 31 October.

On Sunday 30th October there will be a big children’s party at Plaza Teniente Arce from 11.30 am to 2.30 pm with inflatables, children’s workshops, singing games and more.

On Monday 31 October there will be a Passage of Terror in the Convent of Santo Domingo from 7 pm. Tickets, which cost one euro, can be purchased at www.giglon.com.

How to get there: https://goo.gl/maps/7xFbwvhtt2Ee7vdr9 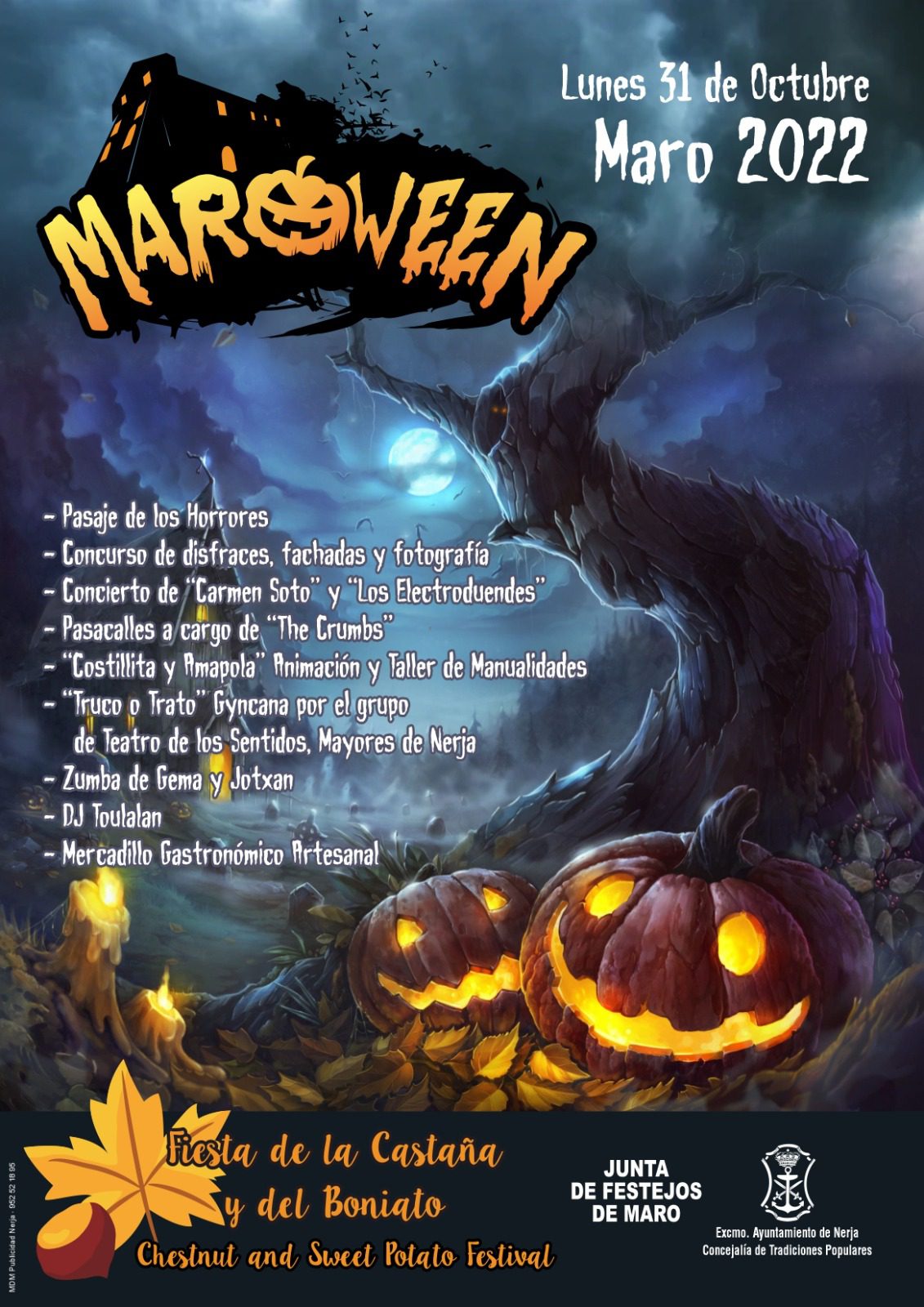 Another year the fun party of Maroween awaits us in this small village very close to Nerja. It combines the Celtic tradition with the Andalusian tradition of roasting chestnuts and sweet potatoes.

In addition, there are lots of spooky activities at Plaza de Maro from 5 pm onwards.

There will be a craft and food market in the Calle Real and a craft workshop in the church square, a children’s show, a passage of horror and a terrifying parade.
From 7 pm onwards there will be chestnut and sweet potato tasting and lots of music.

There will be a shuttle bus service Nerja – Maro – Nerja from 5 pm until 2 am. The stops will be the city bus stops and in Maro at the entrance to the village.

How to get there: https://goo.gl/maps/wbvqWX2nHZ8kuvpW7 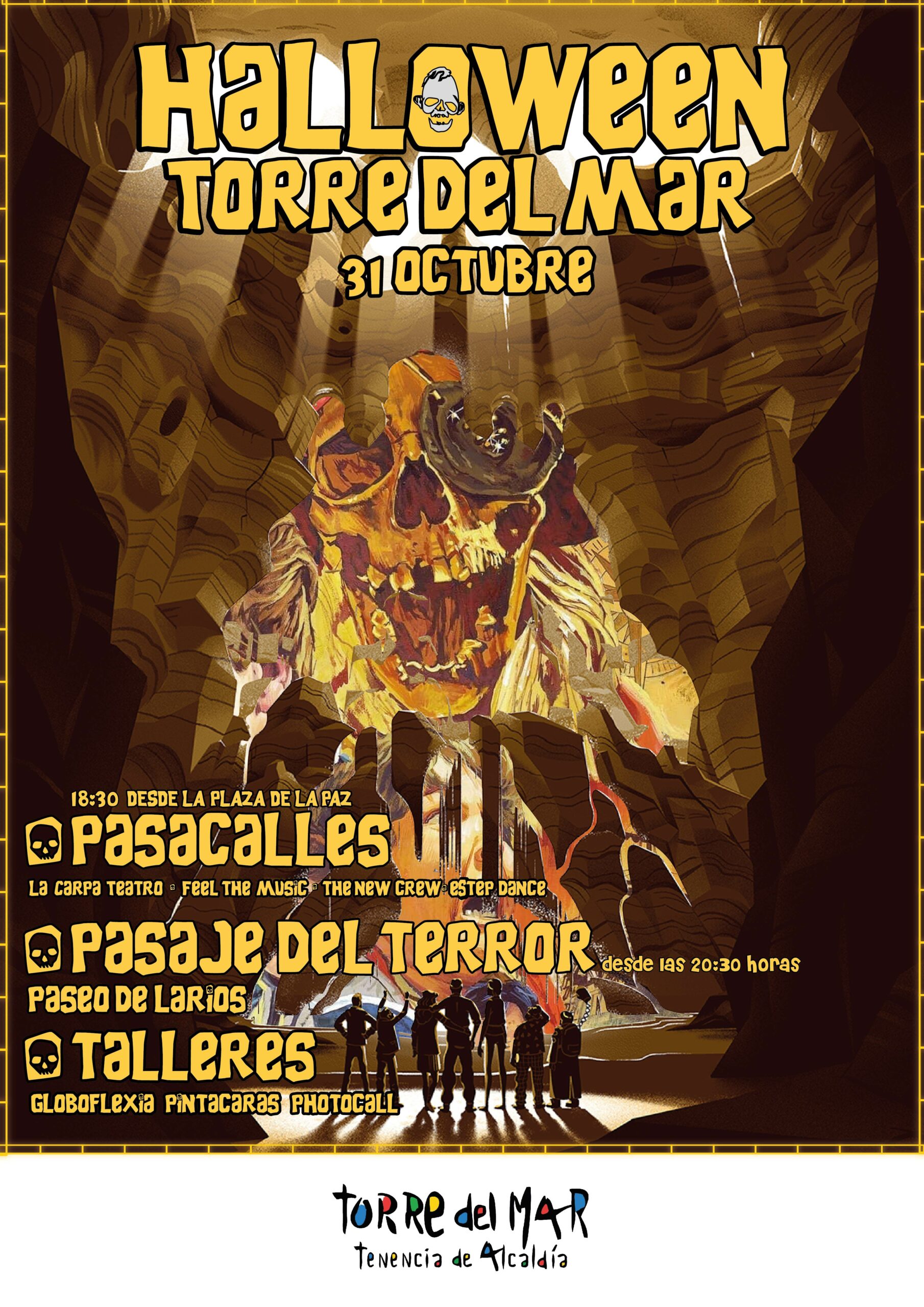 And last but not least, in Paseo de Larios there will be a Photocall, as well as children’s workshops with balloon twisting and face painting.

How to get there: https://goo.gl/maps/6kWxQ1D2sp3tjnAz9 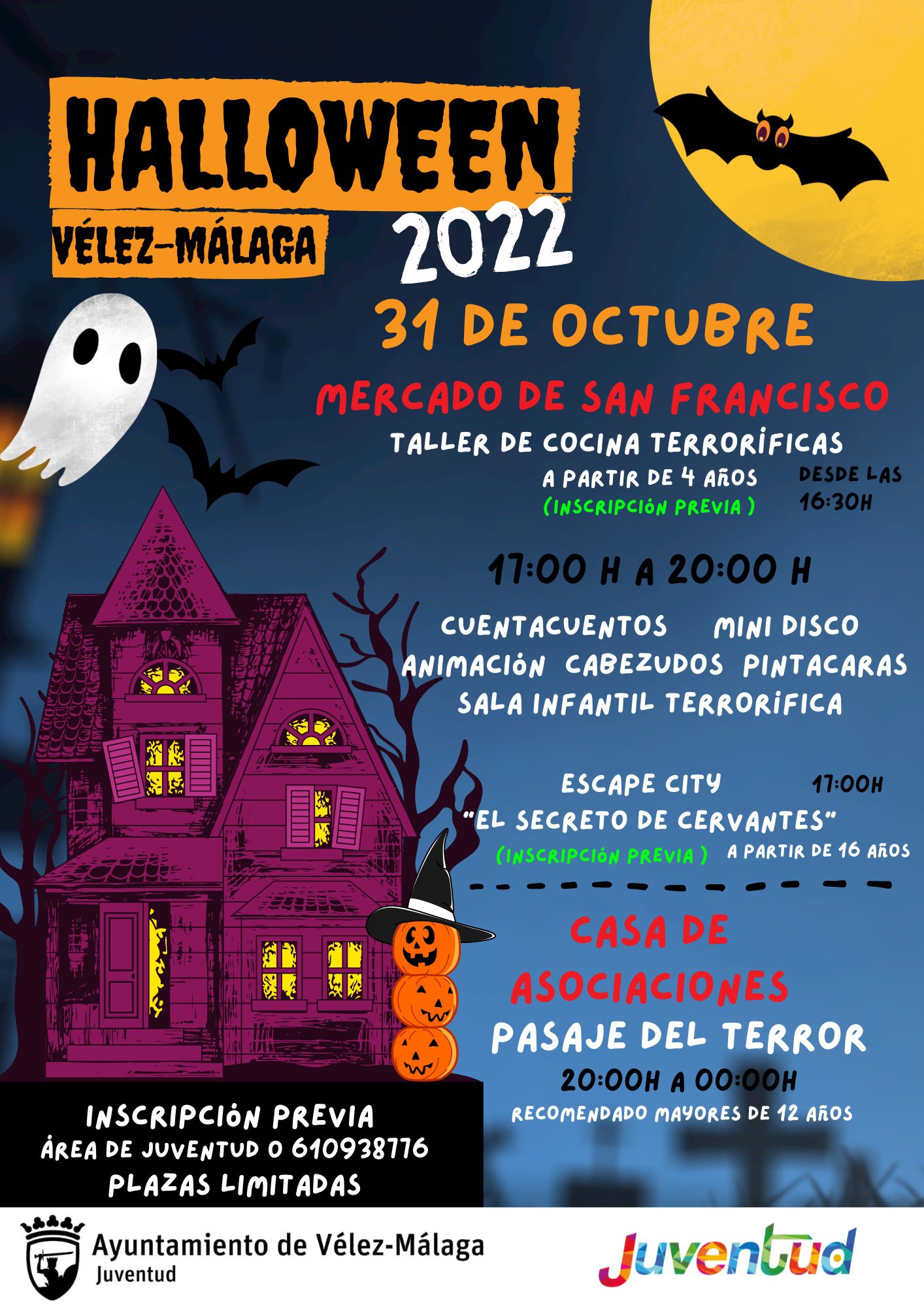 In the Casa de Asociaciones ‘Manuel Berenguer’, there will be a horror show from 8 pm to midnight for children over 12 years old.

And last but not least, there will be an Escape City ‘The Secret of Cervantes’, for the over 12s, starting at the San Francisco Market and taking place in the streets of the historic centre. Registration for this activity is required by calling 610 938 776.

How to get there: https://goo.gl/maps/Am264ntYZFtV9WT4A

This year we can only guess what is in store for us in this horror village, which is one of the most atmospheric and popular in the province.

The Las Pedrizas neighbourhood will be completely transformed into a Horror Village. Its narrow, winding streets will be renamed Nightmare Street, Coven Street, Torture Street, etc. and will be decorated and inhabited according to their terrifying name from 7 pm until 11 pm.

How to get there: https://goo.gl/maps/VQVwiJ83vHvcPXmg6 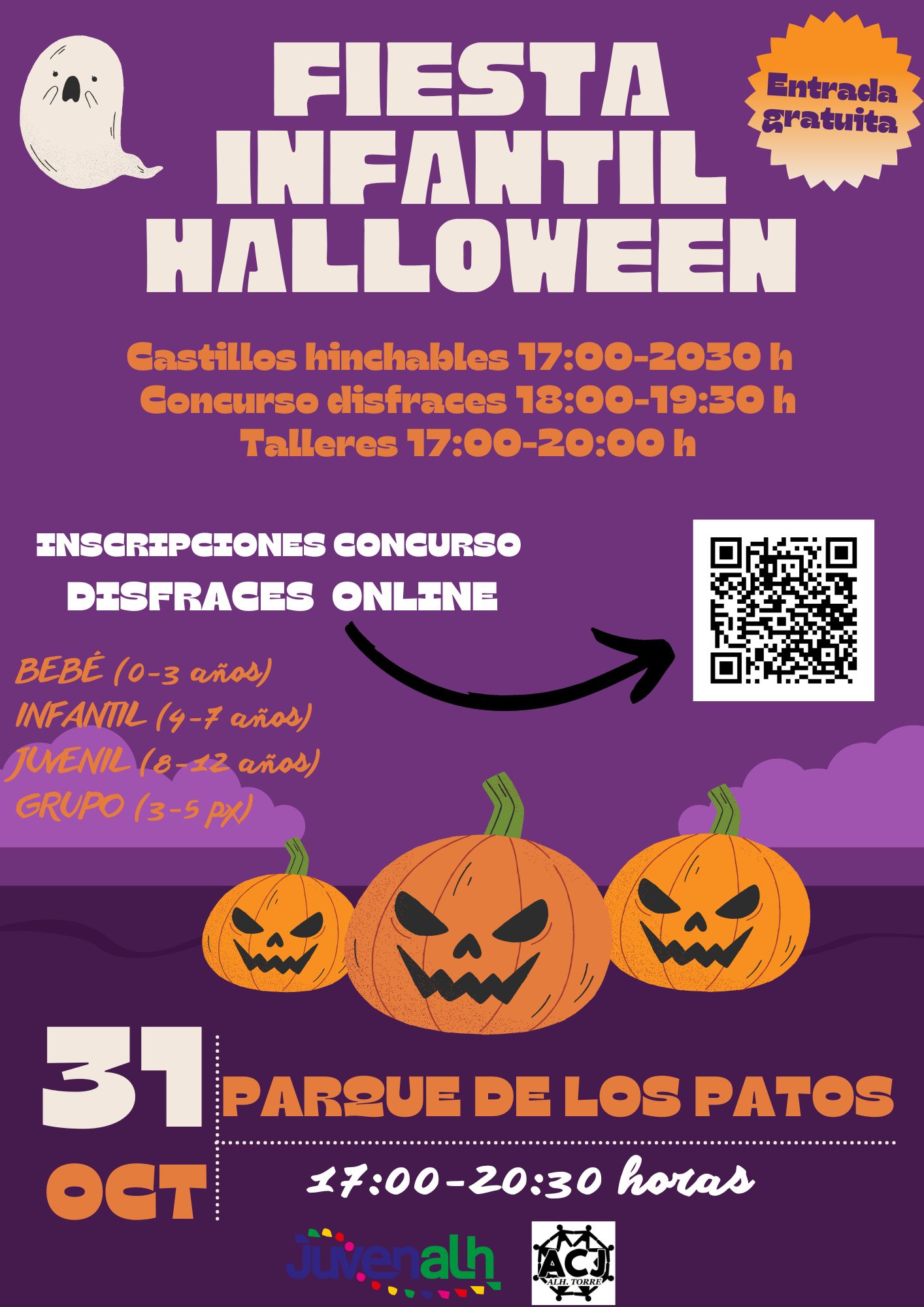 The Halloween party in Alhaurín de la Torre has several activities differentiated by spaces and ages.

There is a big children’s party in the Parque de los Patos from 5 pm to 8:30 pm with bouncy castles, workshops and costume contests. Registration only online via the QR code on the poster.

A house of terror will be set up in the Casa de la Juventud from 8:30 pm to midnight.

How to get there: https://goo.gl/maps/Am264ntYZFtV9WT4A 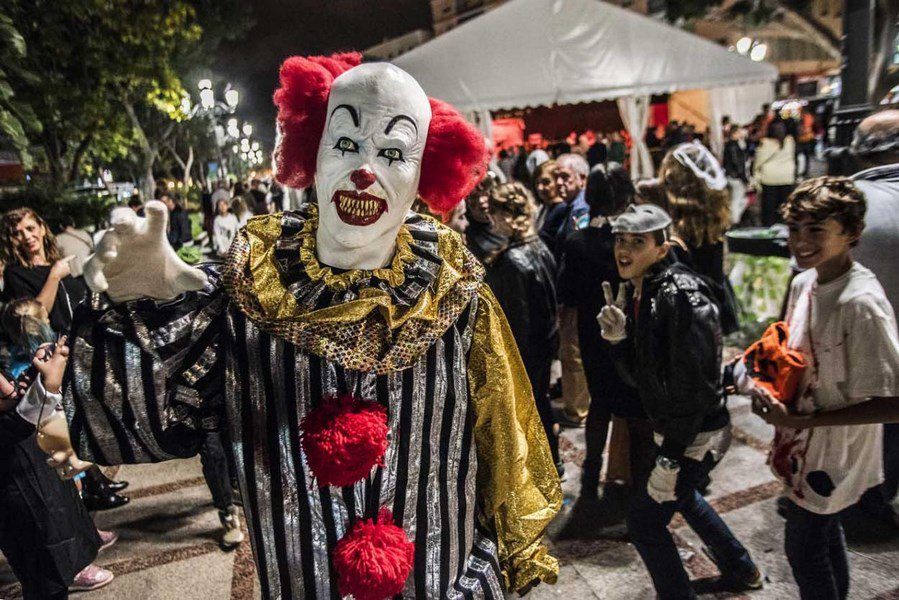 In Torremolinos there will be a Halloween party on Saturday 29th October at Parque de la Batería from 6pm.

There will be a Horror Passage for all ages, children’s workshops, bouncy castles, scary make-up workshops and live music. This year there will also be some foodtrucks, fritter and candyfloss stalls.

On the 31st there will be a Zombie Escape Game at the Pablo Ruiz Picasso Cultural Centre, with two sessions at 7 pm and 9:30 pm. The Escape Game is for ages 13 and upwards and is played in teams of 3 to 6 players. Registrations should be made by email to info@escapevent.com, indicating name and surname and a mobile phone with whatsapp. 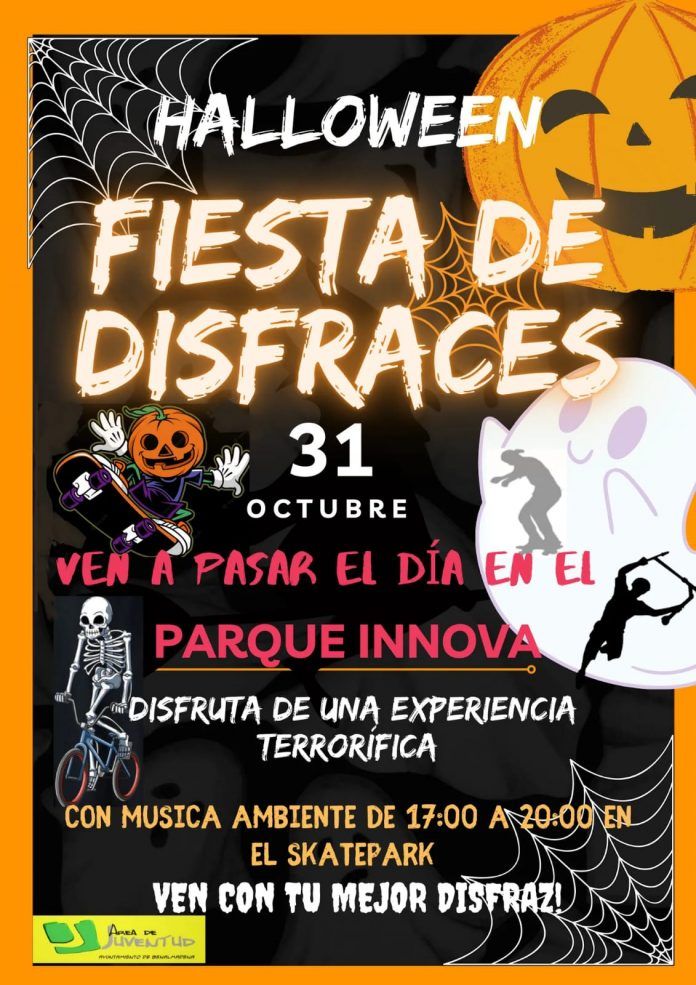 Benalmadena this year celebrates Halloween in the Innova Park from 5 pm to 8 pm for all the family.

There will be live music, a smoke machine to create a Halloween atmosphere and a fancy-dress competition.

How to get there: https://goo.gl/maps/xAjRhXP1uQsydsMEA 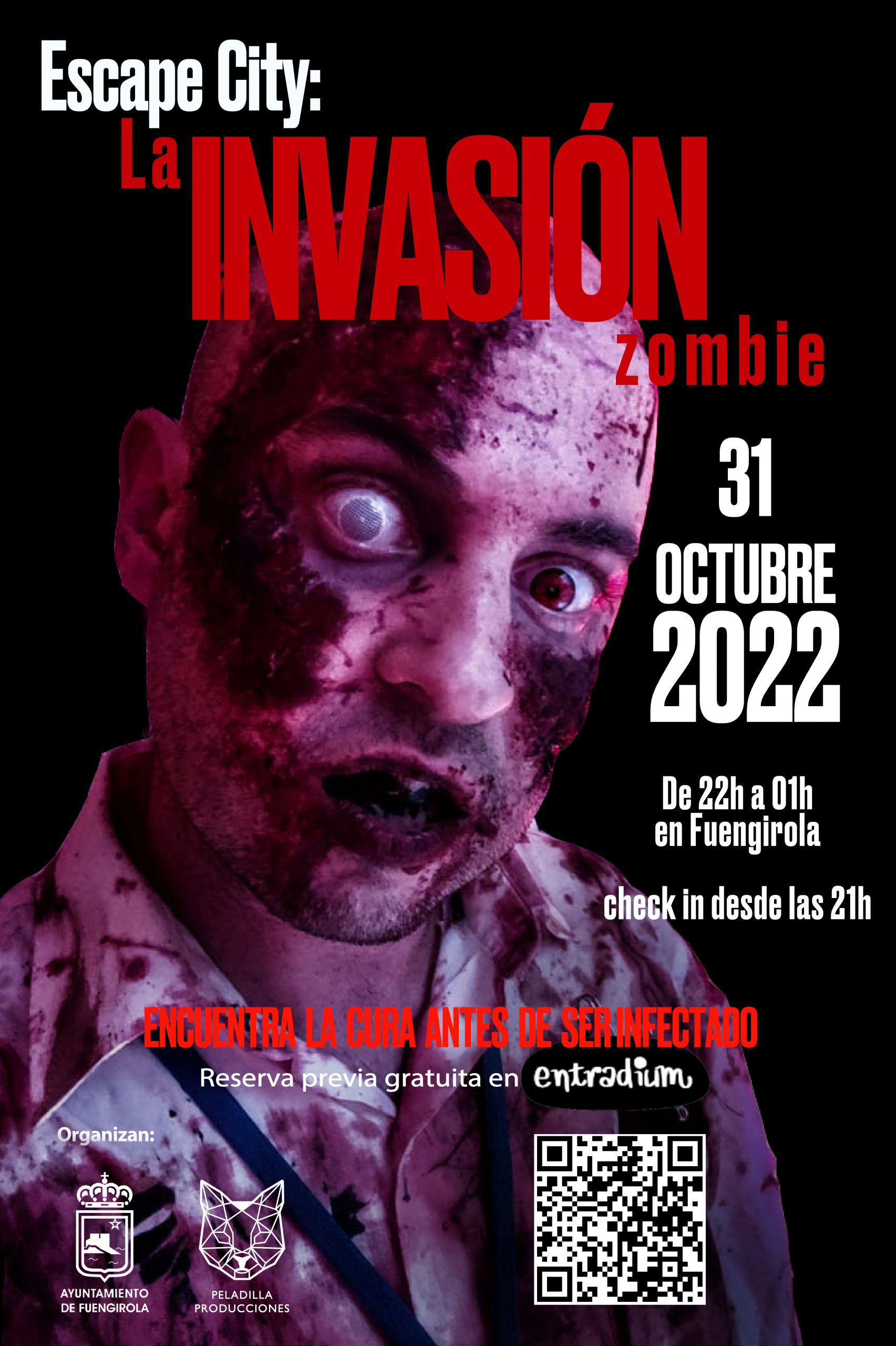 Fuengirola will celebrate Halloween with a big party at Plaza de España. There will be theatre, magic, workshops, musical entertainment and a big Passage of Terror from 6 pm to midnight.

In addition, for the over 12s, there is a Zombie Invasion that will take place in the town centre from 10 pm until 1 am. It is a free dramatised Escape City, where participants have to overcome different tests. You have to register through the entradium.com platform, the entrance is free. https://entradium.com/es/events/escape-city-la-invasion-zombie

How to get there: https://goo.gl/maps/EmteZd2X6xTnwbXm6

We are awaiting confirmation of this year’s activities. 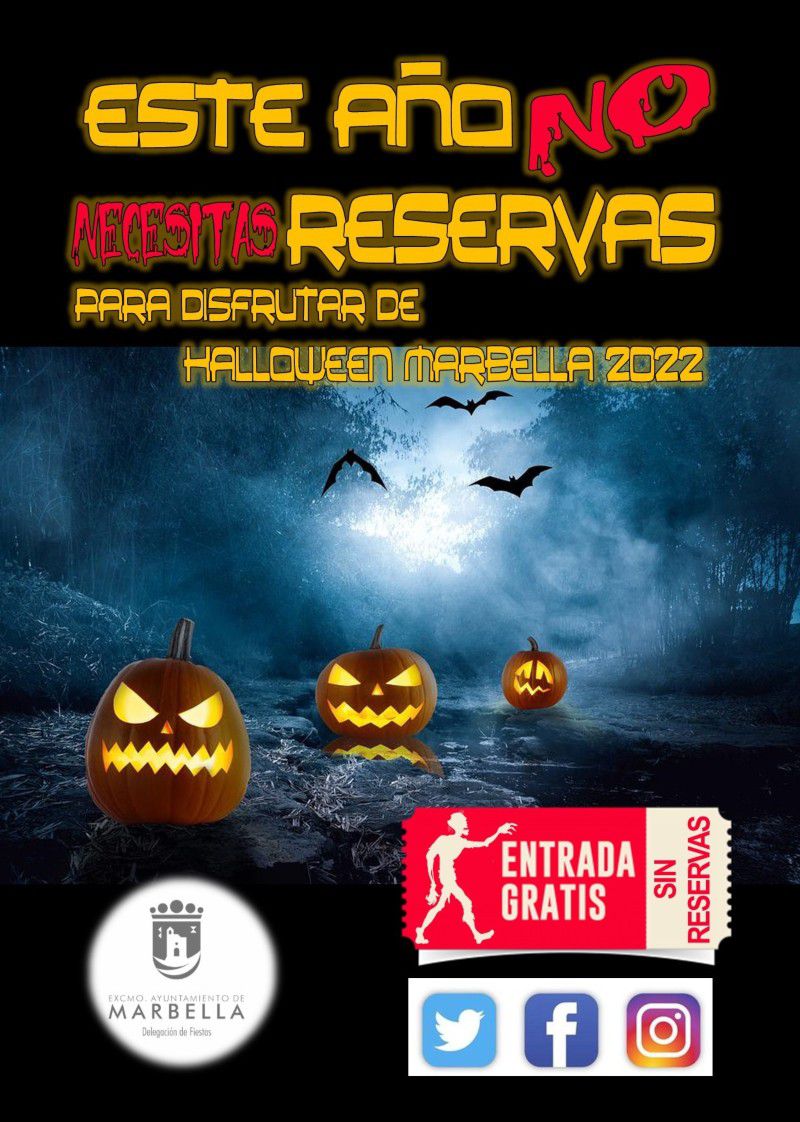 Marbella will once again celebrate Halloween in the Parque de la Represa, where a large “Haunted Park” will be set up.

There you will be able to enjoy two passages of terror, a Halloween train, a ‘laser combat’, a ghost bus, a living cemetery or a game of zombie hunters for the older ones, while the children’s area will have themed attractions such as the boat ride, trampolines, ‘jumping’, or the maze of the children’s minotaur.

Some activities are also announced on Nabeul Avenue in the centre.

How to get to Parque de la Represa: https://goo.gl/maps/WLdH3yhTcdVky4dK9 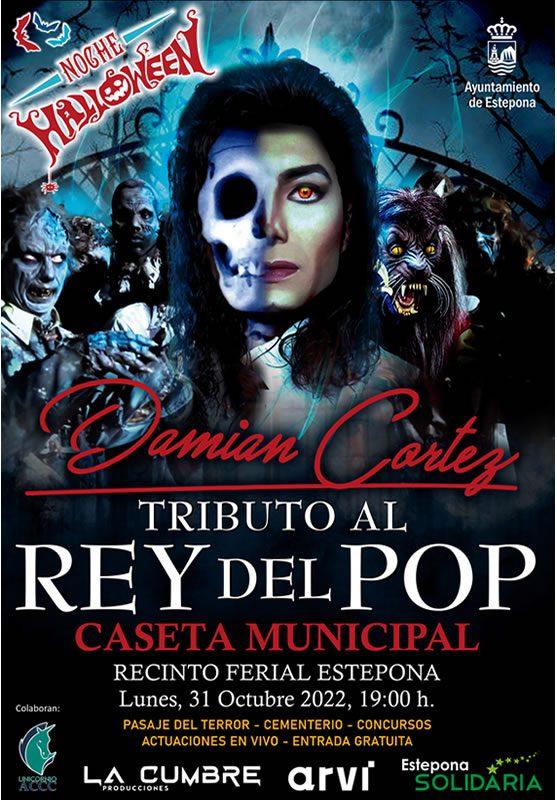 This year’s Halloween party in Estepona pays tribute to the 40th anniversary of Michael Jackson’s ‘Thriller’ album. There will be live performances, a Passage of Terror and other spooky surprises.

When and where: Caseta Municipal del Parque Ferial, from 7 pm to midnight.

How to get there: https://goo.gl/maps/3zcYBrEqB4HkxSnT7

This small town merges the local custom of roasting chestnuts and sweet potatoes with the Anglo-Saxon tradition of Halloween: A  full terrifying program with great gastronomy.

The activities of this traditional Chestnut and Boniato Festival will begin at 5:00 pm on  October 31 with the traditional crafts and gastronomy market in Calle Real. There is also a parade, a terrifying makeup workshop and a children’s Halloween show.

At 7 pm there will be handed out the traditional roasted chestnuts and sweet potatoes. And from 8 pm will take place in the Multi-Purpose Hall of Maro the Passage of the Horrors.
A shuttle bus service Nerja – Maro – Nerja will be available from 5 pm until 2 am. The stops will be those of urban bus and in Maro in the entrance to the town.

Program to be confirmed.

How to get there: https://goo.gl/maps/dS65wqzStZG2

At Larios Centro in Malaga there is face painting and photocall.

Miramar in Fuengirola offers a costume contest, decoration of balloons and distribution of Dracula candies and a workshop for terror makeup.

You want to dance? Expect a great night at numerous clubs throughout the Costa dreadfully decorated for the occasion. 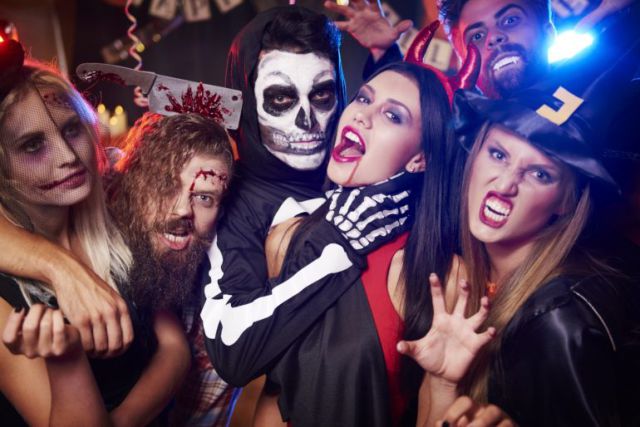 Are your ready for the most frightening night of the year? Click here to book your car hire with MalagaCar.com.