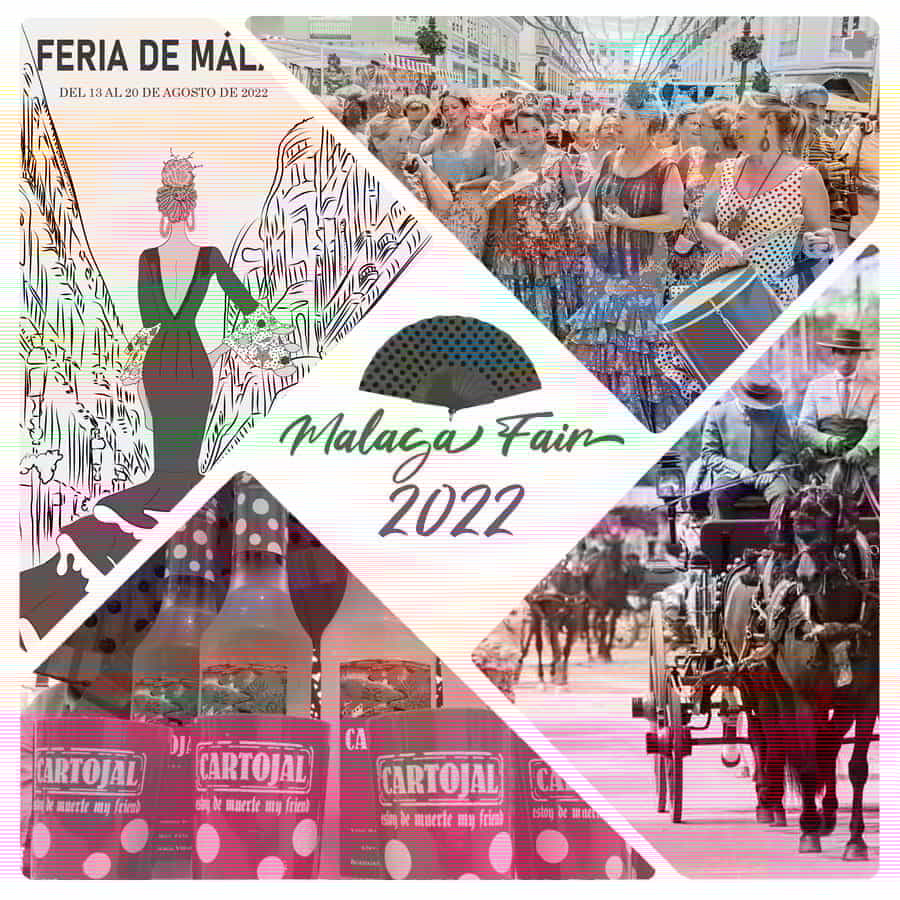 The Malaga Fair is one of the liveliest and most popular fairs in Andalusia and attracts every year a large number of local and foreign visitors who enjoy lots of music, dancing and cold Cartojal to combat the high temperatures.

It takes place during the day in the streets of the historic centre and then moves at night to the fairgrounds where people continue to party until dawn.

After two years without being held due to the pandemic, the Malaga Fair 2022 officially begins with fireworks at midnight on Friday 12th to Saturday 13th August.

It is always a very intense week during which the city celebrates the most important festival of the summer. In fact, it is together with the Seville fair the most important fair in Andalusia which attracts more than one million visitors every year.

And we are probably right in saying that this year will be exceptional: Nobody lacks the desire to celebrate and have a good time!

In other words, a massive turnout is expected during the festivities.

The kick-off takes place on Friday night at the Malagueta Beach. Thousands of people flock to this popular beach to see the fireworks that start the Malaga fair.

From then on, you have a whole week ahead of you to enjoy yourself to the fullest and live an unforgettable experience.

Where does the Malaga Fair 2022 take place?

A special feature of the Malaga Fair is also that you can choose between the day fair in the historic centre and the fairgrounds from noon to 6 am, with very different atmospheres. We tell you about it below.

The Malaga Fair is held during the day in the historic centre until 6 pm and at night in the Cortijo de Torres fairgrounds. The fairground is also the setting for the traditional horse and carriage parade.

At the Fair in the centre during the day – Plaza de la Constitución, Calle Larios and various streets of the historic centre – the main protagonists are the traditional dances and songs.

There is a spectacular atmosphere of thousands of people dancing and having fun in the streets. The typical drink is Vino Cartojal which is served chilled.

Every day live performances take place in four central squares of the city: Plaza de la Constitución, Plaza de la Merced and Plaza de las Flores. There is music for all tastes, as the concerts cover a wide variety of musical styles.

Here the fun starts from 12 noon until 6 pm.

Be warned: The daytime fair doesn’t stop even in the worst heat. Most of the concerts take place between 4 pm and 6 pm, i.e. at an average temperature of 30ºC.

So, you have to cool down no matter what. Classically at the fair in Malaga, this is done with a cold Cartojal. It is a sweet wine with denomination of origin of Malaga. And then the inevitable happens: The combination of heat and Cartojal cheers up even a dead man.

In the fairgrounds Cortijo de Torres, known by the locals as ‘El Real’, the horses, the “casetas” (stalls), more music and dancing take centre stage. Of course there are also the typical fairground attractions from midday and throughout the night until dawn.

There are almost 250 booths (where you can eat, drink and dance). The entry is free of charge.

These booths offer something for all tastes: family, youth, children’s, and senior citizen booths; more party-oriented booths or more traditional ones. There are even air-conditioned casetas.

Furthermore take place concerts every night in the open-air auditorium.

The fairground has a huge parking area for more than 15,000 vehicles.

Tips for going to the Fair

To make the most of this experience, here are a few essential ideas.

Typical things to do and see

You can also try “Rebujito” (a mixture of manzanilla wine and lime).

Dance in the Plaza de la Constitución during the concerts.

Go for tapas in the city centre.

Buy a biznaga. The biznaga is a beautiful sprig of thistle and fresh jasmine flowers. It´s scent is divine.

Must-haves: A fan will help you fight the heat. A flower in your hair.

A glass for the Cartojal. Many people hang it on a string around their necks.

Cartojal is a delicious sweet, fresh and tasty wine, made with grapes of the Muscat of Alexandria variety. It is the typical wine of the Malaga Fair and it is recommended to be served at 6ºC – 8ºC temperature.

It is made by Bodegas Malaga Virgen, and is produced in the Axarquia region, in the Finca Vista Hermosa (Fuente Piedra) and if you like it, you can buy it all year round.

If you go to the day fair in the centre, we strongly recommend you to use public transport. In the centre there are several areas closed to traffic every day of the fair between 12 and 6 pm.

Getting to the Fair

To get to the Fair during the day you can easily take the C-1 commuter train to Malaga city centre.

To get to the fairgrounds, there are buses throughout the night, such as line F from the centre of Malaga.

If you go by car, there is ample parking at the fairgrounds.

How to get there: https://goo.gl/maps/vMhHW9ftPEkhoDcc9

Best places to watch the fireworks at the Malaga Fair 2022

Whoever walks up to the Parador on Mount Gibralfaro will have a privileged view over the whole city, although not a solitary one, as this place is one of the most frequented points in the city to see the fireworks.

The Palm Grove and Pier One

Its proximity to the place from where the fireworks are launched makes the port a place chosen by many to see them without missing any of the details. One of the drawbacks is that you have to stand.

The hill south of the Alcazaba has similar views at a lower altitude than Gibralfaro and has the convenience of being closer to the centre and the fireworks.

This is where the opening concerts usually take place after the fireworks display. It is a very popular place, especially with young people.

From this spot you can see the fireworks as well as from the port or the Misericordia beach, but here you can also enjoy beautiful views of the city at night.

This is one of the least frequent but most attractive possibilities. If you have the chance to go on board that night, don’t hesitate. You will be one of the privileged few to see the fireworks from another perspective.

One of the most popular places are the roof top terraces of hotels in the centre of Malaga, such as the Hotel AC Malaga Palacio, the Hotel Valeria and the Hotel Larios Room Mate.

Malaga Summer Feeling
Things to do in Malaga in August 2022 Halloween in Malaga 2022 – Everything you need to know