Flamenco singing, also called grand or deep singing, os the most characteristic folkloristic manifestation in Andalusia. It is also the essential complement to any festive event. It is accompanied by guitars, hand clapping, or dancing. There are a variety of styles, known as palos, depending upon geopgraphy or schools. The best wayof getting to know the Gypsy bulerías and soleares, the fandangos from Huelva, the verdiales of Malaga, or the alegrías and tanguillos of Cadiz, is to attend a show at a tablao, a peña or association, or one of the many festivals which are held throughout the region.

Flamenco is mistakenly attributed by many to a single culture, when in fact it is the result of the fusion of different cultures over the centuries and with varied ramifications. From Greeks to Romans, Phoenicians and even Iberians, all contributed to the rich artistic culture that we find in Andalusia. 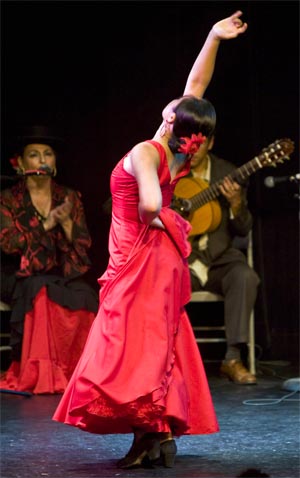 During May and June Granada hosts the oldest flamenco festival in Andalusia, which have boasted performances by artists like Federico García Lorca, the poet, and Manuel de Falla, the musician, during the twenties. The capital is home to the Gypsy caves at Sacromonte, one of the most important flamenco centres. In Malaga, the cheerful verdiales, which are danced to with castanets and accompanied by violins, guitars and cymbals, can be heard during various dates on the Malagan calendar as well as the Fiesta de los Verdiales of Malaga.

The contests held on the Costa del Sol, at towns of Estepona, Fuengirola and Rincon de la Victoria, bring together the area's best aficionados. The province of Jaen is known for the Tarantas contests of Linares and the cante libre in Carchelejo and Vilches. The contests of Adra (Almeria), in September, shine under their own, as well as the Villanueva del Arzobispo (Jaen) and the Veleda de la Fuensanta of Cordoba. In Ronda (Malaga) the Cante Grande Festival coincides with the Goyesca bullfights.

You can also visit the flamenco museum in Malaga.

Flamenco in Cadiz and Seville

The Fiesta de la Bulería of Jerez de la Frontera (Cadiz), the Potaje of Utrera, the Gazpacho of Morón, and the Caracolá from Lebrija constitute the fundamental nucleus of Gypsy singing in the province of Sevilla. On even years, Sevilla celebrates the Flamenco Art Biennial where one can see the most important starts of each speciality.