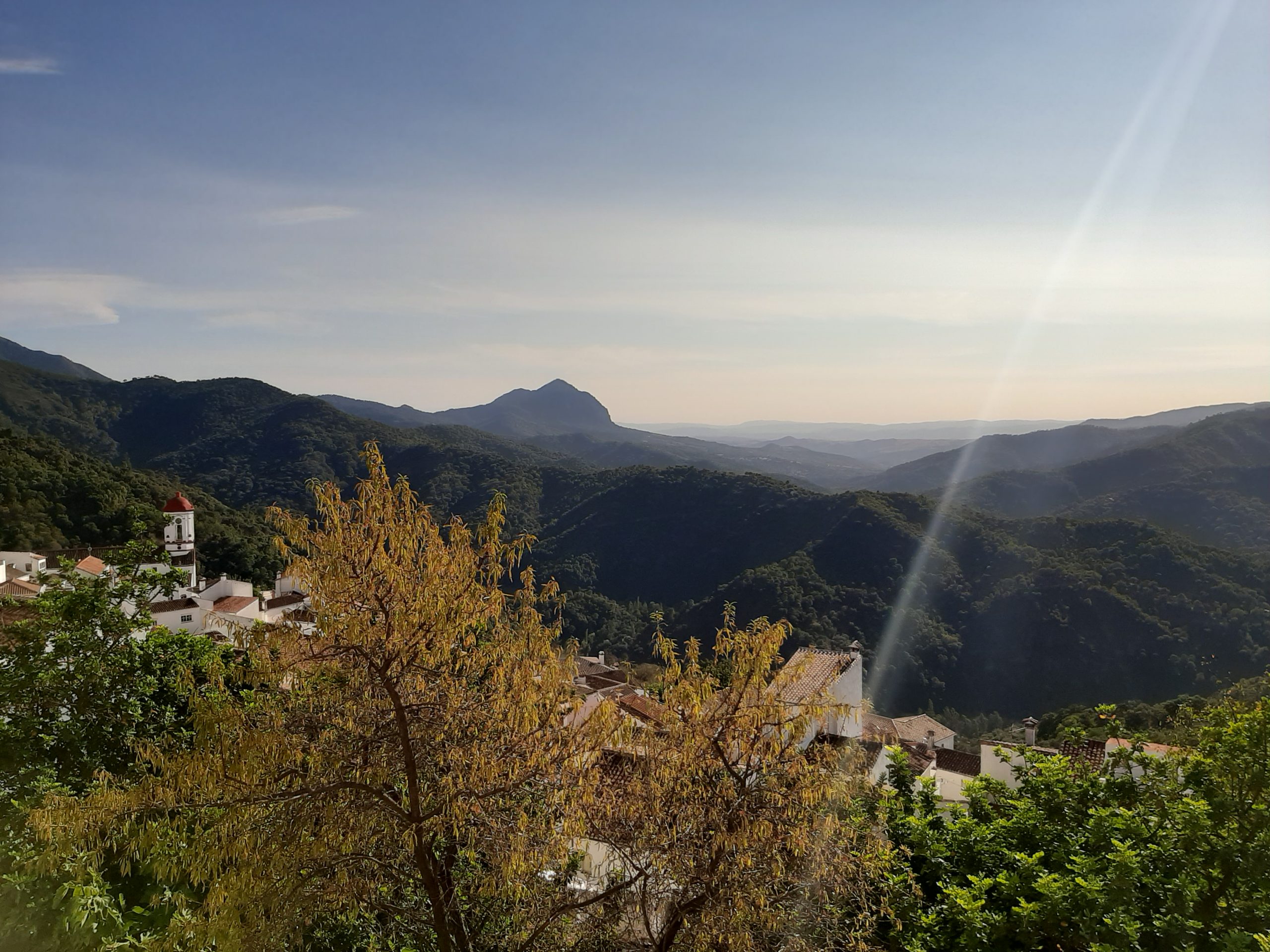 We echo an interesting initiative that we have found on the internet, the magical villages of Malaga, which due to their quality of life, heritage, gastronomy and nature are unique.

In the meantime, we have added some villages that we think are no less magical and special, discover them with us and your MalagaCar!

Currently there are 6 villages that meet the criteria established by the association: Alfarnate, Benamocarra, Canillas de Aceituno, Comares, El Borge in the Axarquia. And Atajate in the Genal Valley, in Serrania de Ronda.

We introduce you to each village and from the official website you can obtain a personalised Magic Villages Passport. This allows you to obtain prizes and discounts on visits to monuments and museums in the magical villages of Malaga.

An ideal plan for a getaway!

Magical villages of the Axarquía

Several of the magical villages are located in the Axarquia. It is the easternmost and most mountainous region of the province of Malaga, about an hour’s drive from the capital.

So you can choose to visit each village separately, enjoy its gastronomy and trails. Or you can make a route over several days into this majestic natural environment and its white Moorish villages.

Alfarnate is the highest village in the province of Malaga, situated 900 metres above sea level in the Axarquia. Due to this altitude, its climate is more mountainous and much more marked than on the Costa del Sol.

This village, like the vast majority of the villages of the Axarquia, is of Moorish origin. Therefore it has many typically Moorish streets or alleys, very narrow and twisting.

In Alfarnate we can visit the Museo del Juguete Antiguo (Vintage toy Museum), the hermitage Virgen de Monsalud and the Church of Santa Ana, both from the 16th century. The Venta de Alfarnate, the oldest inn in Andalusia, is nowadays a restaurant and museum about the banditry that took place in the area.

Next to the village is a natural viewpoint, the Santo Cristo hill. From there, you have excellent views of the valley and mountains. This natural park also has tables and benches for lunch in the shade of pines and fir trees.

In and around the village there are a dozen rural houses where to stay.

Would you like to take home a gastronomic souvenir from Alfarnate? Then stop by the Virgen de Monsalud Cooperative and take home some excellent olive oil.

The village is also famous for its delicious cherries.

Next to the village is the Morillas path, a circular path with typical Mediterranean vegetation and excellent views.

How to get there: https://goo.gl/maps/3Sp8ZFHQFJ2Sdxpw8

About 40 minutes from Malaga and very close to Velez-Malaga is located Benamocarra. It´s another village with a Moorish past that can still be perceived by the irregular and sloping streets with houses that adapt to the terrain.

In Benamocarra we can visit the old mill from the 18th century, the hermitage of San Isidro Labrador, the church of Santa Ana from the 16th century, or the patio of Amalia from an old Nasrid house with a well.

Throughout the village there are 12 ceramic murals, embedded in the façades. They tell the history, culture, customs, games and legends of Benamocarra.

The area is surrounded by mountains and thus enjoys a mild microclimate ideal for subtropical cultivation: Avocados, custard apples, mangoes and papayas, which have contributed to the richness of the traditional gastronomy.

There is a 3-star hotel in the village as well as several rural houses and a campsite.

How to get there: https://goo.gl/maps/WAbvzwDdiG9L2CWg7

Canillas de Aceituno belongs to the Mudejar Route, together with Arenas, Árchez, Salares and Sedella. In these villages you can especially appreciate their Muslim past.

Since the end of 2020 Canillas de Aceituno is quite popular  thanks to its spectacular suspension bridge of El Saltillo, also called the unknown Caminito del Rey.

However, hiking enthusiasts may already know this village situated in the foothills of the Sierra Tejeda. From the village centre starts one of the most famous routes in Andalusia, the ascent to the summit of La Maroma (2,100 m).

In the village and the surrounding area there are 10 rural houses.

How to get there: https://goo.gl/maps/5325CrsEfMquCXrw8

This village, once the capital of the region, is perched on a steep hill more than 700 metres above sea level. It definitely lives up to its tourist name “balcony of the Axarquia“, with spectacular views over the surrounding mountain ranges. 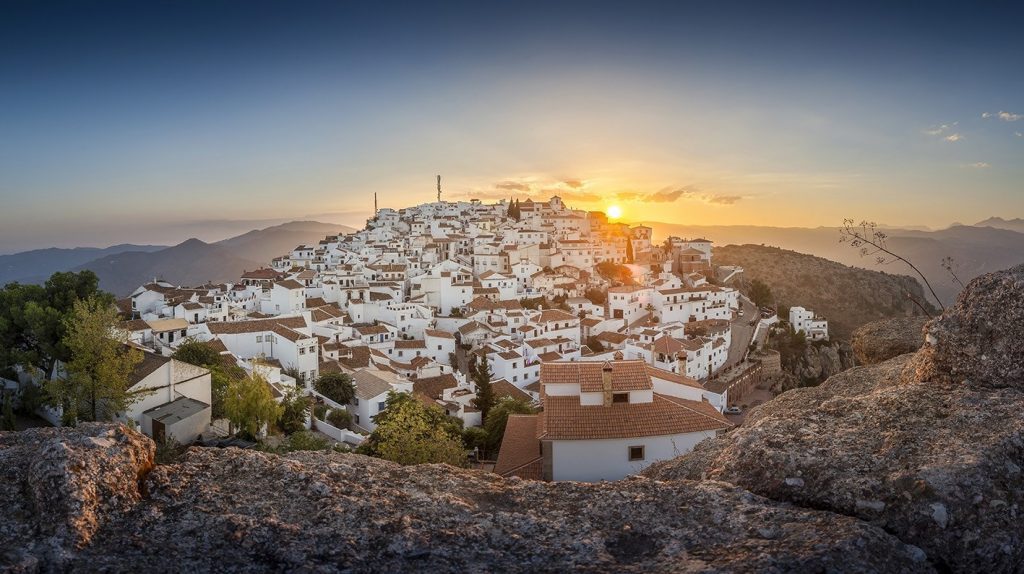 We can enjoy a stroll through the streets of Comares with its rich architectural and historical legacy, inherited from its Andalusian past, with the typical narrow winding streets and whitewashed houses.

There are remains of the old Moorish fortress which is also an excellent viewpoint, as well as the hill of Maxmullar, the cistern and the 16th century Nuestra Señora de la Encarnación Church. 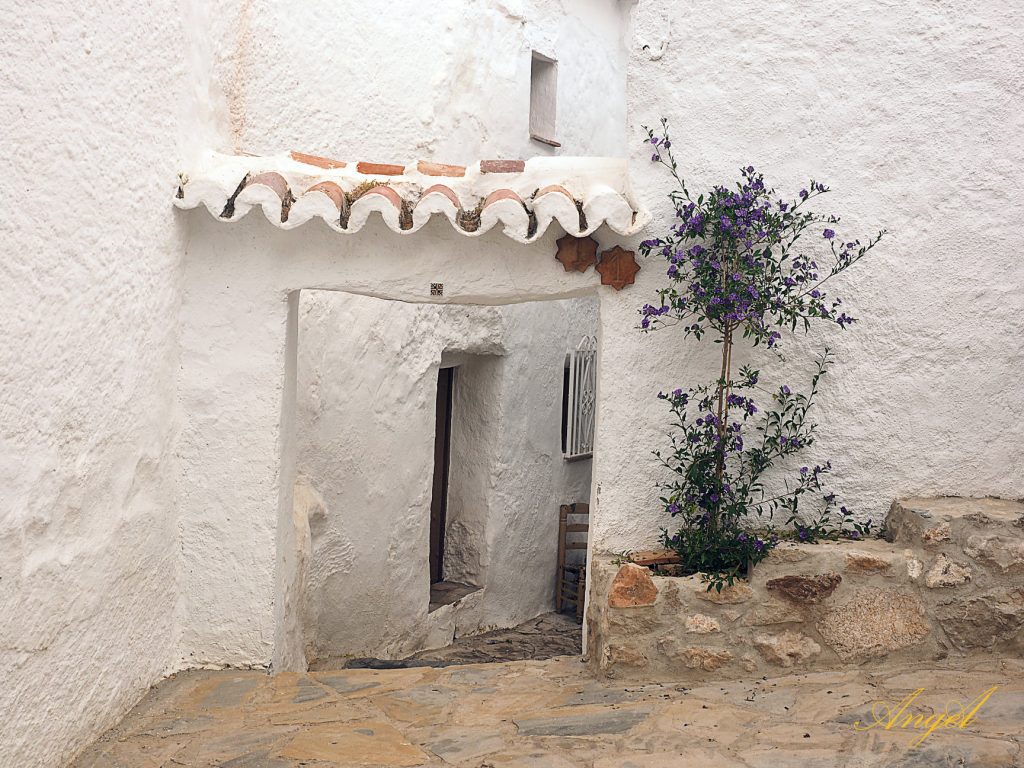 Comares historically dedicates to the production of oils and wines and the harvesting of almonds. The village belongs to the oil, wine and sultana route.

But what is most interesting about Comares is its offer in active tourism and adventure sports.

The village has no less than 3 via ferratas, one of them for beginners as well as a spectacular 436m long and over 110m high zip line.

There are also 30 climbing routes and 6 hiking routes of different levels (one of them for people with disabilities). More info in this link.

In and around the village there are two hotels and a dozen rural houses.

How to get there: https://goo.gl/maps/zSBBj5RQtK6oQ3jy9

This village 40 km from Malaga in the heart of the Axarquia is surrounded by vineyards and olive groves. It is synonymous with the Muscatel grape, which is why its wines and especially its sultanas are so well known.

El Borge, which is also known as “La Villa de la Pasa” (Sultana Village) is part of the sultana route of the Axarquia.

Like all villages of Muslim origin, its magic unfolds when we walk through its narrow streets and discover “enchanted corners”, as in the neighbourhood of El Rinconcillo.

We can find the Rosario church, built in the 16th century on the site of an old mosque, the 16th century crypt or the old fountain of Arab origin, the fountain of the horn. By the way, there are a total of 5 fountains scattered around the village. So you will certainly not go thirsty while climbing up the steep streets.

Within the village there is also a small botanical park that invites to sit in the shade of a tree. Hiking enthusiasts will find around El Borge 10 routes of low and medium difficulty to enjoy the day in nature.

In the village there are almost twenty accommodations, a hotel and rural houses to choose from in the vicinity of El Borge.

How to get there: https://goo.gl/maps/rVv5oChtjQMPf5ou7

Magical villages of the Genal Valley and Serrania de Ronda

The area of the Genal Valley and Serranía de Ronda is another inland area of the province of Malaga of enormous beauty and authenticity.

Atajate is located in the Genal Valley, between the Sierra de las Nieves National Park and the Sierra de Grazalema Natural Park. It is the village with the smallest population in the province of Malaga, with only 169 inhabitants.

In Atajate we can visit the old Parish Church of San Roque from the 19th century, the Arab Tower, the stone cross from the 16th century, the public washing place or the open-air Museum of Mosto, for which Atajate is well known.

Every year, on the last Saturday in November, takes place the Fiesta del Mosto. There you can taste the different varieties of must produced by each family, free of charge. A good opportunity to visit the village. 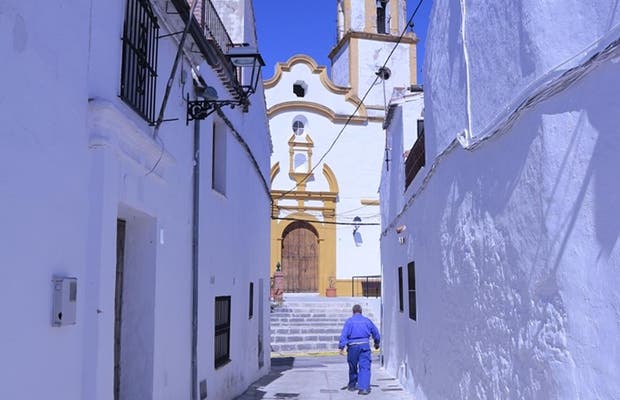 On the outskirts of the village there are two viewpoints: Mirador de los Castañares and Mirador de Atajate, from where we can enjoy magnificent views of Sierra de Ronda.

Lovers of adventure sports in Malaga are in luck in Atajate: There is a via ferrata with a monkey bridge and a Tibetan bridge. And there is also a new zip line that crosses the village.

The village has rural flats, rural house and hostel in the village.

How to get there: https://goo.gl/maps/EPGPHx2TuKJxMJv8A

In the heart of the Genal valley, the villages in this area are surrounded by lush chestnut forests and are criss-crossed by streams.

The area is especially attractive during autumn when the leaves change colours and we can enjoy the chestnut picking. But Juzcar is also famous for another reason:

The whole village is painted blue. This is not because it is twinned with Chefchauen, but because Juzcar was the Smurf village.

In 2011 there was celebrated the world premiere of the film “The Smurfs”. And the idea came up to paint the whole village blue, including the church and the cemetery. And so it remained after the popular vote of its 230 inhabitants.

There are 2 zip lines in Juzcar, suitable for both children and adults. This outdoor adventure park also has a Tibetan bridge and several climbing walls.

From the viewpoint of the village we can see it in all its blue splendour.

From the village there is a short route to the Mirador del Nacimiento las Zúas, passing by chestnut trees and old water mills and an old Roman road.

How to get there: https://goo.gl/maps/uu3mfaXS2uGBKpZ28

It is not yet on the official list of magical villages, but it should be! We have visited it and love it.

This small white village is famous for its Art Encounters taking place every two years. During two weeks international painters, sculptors, photographers or ceramists live together with the inhabitants of the village.

The pieces of art created during this time are permanently exhibited throughout the village, turning it into an open-air art museum.

There are already more than 200 artists who have left their mark on the village since 1994.

From one village to another there are old routes for walking or going to the river. Most of the routes run through lush forests of pines, holm oaks, cork oaks and plots of almond, olive, chestnut and cherry trees. That makes it very pleasant in summer.

We can also point out the numerous inns in the area, where you will find very friendly people and delicious homemade food.

How to get there: https://goo.gl/maps/RWpPAZ6vtRHqZpJ39

When is the best time to travel to Malaga?
Visiting the Costa del Sol with your dog The most beautiful White Villages of the Alpujarra Granadina