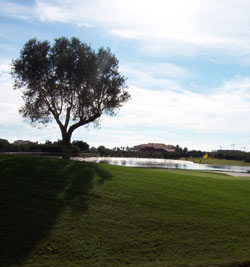 They have found evidences of different civilizations throughout the history, from the Phoenicians to the Romans, who used the richness of the area for its growth, something that later on was used by the Arabs during their reign in al-Andalus that lasted at least about 800 years.

A part of the roman road that went from Cástulo (today Linares) to Malaca (Málaga) passed through the municipality of Turaniana (Roquetas de Mar). Roquetas de Mar was for the romans an important point for the extraction of salta and the subsequent appearance of industries related with the processing of the fish and the creation of the ‘ garum’ which as exported to Rome.

At first the city was situated between the current Roquetas and Aguadulce, although due to floods it ended up being moved to its current location.

The arrival of the Arabs and their establishment in this place gave way to the creation of different fortifications amongst which we highlight the ‘Torre del Esparto’, the ‘Torre de Cerrillos’ and the Roquetas Castle.

The conquest of Almeria by the Christian armies did not bring great changes, Roquetas de Mar continued with its activity of salt extraction and fishing. It was during the middle ages in the 18th century when the inhabitants of villages nearby began to settle definitively in what we know today as Roquetas de Mar.

Having always been a fishing village, it wasn’t until 1950 when it began to feel the definitive impulse to become one of the most important populations in Almeria due to the agricultural development to which the tourist development has contributed with the creation of urbanizations adapted to the tourism like the Urbanization Roquetas de Mar and the Urbanization of Playa Serena.