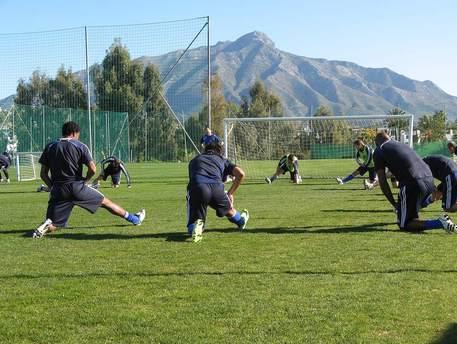 Let’s find out some of the popular Malagacar.com clients related to football. A lot of sports enthusiasts, amateurs, and professionals take advantage of mild winters on the Costa del Sol to train before competitions in any of the various facilities and fields.

What you may not know is that also other athletes are seeking these latitudes to escape from the low temperatures of their usual training sites and make it little more fun under the Andalusian sun. Thus, the sports facilities in Torremolinos are popular among Nordic competitive swimmers; in fact these athletes from many countries are regulars who usually come before major championships to train here.

Another group of important professional athletes are several European Football clubs. They often rent cars with us to move to Marbella to train and play a friendly match.

Currently are included in our database 19 international football clubs from Netherlands, Switzerland, Germany, Russia, Belgium and Norway as our customers.

If you are interested in the world of football, read on. Among some of Malagacar.com clients you can find the following football teams and players; please notice that the content below is from 2013 so the rankings could be different.

Russia national football team, which participated in two World Cups and became 3rd in the 2008 European Cup; it occupies 11th place in the FIFA ranking and its leading players are Arshavin, Pavlyuchenko and Kerzhakov. Also there is the FC Anji Makhachkala, of the Russian Premier League, ranking 95 in the UEFA ranking.

From the Dutch First Division, there is ADO den Haag, ranking 155th in the UEFA ranking, and highlighting Mike van Duinen.

From the Belgian First League, there is Club Brugge KV occupying the position 63 in the UEFA ranking, highlighting Eidur Gudjohnsen and Carlos Bacca with 25 goals. Also there is S. V. Zulte Waregem (in 2006/07 they participated in the UEFA Cup; last year they finished second in the league).

From Switzerland there are 2 teams in the Swiss Super League, FC Basel 1893; current champion of the League and Cup and occupying 35th place in the UEFA ranking. And the BSC Young Boys, with UEFA ranking 63. To date they have won 11 leagues and 6 cups. In addition there are 7 Swiss lower league teams which are FC Gossau and SC Kriens playing in Challenge League; and FC Aegeri, FC Zürich-Affoltern, FC Freienbach, FC Uster and FC Pfäffikon.

From the German Bundesliga, there is Fortuna Düsseldorf and from German lower leagues there is SC Preussen-Münster.

And last not least, from Norway, there are from the Norwegian Premier Division Rosenborg BK (UEFA ranking 109; they won the league in 2010) and Molde FK (UEFA ranking 184; their manager is Ole Gunnar Solskjær, former Manchester United player. They have won the last two leagues). And from the lower league, Strømsgodset IF (won the Norwegian Cup in 2010, currently playing in the second division).

Thanks to Malagacar.com clients

We have many more popular clients, including some Hollywood stars who visited Malaga. We thank every one of you trusting our service, no matter if famous or popular, every one of you count.

If you want to read reviews from Malagacar.com clients, please check our Malagacar reviews.

Most common fines and traffic tickets in Malaga
Fair fuel prices at MalagaCar.com and all about fuel policies Travelling with children to Malaga and the Costa del Sol
Subscribe